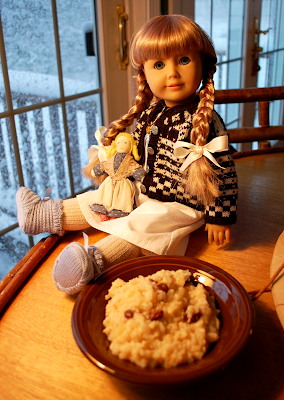 Which might sound a little unusual, but is actually quite good!

Comfort food hits the spot any time of year, but warm porridge has been a winter favorite since we learned how to cook with fire. I've recently rediscovered the joys of oatmeal, but I'll fully admit, I'd never heard of someone making rice porridge for breakfast before. Cream of wheat, grits, sure, but not something that basically sounded kind of like a warm rice pudding.

Not that I've ever actually eaten a lot of rice pudding before.

Still, with the good luck I've been having recently with authentic American Girl recipes, I was hoping this would be a stress free, fun way to spend a snow day. A couple speedbumps later, and I'm ready to share the results with you! 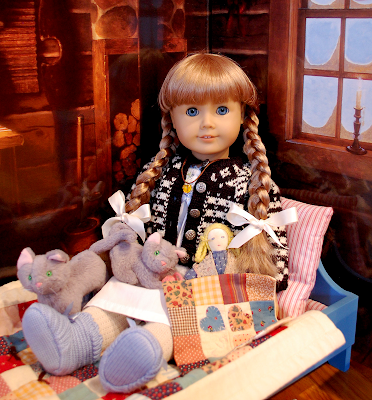 Something that's always pretty startling to think about for a modern person is just how much families like Kirsten's were giving up when they came to America. For a modern immigrant to just about any country, you can have favorite foods imported, or picked up at the local grocery store, or even ordered at a restaurant. Maybe it won't be exactly how your grandma used to make it and maybe it'll be a little less convenient to get, but it's more often than not possible to enjoy a taste of home in your new location.

This was definitely not the case in 1854. There were ingredients the Larsons would have used in Sweden that they just wouldn't be able to get their hands on in the United States, and some things like lingonberries wouldn't be readily imported to the US until well after their time.

Fortunately, some dishes could be adapted to even the modest prairie fare Kirsten and her family would have had easy access to, and one of them is Skansk grot, a Swedish rice porridge made with apples and grapes. Kirsten's Cook Book explains that this was often cooked as dessert, and then reheated the next morning for breakfast. Settlers would need to go into town and buy sugar, spices and rice to make the dish, but the fruit could be grown on their own land. Although Minnesota is known for its wild rice and has been historically thanks to its importance in the Ojibwa and Dakota Native tribes' foodways, the book says settlers weren't sold on its flavor and instead bought white rice that was sold in stores instead.

So, while Kirsten's Swedish pancakes would've been flavored with blackberries or blueberries, this at least would be more similar to the porridge she would have eaten with her Mormor back in Sweden. 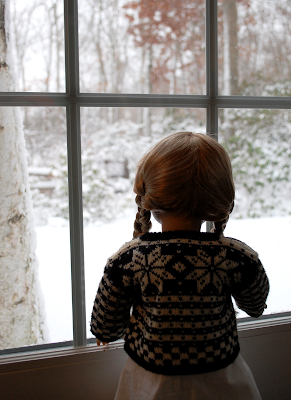 Last weekend, we had a ton of snow dumped onto us. It seemed like the perfect day to give this recipe a try!

To begin, you chop one large, firm apple into pieces and clean out the core and any other gross bits. Peel the skin off, and chop the pieces into little pieces. 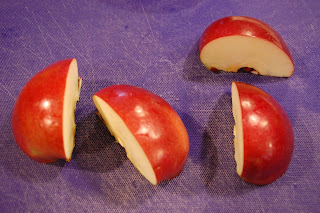 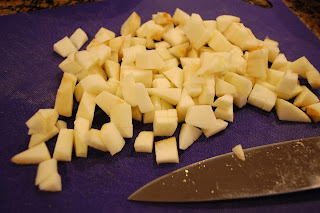 Next, you grease the bottom of a large saucepan with butter so they rice won't stick. You add one cup each of water and white rice, and then a single cinnamon stick for flavoring. You turn the burner onto medium heat, bring it to a boil, and then turn it down to a simmer. This cooks for 10 or 15 minutes. 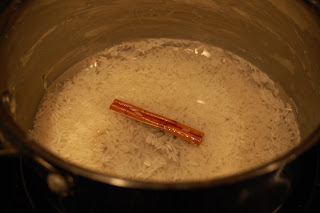 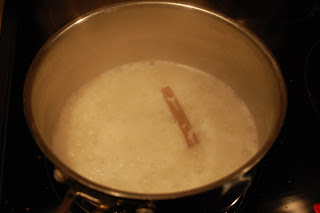 Next, you add in four cups of milk. This caused a bit of a crisis due to our snowbound state because we only had one already opened gallon of milk in the fridge. There was a lot of joking about me needing to use my milk ration wisely, and unfortunately, I didn't exactly. Apparently, the older milk is - even if it's not bad - will scald and curdle more quickly than fresh milk will. Since this had been in the fridge for a couple days and definitely was not freshly squeezed from a cow, bringing this to a simmer did actually scald it.

I soldiered on, though. I didn't have enough milk to try again. I turned the heat down to low, added in three tablespoons of brown sugar, the chopped apple, and 1/3 of a cup of raisins. I stirred it a few times, then covered the pot and got ready to leave it alone for about 45 minutes.

Note that at this point, I was pretty sure I could tell some of the rice had burned to the bottom of the pan. I'm not sure why this happened or how, considering I was pretty liberal with the butter when I was trying to prevent this exact scenario. 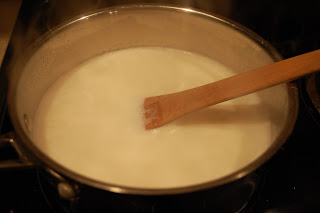 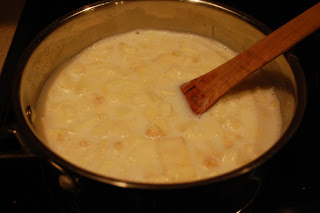 You're supposed to stir it a couple times while it cooks, and it's pretty cool to watch it thicken up. 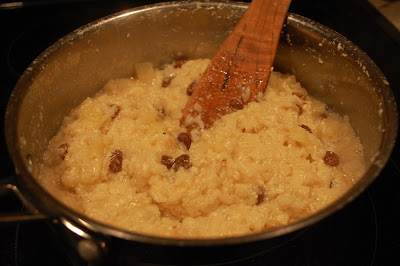 After 45 minutes, you should have a nice, thick porridge. Stir in a teaspoon of vanilla and pull out the cinnamon stick, and you're ready to serve! 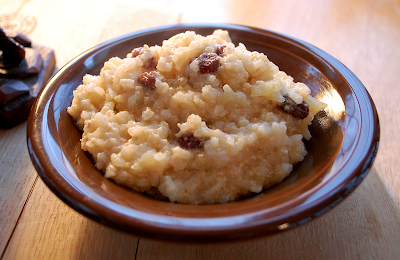 The cookbook recommends serving this with cream or honey, but honestly, I think it tastes sweet enough on its own. It was pretty tasty, but the texture was a tiny bit weird. I expected the rice to keep more of its shape, and instead, it kind of disintegrated and got very gooey. Mind you, I'd never had anything like this before, so this could be totally normal and mean a couple of you are laughing at me in the audience for being so naive, but it just struck me as weird. It's also very filling: you really don't need to eat a lot to feel satisfied and ready for the rest of your day.

My only complaints with this recipe were that like any recipe that works with cooking milk, there's a high risk of scalding it and I definitely ruined mine a little bit. It was still edible, and didn't do much to the texture or flavor of the dish - it didn't taste sour or burned or anything - but it was still frustrating to have it not go well. My second complaint is that the rice burned on the bottom of the pan, and I'm not sure what I did to make that happen. I followed the directions exactly, and it still burned. Oh well. Guess we might have better luck next time! This strikes me as an Official AG recipe that would require minimal adult supervision because there's not a lot of knifework or manipulating stuff on a hot surface, so it's definitely a good choice if you're looking for something you'd like to make with your child, or if they want to try their hand at some frontier cooking.

I don't think this is going to replace oatmeal for me, but it was really interesting to try something that would have made Kirsten and her brothers feel the same warm, fuzzy feelings I get when I have my mom's macaroni and cheese or pasta fagioli, and to learn about how their family could recreate dishes from the old country even out in the middle of nowhere, Minnesota. 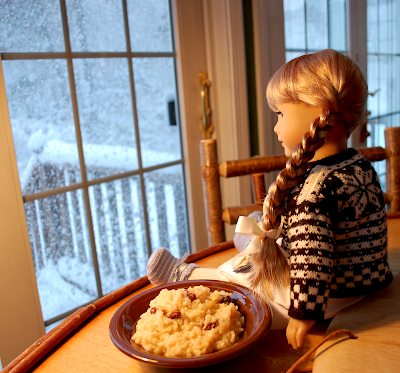 And we had plenty of leftovers for the rest of the snowstorm!
Posted by Gwen at 8:48 PM