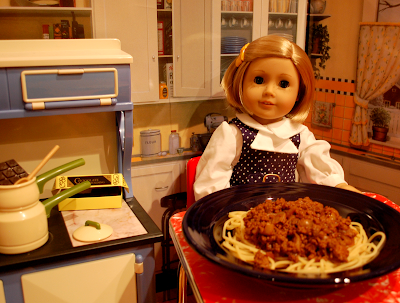 Is it chili? Is it sauce? Is it both?

Chili? What's this you say, Gwen? I thought we were doing an all chocolate spree for the next few weeks!

Don't worry, we still are! The chocolate's just a lot more subtle in this recipe than most of the other treats we've made on the blog. Cincinnati chili got its start in the 1920's, and it's definitely not the chili con carne you might be used to. I'd never had it before, but I'd heard of it, and it seemed like a really interesting addition to this line up of chocolate I've thrown together.

As an added bonus, the version we're making today isn't a dish that just shares its name with Kit's home town. It comes straight from Kit's Cooking Studio, so you can eat it knowing you're enjoying it the same way our favorite plucky girl reporter might have. If, you know. She wasn't fictional. 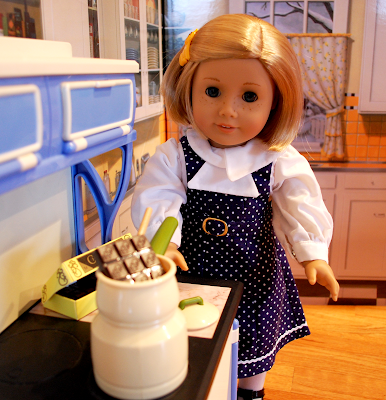 Cincinnati chili got its start in the 1920's. Tom and John Kiradjieff were Macedonian immigrants to Cincinnati with a hot dog cart who were looking for ways to adapt their Greek recipes in a way that would appeal to non Greek patrons. There's some debate about what dish in particular Tom Kiradjieff adapted to make the chili - just one of those things that's unfortunately lost to history - but the sweet spices that make up the chili clearly show its Greek roots. Originally, spaghetti was cooked in with the chili, but eventually, it became a base along with the hot dogs the brother still sold for the chili to be poured on like a thick meat sauce. Like many good ideas, the idea took off and became a mid western classic. You can still order Cincinnati chili from chili halls all over the country!

Aside from it already being a staple in Cincinnati food culture by the time Kit's stories kick off in 1932, it's not difficult to see how this would be a good meal to serve your family during the Depression, even if you made it yourself and had to cut down on a few spices thanks to a limited budget. Soups and stews were popular during the Depression because they were easy to stretch and improvise to feed a crowd, and while this is generally something that straddles the line between a soup and a sauce, I think the point still stands.

To get your chili started the authentic Kit Kittredge way, you take two pounds of ground meat and put them in a large pot. This gets cooked on medium high heat. 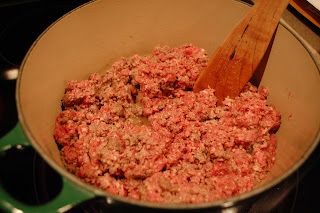 Once your meat is browned, you take it out of the pan, dump it in a strainer and collect all that excess fat in a bowl. You put the strained meat back in the pan, and leave the bowl of fat aside to congeal so you can throw it away later. Or find something else to do with it, if that's your speed! Waste not, want not, as Aunt Millie would say.

Next, you add two medium sized onions - which have been diced - to the pan, and put in your savory spices. The recipe emphasizes that you can cut down on the spice if you want, but because we all like our chili hot, I used two tablespoons of chili powder, two teaspoons of ground cumin, 1/2 of a teaspoon of garlic powder and 1/4 of a teaspoon of cayenne. Add in a tablespoon of vinegar, and then cook this all together for five minutes. 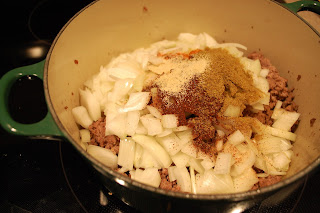 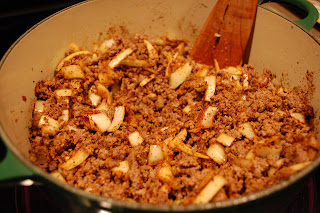 Now comes the part you've all been waiting for: the sweet spices. Moussaka and saltsa kima - both contenders for the dish that inspired the chili - feature spices like cinnamon and allspice, and this does, too. But, there's another sweet spice added in here, and I bet you can't guess what it is!

Oh wait. I spoiled it already.

Well, you add a cup of water and one 15 ounce can of tomato sauce to the pan, and then one teaspoon each of allspice, cinnamon and unsweetened cocoa powder. Mix it all together... 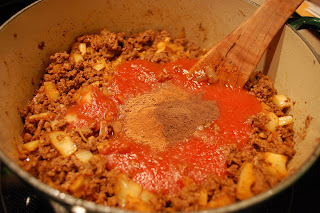 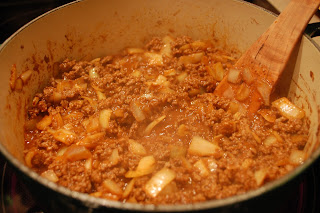 And you're ready to let this simmer for an hour! The recipe recommends checking on it every once and a while and giving it a stir. 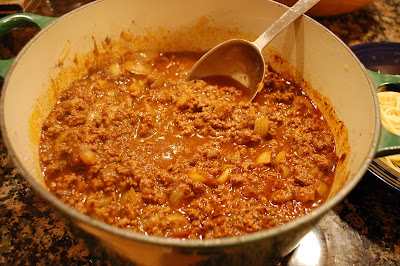 This can be made in advance and left on a low heat on the stove for a couple hours without causing any harm to it.

Twenty minutes before you're planning to eat dinner, you make your spaghetti. The recipe calls for a pound of it, and you can just make it according to the rules on the packaging. 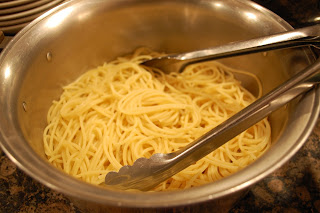 This, along with the fact that the recipe doesn't have beans and a very different spice profile than other chili recipes makes some chili experts (and some food snobs) to consider this not "real" chili, or just a bad version of a good thing.

As much as I like the kind of chili I grew up eating, I think writing something off without trying it, or at least acknowledging that it has a different history and inspiration, is kind of lame. Kind of really lame. 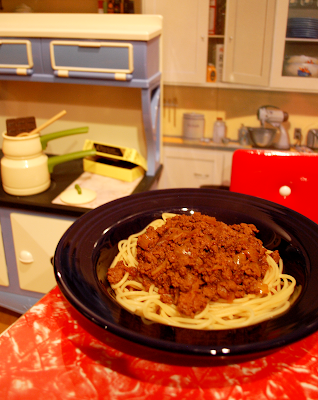 This is Cincinnati chili at its most basic. Apparently, as the dish grew in popularity, people began wanting to add things to the basic recipe, so the Kiradjieffs came up with an ordering system known as the "way" system. 3-Way means you want grated cheese on top, 4-Way means you want a spoonful of chopped sweet onions on top before the cheese, 5-Way means you want red beans added to everything else. Having never had it before, I wanted to try it at its simplest so I'd have a baseline to compare it to if I make or eat it again.

So, honestly, I was really, really unsure of what to expect when I made this, to be totally honest. I love chili, but chili without beans is weird, chili over pasta is super weird, and sweet spices in my chili is super, super weird, but it smelled nice the entire time it was cooking, and I was excited to see what it tasted like.

As it turns out, this is definitely not your average chili recipe, but that doesn't mean it isn't tasty. Although you can definitely taste the sweet spices, it's not a sweet dish, and while all my taste testers love beans in our chili (so we were all a little worried we wouldn't like it), we didn't miss them. The only real criticism we had was that everyone thought it could use more salt - the recipe doesn't call for any, and people noticed. This is something you could just warn your guests about in advance, rather than adding any to the pot yourself, or you could just put in a teaspoon or two and hope for the best.

And eating it over pasta wasn't as weird as I thought it would be! Honestly, it really reminded me of a thick Italian meat sauce. It was pretty easy to make, fed a crowd, and is definitely something I'd eat again. Another winner from American Girl! If only they still did historical character cookbooks.

Okay, so maybe this was a bit of a stretch saying this is a chocolate recipe, but it's still an interesting way cocoa powder has been incorporated into American food culture. Cincinnati chili might not fit your definition of chili either, but it is tasty, and worth giving a shot. Come on, be adventurous! Take a moment to appreciate how two enterprising brothers took familiar recipes and turned it into an American classic. 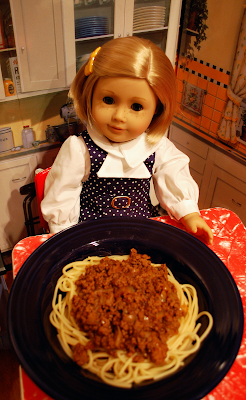 Next time, we'll have to try it with some of the extras!
Posted by Gwen at 6:35 PM