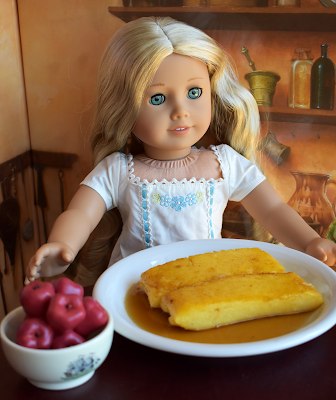 The breakfast of choice for most of your favorite historical characters!

Some recipes are so incredibly simple that they can stick around as a staple on family tables for generations. Take hasty pudding for example: this simple hot breakfast would've been an easy option for Caroline's mother or grandmother to whip up for breakfast, and it's something Caroline could learn to make herself as soon as she was old enough to be trusted near an open fire.

But this dish has a much longer history, and is an appropriate breakfast for characters well beyond Caroline's time. Read on to find out more about the history of this breakfast staple! 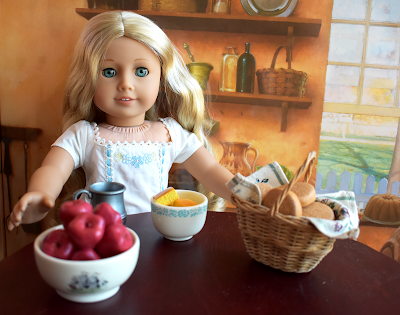 The earliest hasty puddings were made with wheat flour in Britain, and were so called because it was an easy dish to make quickly. As an added bonus, it didn't involve many ingredients, making it simple to prepare and pretty budget friendly. The flour would be cooked in milk or water until it had a porridge like consistency, and if you were lucky, it could easily be topped with syrup, spice or fruit as a way to make a fairly boring dish a little more interesting.

Unfortunately for early British colonists to the Americas, flour was in short supply, so this traditional way to start the day became tricky to make... that is, until they were introduced to corn meal by indigenous populations. Corn quickly became a staple grain for European colonists, and dishes like hasty pudding were adapted to use less flour, or omit it entirely in favor of corn meal.

Corn based hasty pudding has some similarities to Indian pudding - a dish I've made before - and it's very similar to polenta, but at its simplest, it's just cooked corn meal and water. To make your own hasty pudding at home is very easy: mix 1/2 cup of corn meal with 1 cup of cold water. Boil two additional cups of water and add the corn meal mixture. Cook it over medium heat until the mixture softens and thickens, about 10 to 15 minutes.

You can serve it hot - coated with fruit, syrup, molasses, or other topping of choice - or you can pour it into a greased loaf pan and let it chill in the fridge (or on the counter if you want to be more period correct) overnight. Slice the congealed log up and fry it in butter until browned on all sides and again top with something tasty. 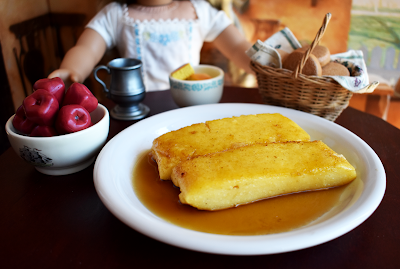 Hasty pudding is - as you may have guessed - pretty boring. I mean, it's just cooked cornmeal. It's also definitely not the healthiest of breakfasts when it comes down to it, even before being fried in butter and slathered in syrup as I've done. Corn isn't exactly totally nutritionally garbage, but it's definitely not the most valuable breakfast cereal you might choose to enjoy, as it's lower in fiber and higher in sugars than a lot of other options. Having a heavily corn based diet can also be pretty nutritionally damaging, as seen in many boarding schools or monasteries where white settlers fed corn products to Indigenous populations because corn historically was cheaper than wheat flour. This would have needed to be well balanced with other foods to provide Caroline with the energy she needed to help out around the house, farm and shipyard. 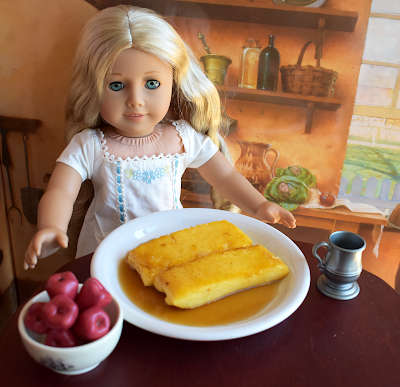 Frying it definitely helps improve the flavor and texture, and it likely helped make it an appealing option for busy post colonial families like the Abbotts because leftovers could be spruced up into something a little different, rather than being a pale imitation of the first round or something you needed to eat all of in one sitting.

All that said, not sure this is ever going to enter into my regular breakfast rotation, but it's an interesting look at something that would've been a familiar breakfast item for most of the American Girl historical characters. 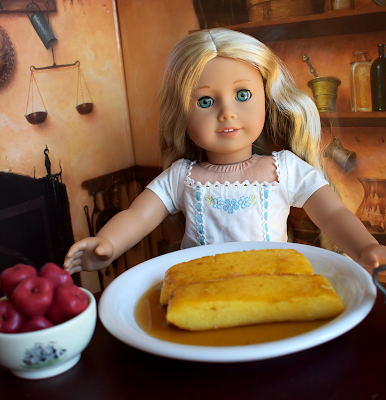 Have you ever had hasty pudding?
Posted by Gwen at 3:00 AM