A tasty beverage for a cold day and sticking it to the mother country!

A few years ago, my family and I went to Philadelphia for a long weekend and made a discovery. A delicious discovery. One that I now seek out and hoard whenever we go to historic sites, because it is tasty and different and pretty much the best thing ever, which I know I say a lot, but this time, I mean it.

I'm talking about American Heritage Historic Chocolate, the tasty, historically accurate treat that gives us a peek at what it was like to eat, drink and bake with chocolate back before people could just got to the store and buy a Hersey bar. The recipe is the product of a lot of historical research on the part of Mars Chocolate, referencing historic recipes by Hannah Nash, John Nott and several more. Unlike the chocolate we eat today, it's got a really interesting blend of spices in it, leaving it less sweet and more complex in flavor than a modern bar of chocolate. Sometimes, you even get a bit of salt in the bite! It's different, and definitely not for everyone - my brother, for example, can't stand it. But I love it! I can't get enough of it, and as you can see, I might have overindulged when we went to Williamsburg. American Heritage chocolate can be purchased in a couple different forms. There's a stick, which is mostly meant to be eaten like a normal candy bar, a block which can be shaved to be added into baked goods, and powder that can be turned into hot chocolate. You can order it online through Colonial Williamsburg's Marketplace website! The official website of the brand also has a list of other places you can purchase it. Today, we're mostly going to be talking about the hot chocolate!

In Felicity's time, chocolate was a little more commercially available than it was, say, by the time Jamestown was settled in 1607, but it still wasn't something people really went around just noshing on blocks of. People drank hot chocolate before the tax on tea at home and in coffee houses, where people met for business, social and political reasons while visiting places like Williamsburg, much like they would at a tavern. Coffee houses were also a place for people to read publications like Thomas Paine's Common Sense and other books and magazines that discussed serious social and economic issues. As the political situation in the colonies grew more intense and especially after the tax on tea, it was a lot more common to be served hot chocolate or coffee. They needed something else to drink, so they turned to coffee, herbal teas and hot chocolate! Unlike modern hot chocolate, people didn't guzzle down grande sized containers of chocolate and milk - this was still a pricey treat you broke out for special occasions, and their version of hot chocolate was a lot thicker and richer than ours.

Chocolate was served from fancy silver pots. Back in the day, Felicity actually used to have a chocolate set you could purchase as part of her birthday/spring collection for a ridiculously high price, but considering the thing was made of real metal and might even have been silver or something ridiculous like that, I guess it justifies it. Unfortunately, that never made it into my collection, so I can't show you the doll sized version. Or a real person version for that matter! Contrary to popular belief, we don't have a lot of full sized historical replicas in the house.

Figuring out what to serve this in was a little difficult. Modern, human sized tea cups are a little too big for four tablespoons of liquid and chocolate, and I seriously really didn't want to drink a human sized mug or cup full of it in the first place. I can't stress enough how rich this is. Tasty, but not something you need a thermos of!

But then I had an idea. Back before Mattel bought American Girl, there used to be a Felicity Merriman themed tour of Williamsburg, and in association with it, several of the gift stores on property sold a girl sized replica set of the tea cup from Felicity's tea lesson set. It came with two tea cups, two saucers, and a tea pot, along with a card with some information about the set. I don't remember how much it retailed for - my mom bought it for me when we were in Williamsburg when I was nine and had just gotten Felicity for my birthday earlier that year - but it's very pretty and looks just like the tiny tea cup. I think the color's a tiny bit different, though - the doll sized cup is a little more indigo than true blue, but they're a very close match, and I was excited to have a reason to break them out. In the future, I'd like to do a post that talks more about tea in colonial America, but since this post is about chocolate, that's what we're going to keep talking about.

The box recommends adding the chocolate and hot - not boiling! - water to a cup in equal parts. As I said above, the box recommended amount is two tablespoons of chocolate to two table spoons of water. Believe me, this is so rich, you'll be happy you're only having this much of it.

Even if you're not, you can still always go back for more! Or sneak in a third or fourth tablespoon, if you really want. 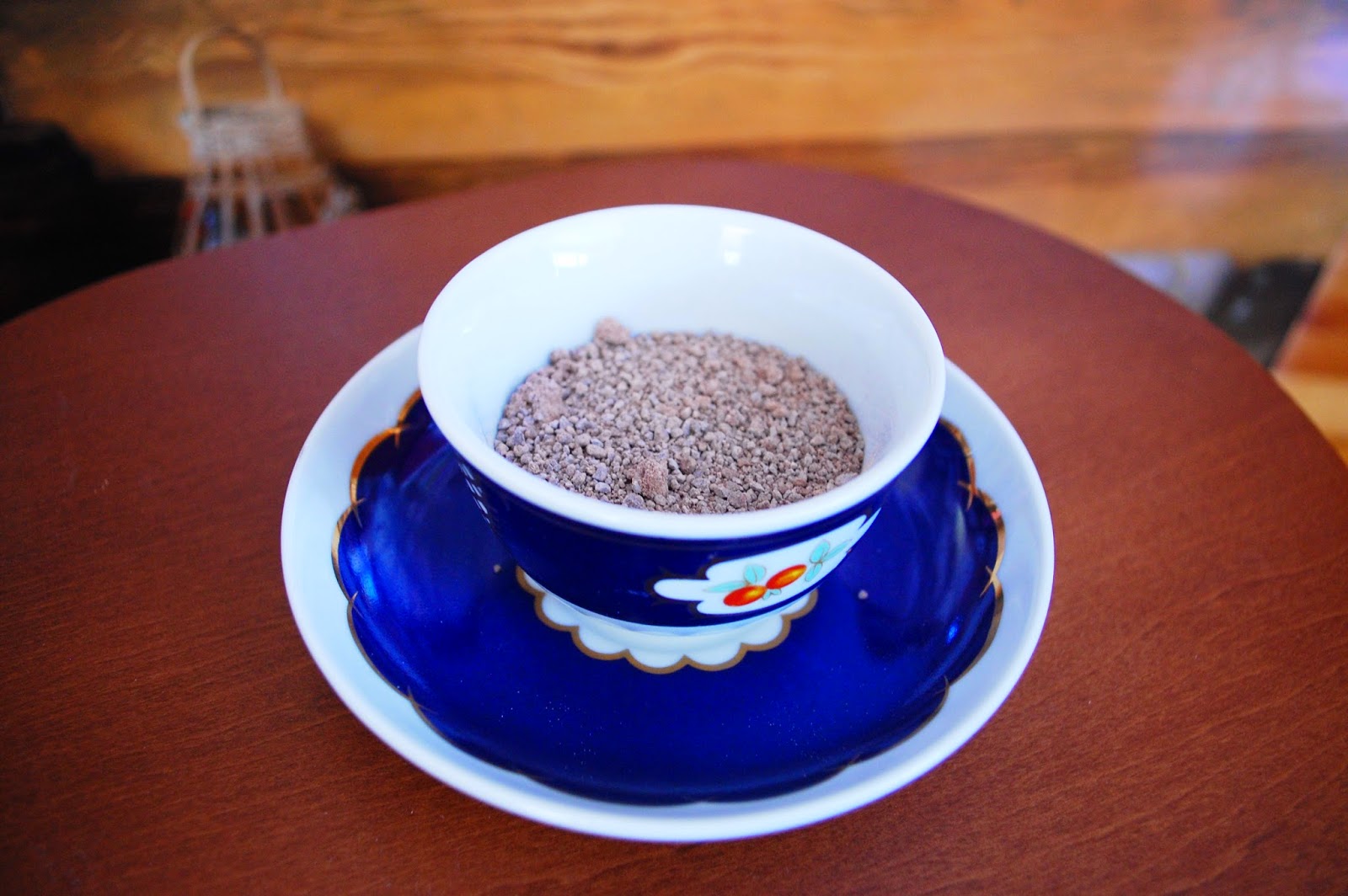 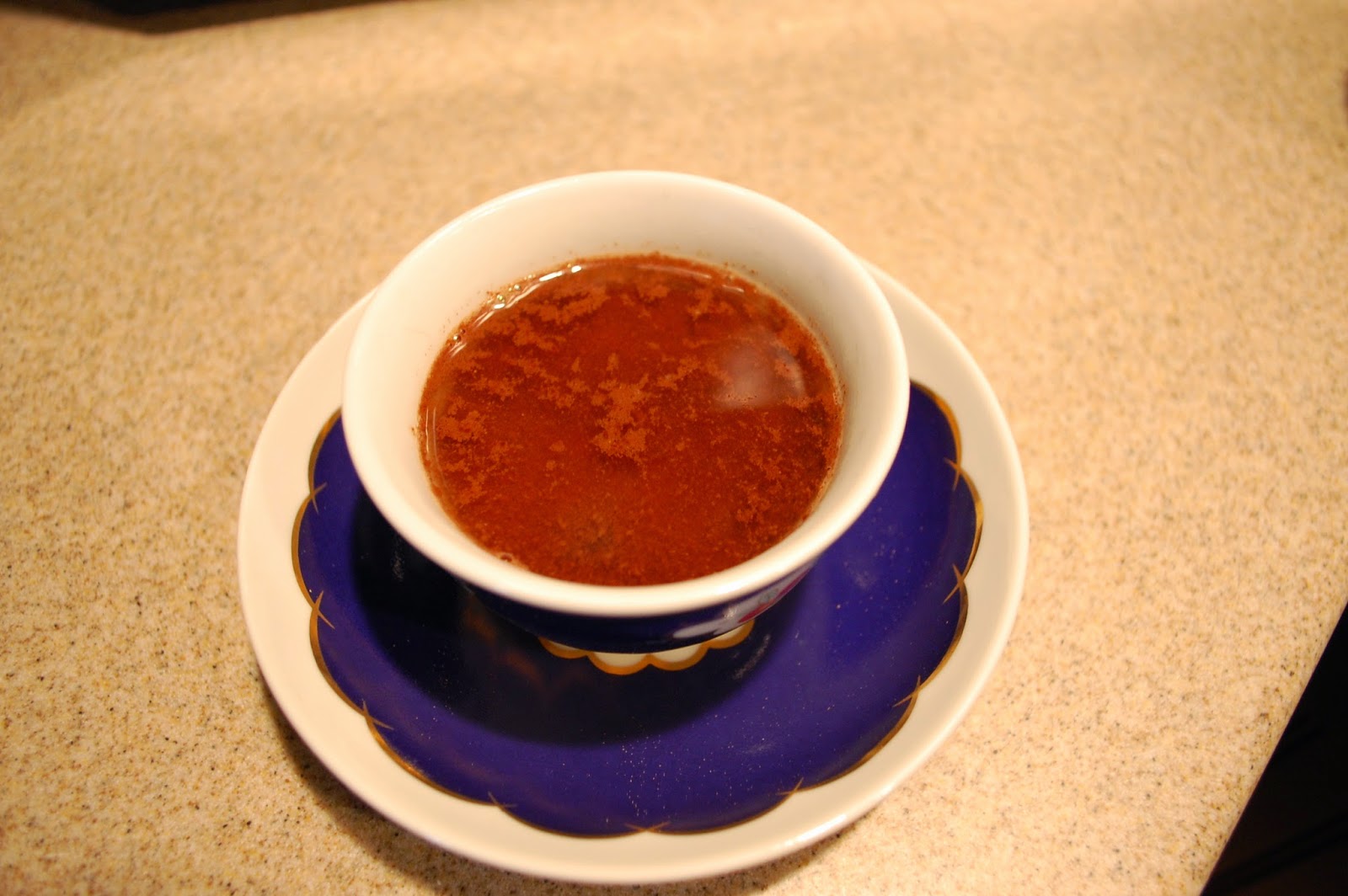 This needs to get really thoroughly whisked to make sure the chocolate's fully melted into the cup. The water should be hot enough to do this by itself with the help of a fork or small whisk. It makes your cup look a tiny bit messy, but it'll be worth it. The result is a thick, thick hot chocolate. You're seriously just drinking slightly watered down melted chocolate, and it tastes like it. Since I'm a big fan of this particular brand of chocolate, I really enjoy drinking it even if this was definitely more than enough for me. The box notes that you can try recreating the recipe with semi-sweet chocolate if you run out of the powder using the same 1:1 ratio, but I don't think it'd come anywhere close to this in terms of flavor, and might actually be sort of overwhelming. What's nice about this chocolate is that it's not just one flavor you're getting, which does help break it up a little instead of getting you to the point where you're like "okay, I've had enough of tasting this one thing in my mouth." You sip it rather than chug it, and obviously, it doesn't take long to prepare, even if it does take a tiny bit more effort to get it dissolved than a pack fo Swiss Miss.

So that's your introduction to American Heritage Historic Chocolate! As you can see, I also bought a baking block and way more sticks than I probably should have, so this is not the last you've seen of American Heritage chocolate on this blog! I'm very excited to try making a chocolate cake, although I might cheat and use a recipe with baking powder. Making an authentic pre baking powder or soda cake seems totally intimidating to me!

Although let's be honest, it wouldn't be the first time I'd done something a little crazy on this blog!