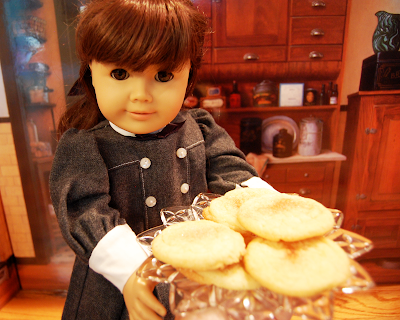 My sister started college about a week before I got the idea for making this blog, and so she's been trapped far away from home listening to everyone talk about all the fun stuff we've gotten to eat without her. I've promised I'll do something nice for her when she's home on break, but since she asked my mom for some stuff she wanted from home to be shipped to her, I decided hey, why wait until Thanksgiving to make her something? And while I was at school, getting baked goods in the mail was always, always a fun thing.

I decided to try and find a recipe Samantha would have enjoyed because Samantha was my sister's first doll, and she's become more of a fan of the Edwardian era since starting to watch Downton Abbey, so it seemed appropriate. Admittedly, Downton Abbey has a more in common with Rebecca than Samantha when it comes to timeline, but Grandmary definitely would feel right at home with the Crawleys.

Picking a recipe was more difficult than I thought it would be. There are a lot of recipes for Victorian and Edwardian tea cookies, but a lot of them either sounded too exotic, too boring, or like they wouldn't go through the mail system well. Since I just did a ginger spice cookie, I didn't want to do a gingersnap or anything like that, and for a while, I was a little stumped about what to pick. 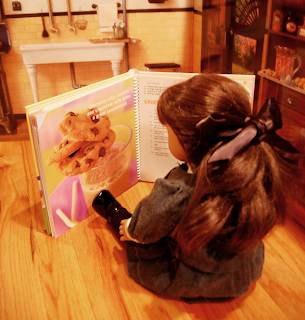 Someday we'll get to make chocolate chip cookies. But today is not that day.


Eventually, I discovered something interesting: although its exact history is a mystery, the Snickerdoodle first appeared in cookbooks by name in the early 20th century, with one of the earliest recipes being published in a 1902 cookbook. I definitely like snickerdoodles, and so does my sister, so it seemed like a pretty safe bet assuming they don't turn into crumbs by the time they get to her.


Now while I like snickerdoodles, I didn't know all that much about where they came from, and during my snooping around for a good recipe found out a lot of interesting information about them. No one knows where this cookie got its name, and there are a variety of theories as to where its true origin lies. People aren't even sure where the word "snicker" came from on its own! Some people attribute it to a version of the Dutch word "snekrad" or the German "schnecke", but no one is entirely certain. Why "doodle" was added on the end of the cookie's name is anyone's guess, and a popular theory is that the name was simply supposed to be a nonsense word from the beginning, and it doesn't really mean anything. There's also some debate about whether or not the cookies are from New England or Pennsylvania, but basically it's an American cookie that was first really put into cookbooks around the turn of the century.

While most modern Americans are familiar with snickerdoodles being more or less a sugar cookie with some cinnamon and sugar on top, historically recipes have included dried fruit and nuts too. But the 1902 recipe from A Collection of Tried Recipes Contributed by Estherville Housewives is virtually identical to the snickerdoodles I'm familiar with, so I decided I might as well give it a shot. 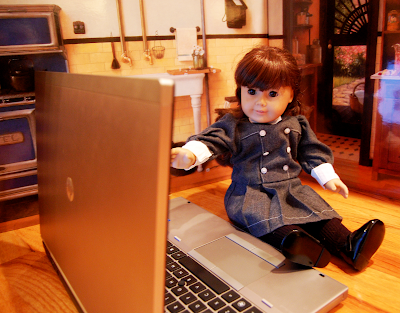 The one thing that seemed like it might be a problem was how simple the recipe was. I found it posted here, and you can see how few instructions it gives. Most recipes walk you through step by step or at least give you an idea of how long you need to cook them for, so I found some other snickerdoodle recipes to get an idea for how long they needed to be in the oven for, and at what temperature, and then dove right in.

Fortunately, my years of experience baking cookies let me do some trouble shooting without too much issue. I put all the wet ingredients in one bowl and mixed them together before even assembling the dry ingredients. This is the only place I really went off recipe for, because the original calls for no vanilla, and I decided a teaspoon of vanilla never hurt anyone. You can see the evidence of my tampering in the second picture on the right. 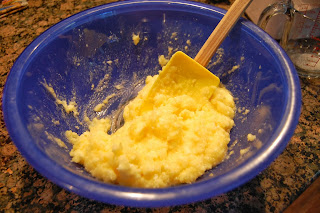 Next was time to mix in the dry ingredients and get the dough started. One thing that surprised me was that the recipe didn't call for salt, while the modern recipes I looked at did. The modern recipes also called for corn syrup and a couple more spices, which makes this one a lot less complicated in some ways, and saved me from having to run to the grocery store again!

This dough was grainy. I was actually sort of confused at first when I started mixing it because I wasn't sure if I was supposed to hand knead it instead of using a mixer, and might have given that a shot before resolving to just wash up and use the spatula instead of the mixer. It took a while to get it workable, and it was a very stiff dough once I worked all the flour in.

I used a cookie scoop to get an even size, mixed up some sugar and cinnamon, and sprinkled it over the cookies. I just used a spoon, so most of them sort of have a stripe of sugar and cinnamon on top instead of a nice, evenly spread topping. I might try to experiment with a better way of doing it if I ever make them again, because while this worked just fine, my methods probably could do with some improvement. 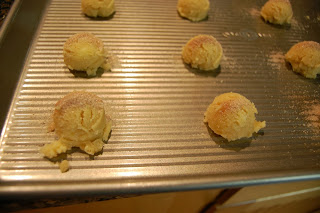 Again, I wasn't sure how long these needed to cook, and I really didn't want to burn them, so I put them in for eight minutes at 375 degrees and kept a close eye on the first batch. I managed to snag a picture of them at around minute four in the oven. 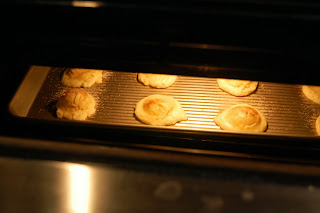 The cookies are supposed to rise a little bit in the oven and then collapse on themselves, which makes them very flat and crispy around the edges, but chewy on the inside. You can see some of that happening in the above picture.

They seemed pretty soft when I took them out of the oven at minute eight, so I left them in for about two more minutes, and put each other batch in for ten minutes. This gave them the perfect texture and definitely didn't overcook them at all. 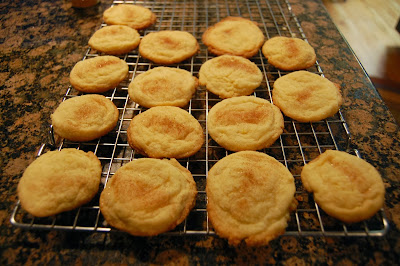 And there we go! They're pretty different from the store bought snickerdoodles I've had before - those tend to be really flaky, crumbly and soft. These are definitely crisper, but the chewiness in the middle makes them a hit amongst people who like softer cookies too. The spice is definitely way more subtle than most spice cookies are, so it's got more of a sugar cookie taste than anything else, but the cream of tartar definitely adds something different to it. It's almost like a bit of bite, or sourness, or maybe it's bitter, but it's nothing unpleasant, it just adds something extra and different to the cookie's flavor.

The recipe makes a lot of cookies. Here's Sam next to all the ones that weren't devoured right out of the oven, keeping in mind that quite a few of them were eaten while they were cooling, and I might have snitched a lot of the dough while I was waiting for the next batch to bake: 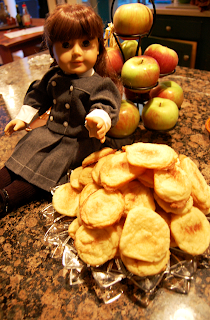 We brought some over to my aunt and uncle's house, and even that didn't make too much of a dent in the amount we had left over. Fortunately, I'm having some people over tomorrow, so hopefully they'll be able to help us out a little with them. 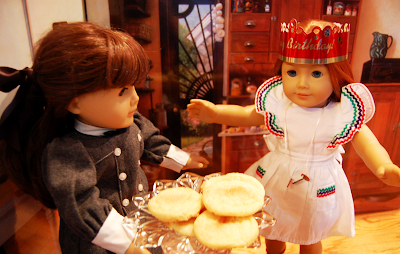 I'm going to try to do something Emily themed later this week, because I already had things planned for today and tomorrow and couldn't reschedule. I'm just not really sure what that's going to be, so if anyone has any suggestions, definitely let me know! I probably should make a cake or a fruit tart, but like I've said time and time again, we can't live off desserts, as much as we'd like to. Then again, there were some other interesting tea sandwiches I came across during my hunting for our last tea time, so maybe there's something there.

Until then, I've got a care package to help pack. Fingers crossed that she likes the cookies! 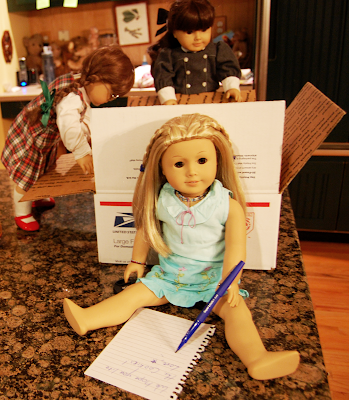