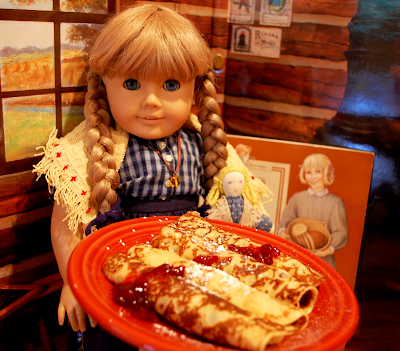 Not your average pancake!

Almost every culture has some version of a pancake, whether they be soft and puffy, or thin and eggy. They're a perfect vessel for almost anything, from jelly to meat to cheese to savory spreads, and everything else in between, which means you can enjoy them almost any time of day or night!

Swedish pancakes - or pannkakor - are yet another dish with a slightly obscure history. Although they or similar dishes have probably been enjoyed by Swedish families since ancient times, the first reference to them in text comes from the 1500's, and as it isn't a recipe, we aren't too sure what kind of pancake this was, exactly.

The ones featured in Kirsten's Cook Book are fried, and usually eaten on Tuesdays for dessert after a dinner of pea soup. Originally, frying the pancakes was a tricky business because before wood stoves, doing this over an open fire meant you were at a pretty a high risk of burning yourself! Once you were less likely to give yourself third degree burns making dessert, the dish got more and more popular, and probably would have been something the Larsons brought with them to America to remind them of home. 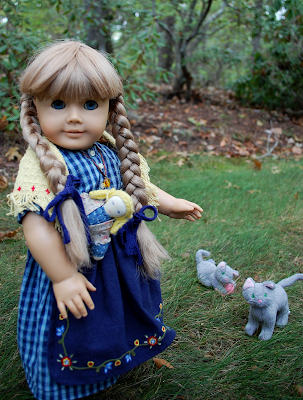 Coming from a part of the country that doesn't and never really has had an especially large population of Scandinavian immigrants, I actually haven't had much opportunity to sample Swedish food, and especially not savory items. We did attend an event at a barn in Massachusetts when I was little that was Kirsten themed (and sponsored by the Pleasant Company back when they hosted tours and events for each of the historical characters!), but I was super little and don't remember much of it. I know we definitely had Swedish meatballs and made a traditional straw horse, but everything else is a little blurry. My other culinary adventures into that neck of the woods have really just included more Swedish meatballs and... that's it.

Thus, I really had no idea what to expect when I sat down to start making these. The ingredients made it sound like it might be similar to a crepe, but as soon as I started mixing the batter together, I realized I was probably going to be wrong.

You begin by melting down six tablespoons of butter in a skillet. You take it off the heat to cool off a little, and then crack two eggs and put them in a mixing bowl. These get joined by a half cup of milk and whisked for two minutes. A cup of flour goes in all at once, and this all gets mixed together into a pretty thick batter. 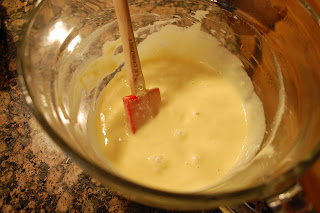 For a while, I wondered if this meant the pancakes were actually going to be a lot thicker than a crepe, but adding another cup and a half of milk made it quite runny again. The melted butter goes in with a teaspoon of cinnamon, and then this all gets mixed together again. 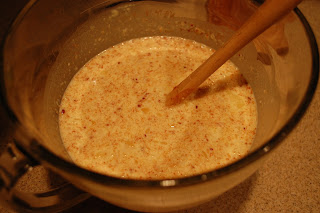 Because the butter was still a little warm and the milk was straight from the fridge and thus pretty cold, the butter kind of separated a bit in the batter, making it a bit chunky, and the cinnamon definitely floated to the top of the bowl when it settled. It required a good couple stirs every time I went to make another pancake to make sure I wasn't just skimming all the good stuff off the top.

I cooked the pancakes in the same pan that I melted the butter in, so there was still a little butter in the pan. I also added the tablespoon of oil the cook book asks for, and headed the skillet until it was quite hot. The cook book says to take about a tablespoon of batter, drop it in the pan, and let it cook for about a minute or two over medium high heat, or until the edges turn brown. This took a couple pancakes to get right, but after a while, you start to get a good sense of when a pancake's ready to be flipped and then ready to be put on a plate to be eaten.

One of the coolest parts of this for me was seeing the neat patterns that form in the pancake as it cooks. The contact point where the batter first hits the pan is almost always darkest and located in about the center of the pancake, while the rest of it has these cool squiggly designs radiating out towards the edge. 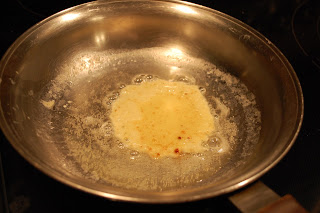 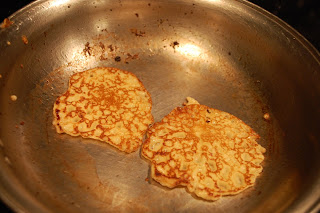 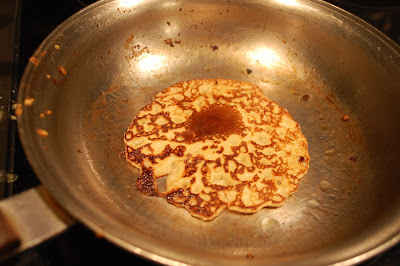 Like most other pancake recipes, these took a long time to cook. Not because it took long for the batter to cook in the pan! But because this makes a fair amount of batter, and if your pan is really only big enough to hold two small pancakes comfortably, it's going to take you a really long time to get through this. Once I started getting more comfortable and more impatient, I just started pouring the batter directly into the pan and made them about the size of a regular breakfast pancake.

Unlike some of my other adventures in frying, this was pretty painless and didn't leave a huge mess to clean up. The limited amount of oil meant there wasn't really any splatter, and the pancakes never stuck to the pan. I didn't even need to add any extra oil to make sure everything was cooking properly!

These are supposed to be eaten immediately, and the recipe explains that these are usually served rolled up with jam inside, or powdered sugar dusted over the top. Whipped cream and other fruity fillings are popular, and this would definitely be a good vessel for chocolatey fillings like Nutella for the modern cook.

I didn't have any whipped cream on hand, so my pancakes got filled and dressed with lingonberry jam and a little powdered sugar... which promptly melted while I was trying to take pictures. 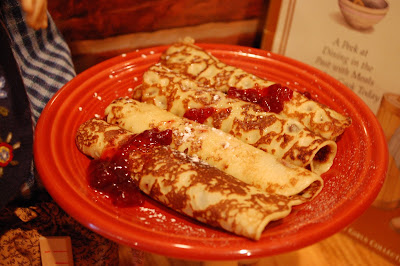 As it turns out, lingonberries are some of the most common and traditional fillings, so that was a happy accident to still have some jam in the fridge. I actually don't know if Kirsten would still have had access to these when she came to America, but I'm leaning towards no, as commercial cultivation apparently didn't really take place until the 1960's. Still, it was fun to have a mostly authentic taste of her homeland, even if it was something she likely never would have eaten again after coming to the United States.

Wow. This post suddenly got a little sad. At least there are other fun berries to eat in the US? Having no real idea of what to expect from these when I started cooking, I was pleasantly surprised to discover that they're really not eggy at all, and while they're a little greasy from the oil and melted butter, they don't feel heavy. The lingonberry jam was nice and tart, which was a good contrast to the powdered sugar on top, but the pancake itself didn't really have much flavor beyond the butter - just a hint of cinnamon every now and again. If you don't have lingonberry jam on hand, I would think raspberries would make a decent substitute because they're also pretty tangy.

One thing I'll repeat just to be totally clear is that these really need to be eaten quickly after making them. They can sit around for a bit, but they taste best when they're hot and they don't reheat especially well. Make sure you have a decent sized crowd to feed when you make them, or make peace with the fact that you're not going to be able to eat them all by yourself and might have to throw the rest out. The batter might be able to be stored for a day or two in the fridge if you really, really want them, but are going to be flying solo.

(But don't take my word on that, I didn't try to save any of my batter, so I can't confirm it keeps well overnight.)

While I generally don't love recipes that require a lot of prep time and taste best when eaten immediately because they're both time consuming and difficult to enjoy with everyone else if you're the cook who's then stuck cleaning up the mess instead of noshing on delicious food, I did like these a lot. The batter was easy to make, they were very painless to fry in the pan, and the end result was very yummy! I don't think I'd want to eat these every day, and one or two filled pancakes was enough for me, but I'd definitely make them again, especially if I knew I was going to have a big crowd around to enjoy them with me.

That would definitely require a lot of jam, though... 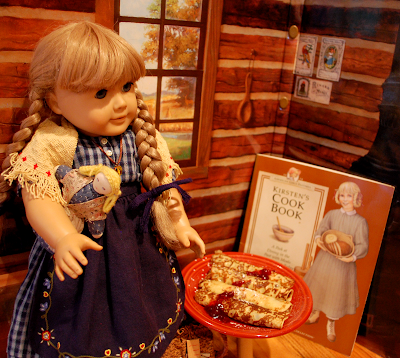 Maybe we could have a build your own Swedish pancake bar?
Posted by Gwen at 8:51 PM