A Nutting Party with Samantha 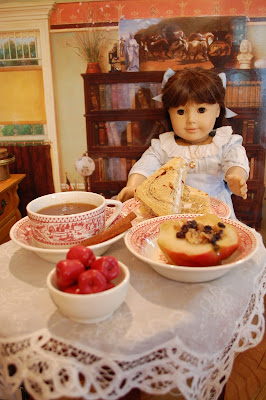 Featuring no actual nutting, but plenty of food!

When I was a kid, I used to love looking through birthday party planning books. They always seemed like they had such fun ideas for recipes, party treats and events that all followed a theme of your choosing, and while I don't think I ever followed a book's suggestions to the T, I still enjoyed browsing.

The American Girl Party Book is no exception, especially considering the photography is pretty solid and I happen to be overly invested in the topics it covers. Shocking, I know! Each character has two party theme suggestions beyond just throwing yourself or someone else a Samantha or Molly themed birthday party. Sam's suggestions were a painting party, or a nutting party, and as we headed into actual fall, I decided I wanted to try my hand at some of the recipes that went along with this theme. I've often wondered if the shorter recipes are any easier to make than the fully written out, largely from scratch recipes, and decided now was as good a time as any to give it a shot. 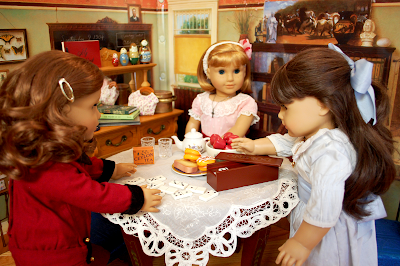 Nutting parties were popular in the late 1800 and early 1900's, and have since faded away into obscurity. They're certainly not a theme I'd ever heard someone suggest before reading this book! There were two ways to throw a nutting party: host one outside and actually go hunting for nuts, or have one inside with a nut theme. This means setting up the house with nut and fall themed decorations, and the book recommends sending out squirrel shaped invitations, creating walnut shell boats and boxes with surprises inside. You can also play games like picking up nuts with tongs to win prizes and tie fortunes to your walnut boats. Sounds like a pretty decent time, right? Maybe?

Since I didn't have any nuts to go pick outside, and the party book does seem more like an indoor affair, mine was going to have more in common with the second, even though I'm not doing any of the crafts that went along with the party idea.

So, what does one eat at a nutting party? 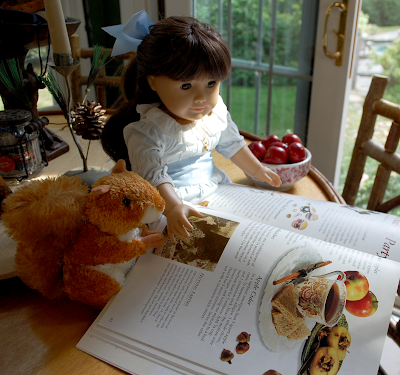 According to the book, mostly tasty fall things!

In the party book, recipes range from fully written out and explained like a traditional recipe to excruciatingly simple. Samantha's Victoria sponge cakes for example are literally described as taking a premade sponge, yellow or white cake (or cake mix), slicing it up and gluing pieces together with jam. Not exactly the authentic Victoria sponge I'm looking for!

But the recipes for the nutting party are a little more advanced than that, and give an impression of being a good middle ground between from scratch and too simple for those who enjoy cooking. They're all very straight forward, with limited ingredients and while some definitely might require some adult supervision for a younger cook, I don't think any of the three featured would be too complicated to make on a larger scale if you're a parent considering throwing a Victorian nutting party. That said, by "a larger scale" I mean "maybe six kids total", because one of the recipes can't really be made too far in advance and might be a little labor intensive to crank out for a group of say, twenty. Maybe if you're one of the upstairs people on Downton Abbey you'd be happy to serve it to a huge crowd because you're not the one doing the prep work!

The first recipe I tried is a nut tea sandwich, which is pretty accurate. Most Victorian tea sandwiches feature butter or another spread like cream cheese with another ingredient or two for flavor spread on thin bread. This one calls for four tablespoons of finely chopped walnuts and quarter of a pound of softened cream cheese. Unlike classic Victorian tea sandwiches, I used cinnamon swirl bread with pumpkin, because yes, it is that time of year, and I do enjoy experimenting with the new pumpkin flavored everything they churn out each year. 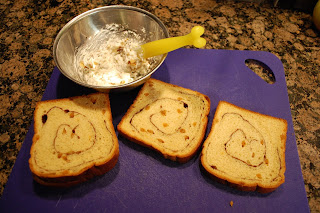 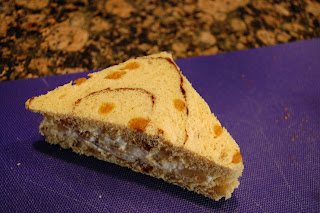 These sandwiches get their crusts cut off and should be cut into four triangles. I accidentally just did two, but pretty simple, right? Definitely a lot less labor intensive than the cucumber sandwiches I made this summer! 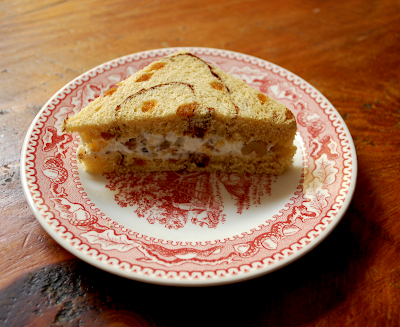 Next are nut crunch apples, which were the only part of this fake nutting party that I thought might be challenging to make for a large group. The recipe calls for four baking apples, split in half and cored so there's a decent well to hold the filling. In another bowl, you mix together four tablespoons each of currants and walnuts, then two tablespoons each of brown sugar and butter. These get stuffed into the apples, which then go stuffed side up into a pot or skillet with two cups of apple juice. The pot gets covered, and you simmer it for about fifteen minutes, or however long it takes the apples to get tender.

Since I was only making this for myself and whoever else wanted to have some, I only cut up two apples. The recipe didn't specify if the skin needed to stay on or off, but since I wasn't using baking apples, I decided to leave mine on in the hopes it would help them hold their shape. I also cooked them in apple cider instead of apple juice, because that's what I had in the house. 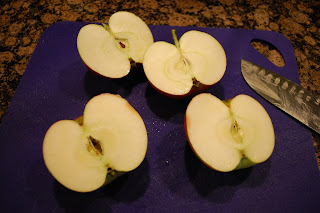 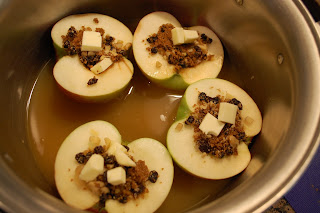 I'd imagine these are best consumed warm, which is why I mentioned I'm not sure how easy it would be to get these out to people in a timely fashion. They took about fifteen minutes to cook, and my pan only would have fit four or five comfortably, so serving them hot might require cooking and then microwaving.

I did like them, though. Mine didn't cook all the way through the way I'd have liked them to, which made them a little hard to eat, but the combination of flavors is tasty and it doesn't feel super unhealthy even with the butter and brown sugar, both of which melted really nicely and helped the nuts and currants stay in place! 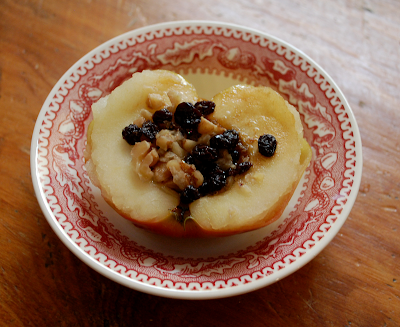 Spiced, hot apple cider is one of my favorite things to enjoy in the fall, so I was interested to see what the American Girl version was like.

one quart of apple cider, a half teaspoon of allspice, three whole cloves, and one cinnamon stick. This gets heated over medium heat for five minutes, and then a quarter cup of brown sugar gets added before you bring it to a boil. I turned the heat down at this point, watched it like a hawk and let it cook for another five minutes. 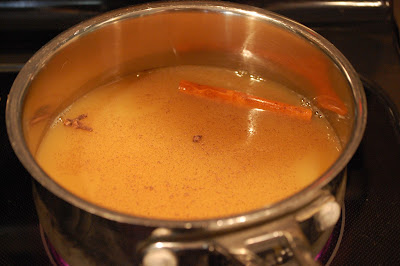 I was a little wary of putting in that much sugar into already sweetened apple cider, but I have to admit, we bought off brand apple cider and it is not as good as the stuff we usually get. The brown sugar and spices kind of helped this taste a little more interesting and less... odd. But honestly, if you like your local brand of apple cider? Just go with the spices and heat it up, you don't need the sugar. The recipe also recommends using a cinnamon stick as a stirrer, which I thought was cute. 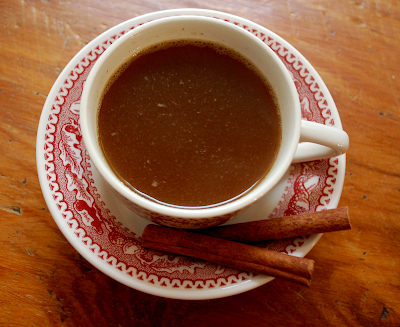 All together, it makes a pretty decent spread for a small party. You might want to add something a little more substantial, or at least nut free for people who can't have them - the bistro at American Girl Place serves a really cool mock peanut butter sandwich for kids who can't eat actual peanuts! - but overall, I think this was a pretty decent first try for a person who's never followed through on actually making party food before.

Luckily, we had some nut themed china to serve everything on. 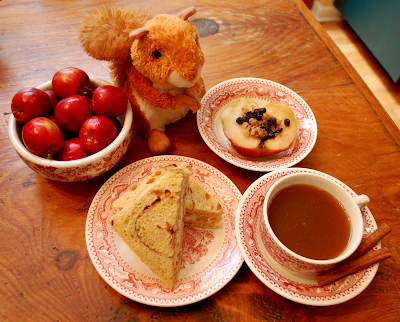 Now we just need to set the table... 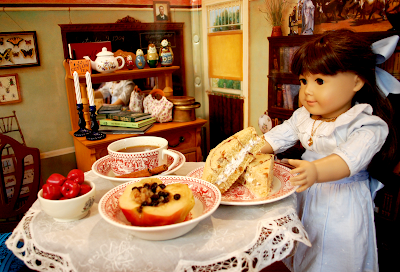 And wait for the guests to arrive! 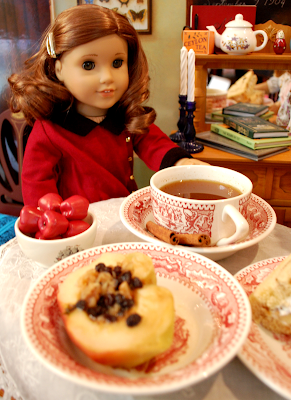 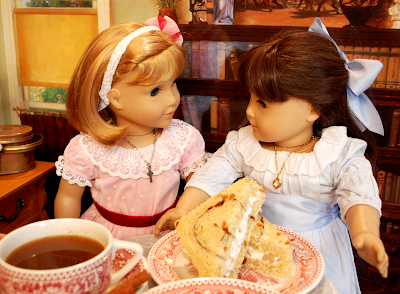 While I didn't go all out and have a truly traditional nutting party, it was a lot of fun to test out the recipes and see if they're something I could see making for a party, rather than just a random weekend. I've always wondered if books really give you realistic ideas for how out of control a kid's birthday party can be - everything always looks so easy when it's in print! - and while I'm certain other things might be a lot more challenging, these recipes were pretty quick and easy to make, and are certainly modern kid friendly enough to be welcome on most tables. I'm still not sure how I feel about some of the traditional party games at a nutting party, but I'd be happy with this menu any day. 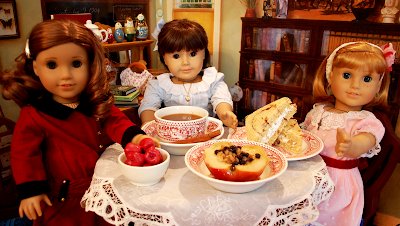 Maybe someday, I'll get brave and decide to try out some of the crafts, too! 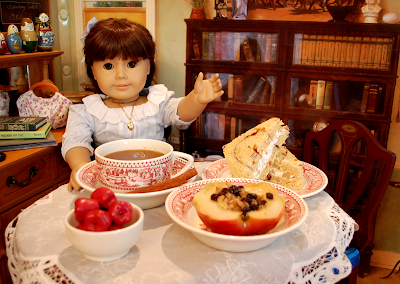 Until then, I'm always happy to stick to the food!
Posted by Gwen at 7:18 PM