A really interesting spin on your favorite Thanksgiving dessert!

November is here, which means Christmas commercials, the sun going down before I leave work, and Thanksgiving, the latter of which is probably the only thing I genuinely enjoy about November.

Well, that and the fact that people still consider it to be pumpkin season, and as I've mentioned, I happen to be a fan of pumpkin. There's a part of me that almost wishes it was available as a flavor for things like ice cream and cupcakes year round - don't even get me started on the pumpkin pancake mix my mom usually breaks out at Christmas time! - but I have to admit, it's also kind of nice to have it as something to look forward to in the fall. It keeps it a little special!

So, needless to say, I was excited to discover that the recipe included with A Reward for Josefina featured pumpkin as one of the main ingredients. I know the last time I tried an American Girl recipe starring pumpkin was kind of a disaster, but I went into it with a fair amount of cautious optimism, and I think I'm pretty confident in saying it worked out way better than I thought it would! Back in 1999, American Girl decided to do something a little different and give each of their historical characters a new outfit associated with a short story that was either wholly original, or had been previously published exclusively in American Girl Magazine.  Each story came as a small, hardbound book and included instructions for an extra craft or activity in the back. This continued with the next several short story releases, and unfortunately, most of these aren't recipes - although I only own the first three sets, so maybe there are more in the newer releases? - and some of them are pretty hilariously not necessary to post to this blog. One of Addy's encourages you to use store bought sugar cookie dough to make into letter shaped cookies, and one of Molly's tells you how to pop your own popcorn. Not exactly rocket science or especially historically interesting!

A Reward for Josefina includes this recipe for a pretty easy to make pastel. What's a pastel, you may ask? It's basically just a pastry, and this one is really just a slightly more involved pumpkin pie. I was a little disappointed to discover there wasn't much historical background about this recipe given, and I couldn't find anything while poking around the internet, but basically, it's included in the book because the main plot involves Josefina and her family harvesting piñon - pine - nuts during the fall. These were a very valuable product for trading and were (and still are!) considered a very tasty treat, made all the more special because a really good crop only occurs every few years. Families like Josefina's traded most of their nuts for other goods and services, but they kept some to roast and eat. This recipe uses piñon nuts and raisins to add some interesting texture and flavor to this pastel.

I was definitely interested to see how it turned out, and dove right in! Unlike most pumpkin pies, this recipe called for a double crust. It needs 2 cups of flour, 1/2 teaspoon of baking powder, 1 teaspoon of salt, 2/3 of a cup of lard, and 6 to 9 tablespoons of cold water. Combine the dry ingredients, cut in the lard until it's nice and crumbly, and then add the water, gently combining it with the dry ingredients until you've got a substantial dough.

We don't often leave lard or shortening in the house, so I usually just substitute with butter. This is what I did this time, and I think the crust turned out pretty well. I will say that it took a lot more water than the recipe called for to get it all combined, thus proving once again that pie crusts are probably my least favorite things to bake. I always worry I'm overhandling it and won't be making a good, fluffy crust. 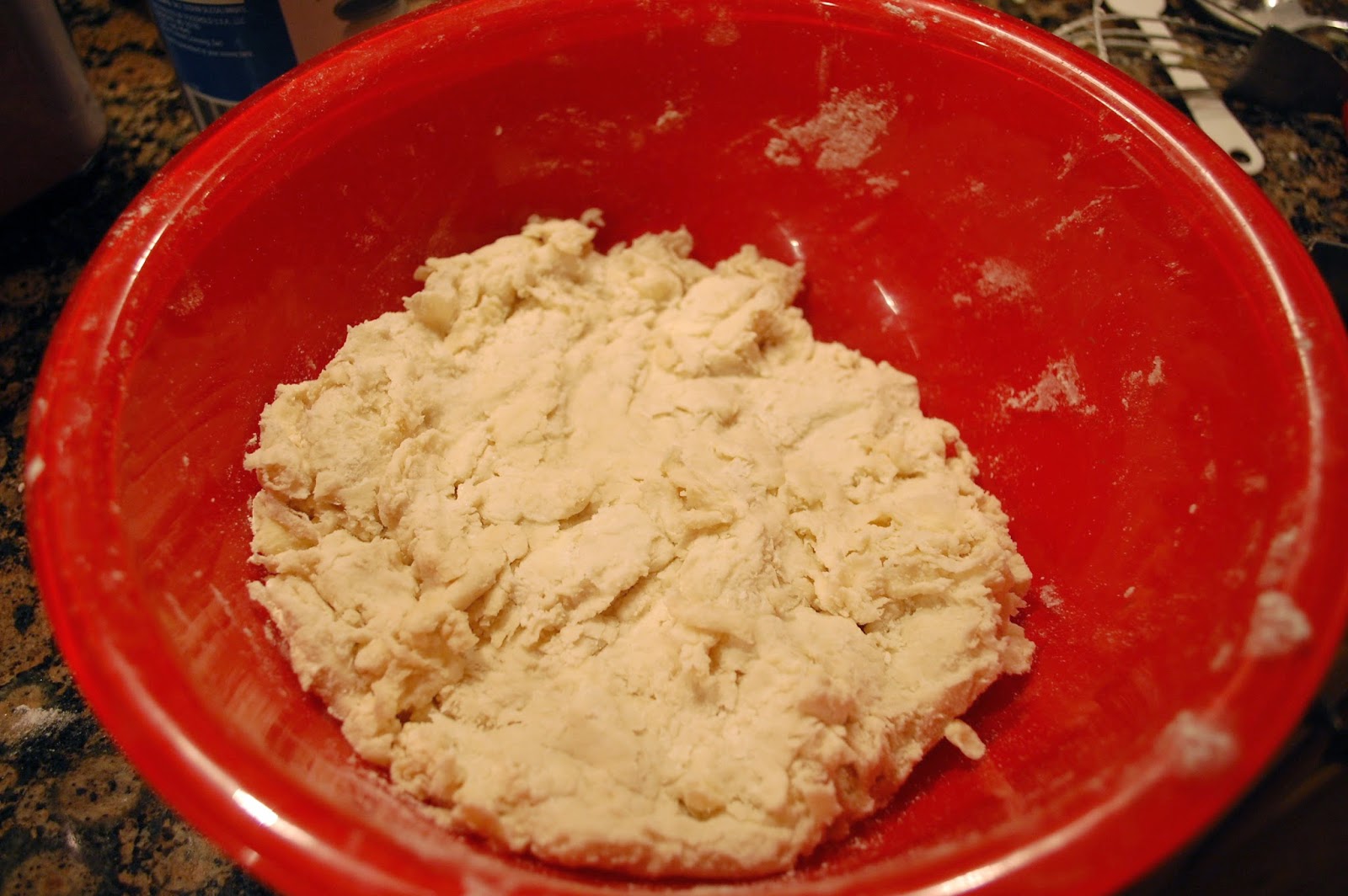 This has to chill in the fridge for at least half an hour before you do anything else with it.

My only complaint is that we seem to have a really difficult time finding a 16 ounce can of pumpkin. This isn't the first time we've had leftovers because we could only get our hands on a 15 ounce can, so I'm wondering why this isn't the standard size for canned pumpkin in general and what to do with our leftovers. (We're definitely not making pumpkin pudding again though, I'll say that much!) 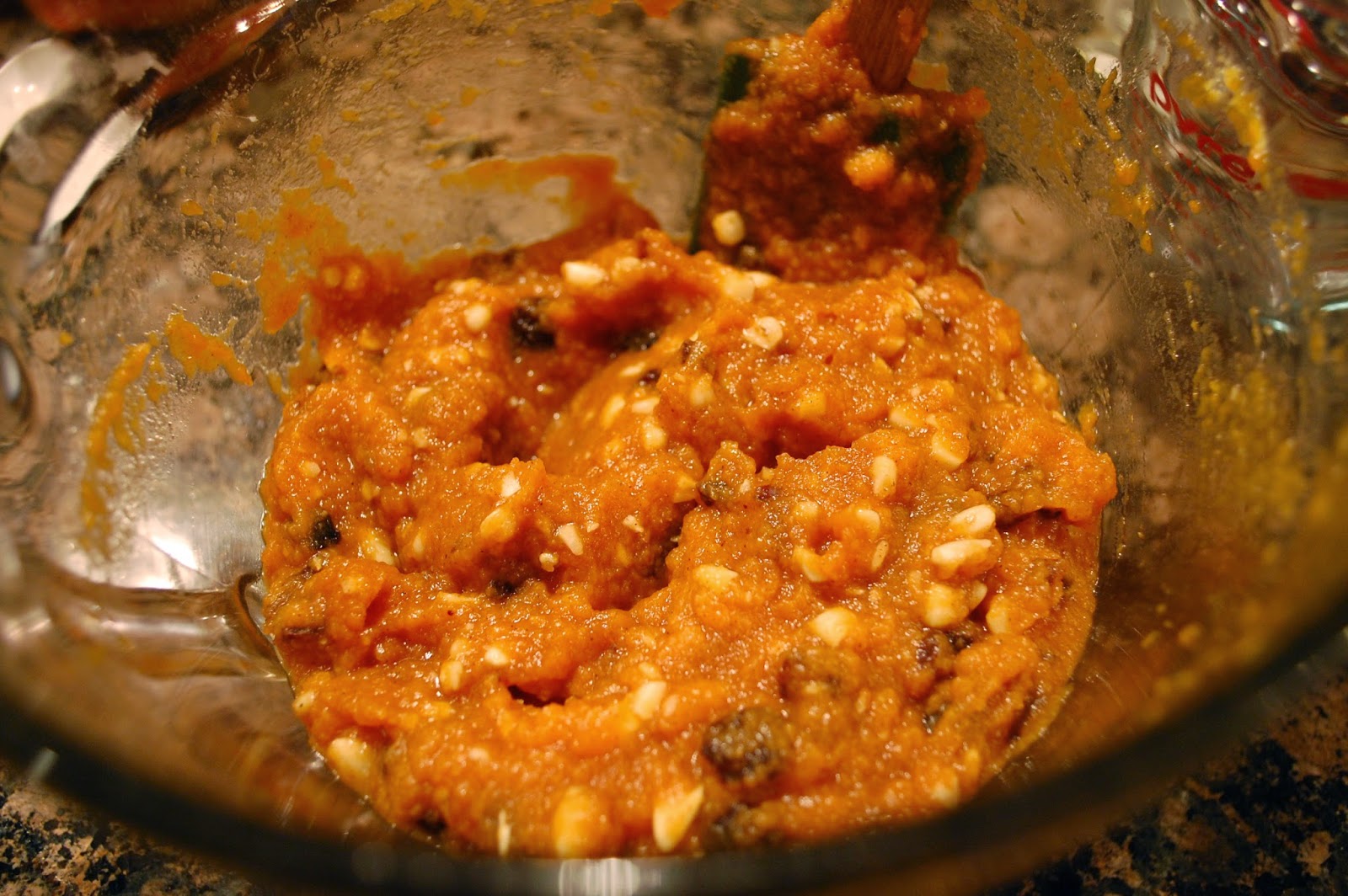 Next, divide your dough in half, roll it out, and put it in the pie pan. Dump in the filling, roll out and drape the second half of the dough over the top and seal it. The recipe definitely encourages making vents and suggests using a cookie cutter to make them pretty shapes. I did my standard little four leaf thing I seem to do on every double crusted pie I make, and thus one seemed like it came out nice and symmetrical. 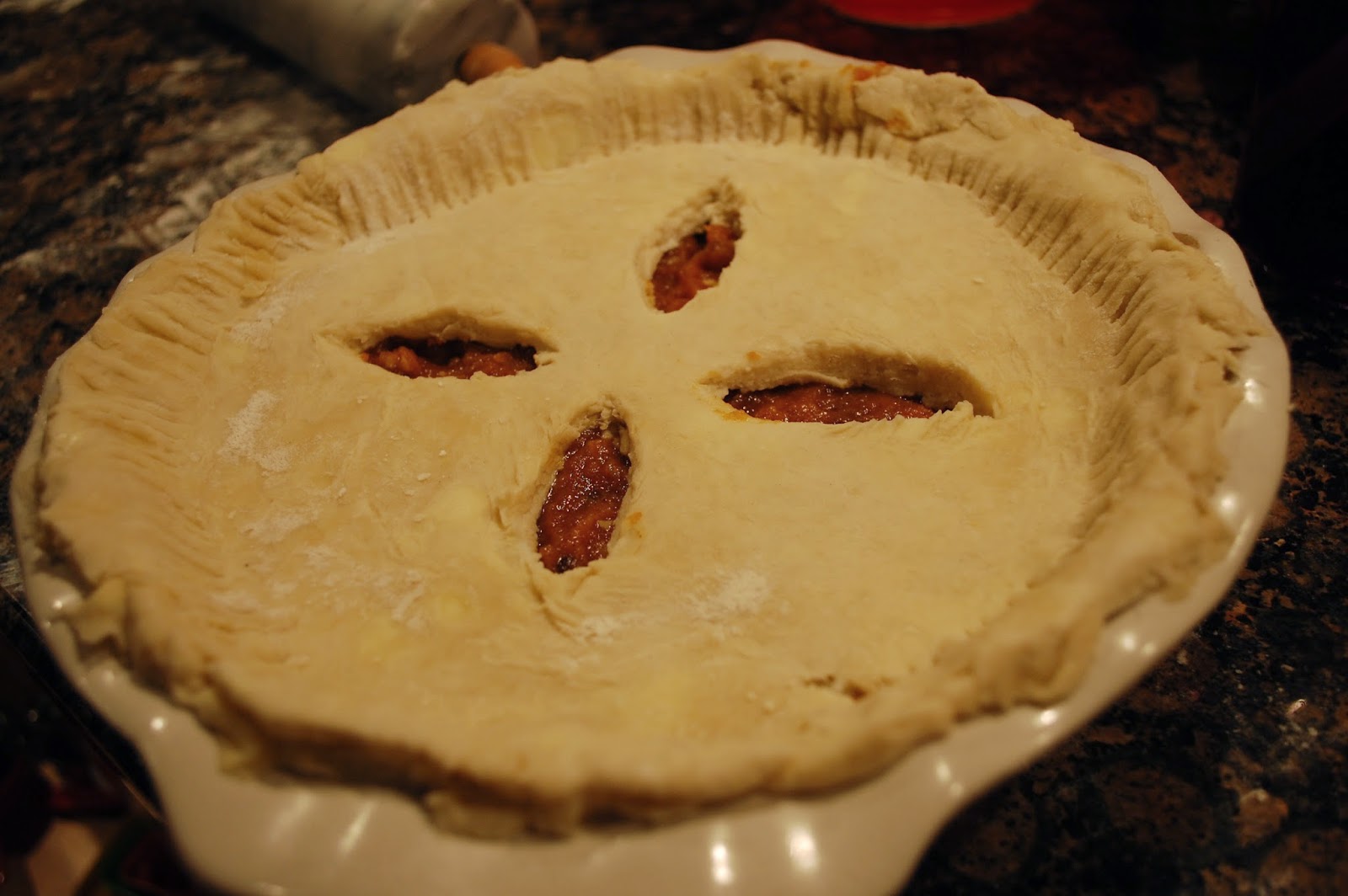 To top off the pie and give it a little extra flavor, melt 2 tablespoons of butter and brush it thoroughly over the top of the pie. Then, combine 1 tablespoon of sugar and 1/2 teaspoon of cinnamon and sprinkle it over the top. 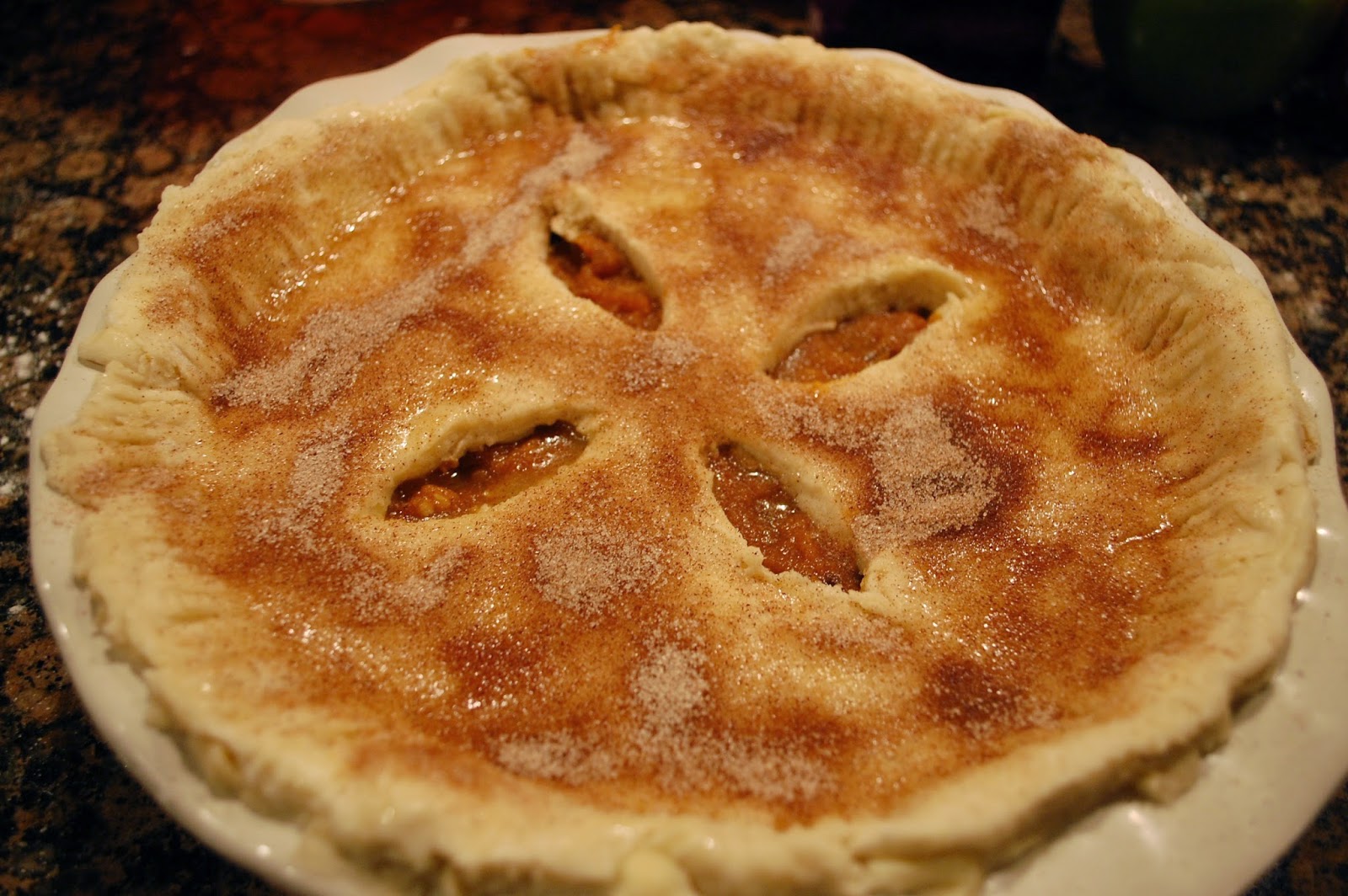 The whole pie bakes in the oven for an hour at 350 degrees, and when it comes out, looks pretty dang beautiful, if I do say so myself. 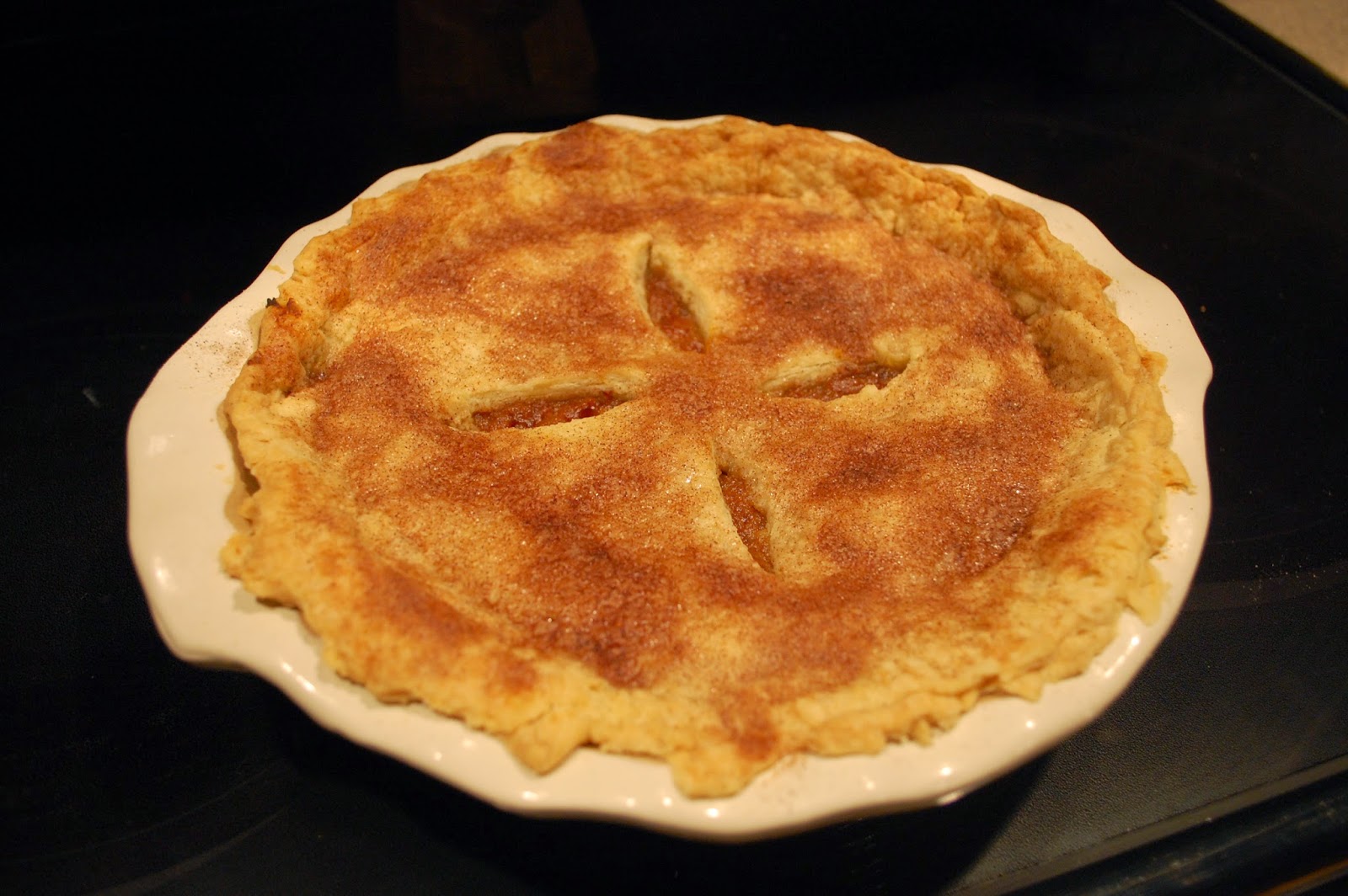 The recipe recommends letting it cool before eating it (obviously, you don't need anyone scalding their mouths), but serving it while it's still warm. I actually made mine the night before attending a gathering with my family and some family friends, and when it was heated up in the oven the next day, it wasn't soggy or burned when we took it out, so it seems like a pretty sturdy thing if you need to make it a little bit in advance of wherever you're taking it to.

Now, I like pumpkin pie. I wouldn't say it's anywhere close to my favorite dessert ever, but it's something I enjoy eating and I'm not especially fussy about needing it to be crazy or different from any standard pumpkin pie recipe. I still like traditional pumpkin pie, and I wouldn't say that this replaces it in the pantheon of amazing desserts for me, but it was definitely good! The texture made it feel a little less like a pie and more like a savory vegetable dish, but the flavor was definitely sweet without being too sweet, and the raisins and pine nuts added extra nice flavors and extures.

I'm also definitely glad I made it with a butter crust instead of shortening. Not that a shortening crust would have tasted bad! I think I just prefer butter crusts when I'm the one making the pie and the taste always seems a little better. I'm not sure why I'm such a mess at shortening crusts!

Several of my taste testers expressed that they really, really liked this, and wanted the recipe either for Thanksgiving or just to have on hand, the pie was that good. For something I had no idea what to expect about before starting the recipe, that's pretty high praise! So if you're looking for something new and different to do this Thanksgiving,  you could definitely do worse. It will probably be making another appearance at our table in a couple weeks...
Posted by Gwen at 1:40 PM