Just in case you feel like being a little more adventurous than Stove Top this year...

When it comes to Thanksgiving, I don't think I'm alone in being more into the side dishes than I am into the main meal itself. I don't have anything against turkey, don't get me wrong! But I'm more likely to try and run off with the entire bowl of mashed potatoes than I am to start a fight over what pieces of turkey I get.

Certain other family members feel the same way about stuffing, and while I'm not sure this is going to replace Stove Top for some of them, I have to admit, this authentic Civil War era recipe for turkey stuffing was pretty tops, if I do say so myself. It won my heart for being easy to make, tasty, and flexible enough to go with just about any entree if you make it on a random day to accompany whatever else is being made for dinner.

What can I say? Thanksgiving is still a couple days away, we're not making two turkeys this week! So as it turns out, although Thanksgiving has been celebrated on a national level pretty consistently since 1863 (thanks, Mr. Lincoln and Sarah Josepha Hale!), recipes don't seem to have changed much. It's a little harder than you might expect to find full menus for Civil War era celebrations of this relatively new-to-them holiday, and a lot of them aren't from households like Addy's. If you're looking to recreate a more fancy, formal Thanksgiving enjoyed by wealthy Northerners during the war, you've definitely got options and guides out there, including a recipe for Civil War macaroni and cheese! (Remember, mac and cheese has been a part of American cuisine since Thomas Jefferson was President!)

As it turns out, the Thanksgiving dinners Addy and her family and friends might have enjoyed aren't all that different from the ones we have today. Sure, they don't have green bean casseroles - although Julie and Ivy would! - but they had turkey, pie, a lot of vegetables, and stuffing. Can't forget about stuffing.

Stuffing is absolutely a staple of meals like this, no matter how wealthy or poor you are, or what part of the country you come from. It's easy to make, and can be thrown together with ingredients like spare fat and stale bread that otherwise might not be all that appealing to throw on the table. My recipe comes from a 1857 recipe republished on a historical blog I'd definitely recommend you taking a peek at. She's got lots of great information, guides and discussions about reproductions, reenactments and history in general!

Like most bread stuffing, you need to start with... bread. You need about half a pound, roughly the equivalent of half a loaf of normal sized bread. Ree Drummond from Food Network recommends chopping your bread the night before you're going to make the stuffing and leaving it out overnight with a towel over it so it gets a little crunchy and stale by the time you're ready to actually make the stuffing. I think I could have chopped my bread into finer pieces, but got a little frustrated after I cut my hand and then just started tearing chunks off.

(Don't worry, I cleaned myself and the knife off and bandaged up before handling anything else, and no bodily fluids got on the bread!)

Once you have your bread chunks, stick them in the oven at 350 degrees for about five minutes, or until they're toasty. Mine took a little longer, because my oven is finicky and is apparently out to get us. 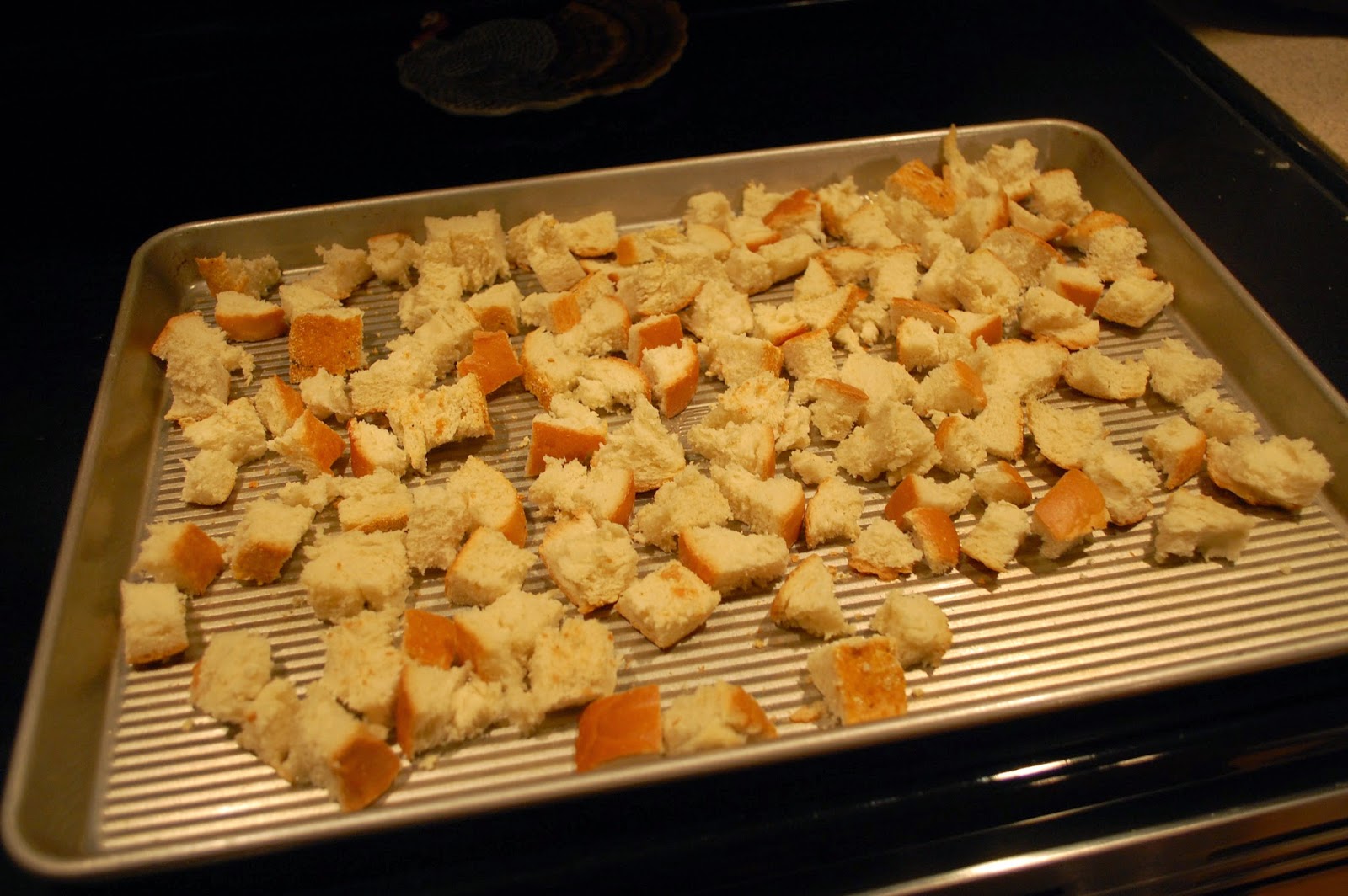 Once they cool off, they get dumped in a mixing bowl with the rest of your ingredients. This recipe calls for ½ lb. suet, chopped small 1 tablespoon parsley, ½ teaspoon thyme, ½ teaspoon marjoram, 1 pinch of nutmeg, 1 teaspoon lemon peel, grated salt and pepper to taste, 2 eggs, and 1 small onion. My onion goggles seem to have gone on the lam, so I was in excruciating pain while wrestling with my onion, and I might have chopped way too much parsley because I'm bad at eyeballing tablespoons while chopping fresh ingredients, but my mom assures me that you can never have too much parsley. As someone who used to just eat it by itself just out of the garden, I definitely agree with her.

Our biggest problem ingredients wise was finding suet. Our local butcher said they only get a little bit of it in every day, and someone had already bought today's supply when we got there, which meant we needed to find a substitute. We ended up using vegetable shortening, which works pretty much the same way, you're just going to be missing out on a little bit of the flavor.

Honestly, I definitely didn't think this was flavorless. The parsley and the lemon really brought this to life in a very nice way, so I don't know if this is just me saying it's tasty and flavorful without having tasted the suet in it, or if my opinion will change if I ever get my hands on the real thing. I guess we'll see if we find some next time we try it! 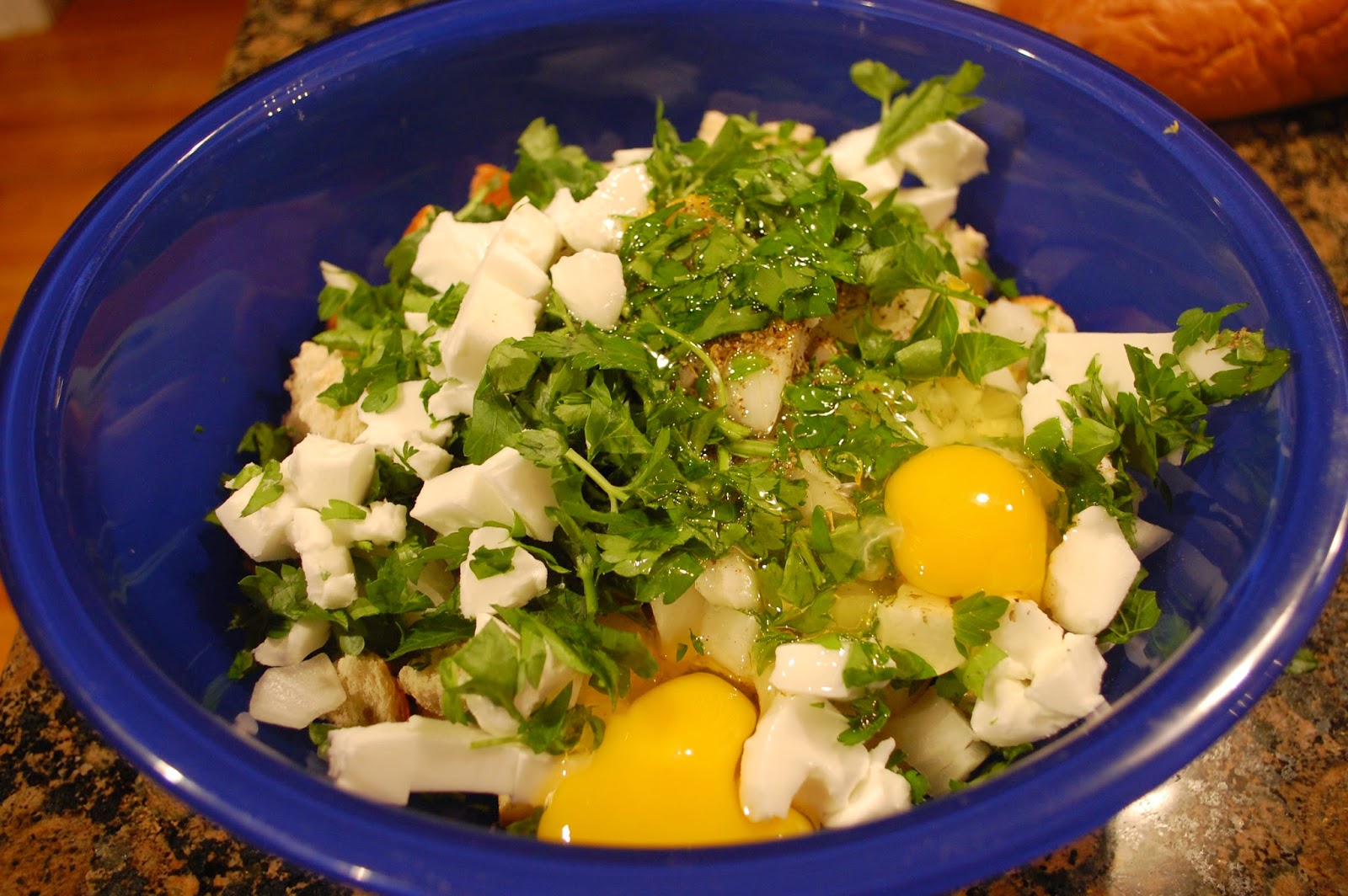 In theory, this is when you cram it into your turkey and let your stove work its magic, but like I said, I didn't have a turkey to do this to.

So, what do you do if you don't have a dead bird to shove this inside?

You stick it on the stove in a saucepan and saute it over low heat for five minutes, and then add a cup of boiling water, turning the heat up to medium/high heat, stirring occasionally until the water boils. Take it off the heat once the water boils, fluff it with a fork, and then put the lid on the pot and leave it alone for about five minutes. 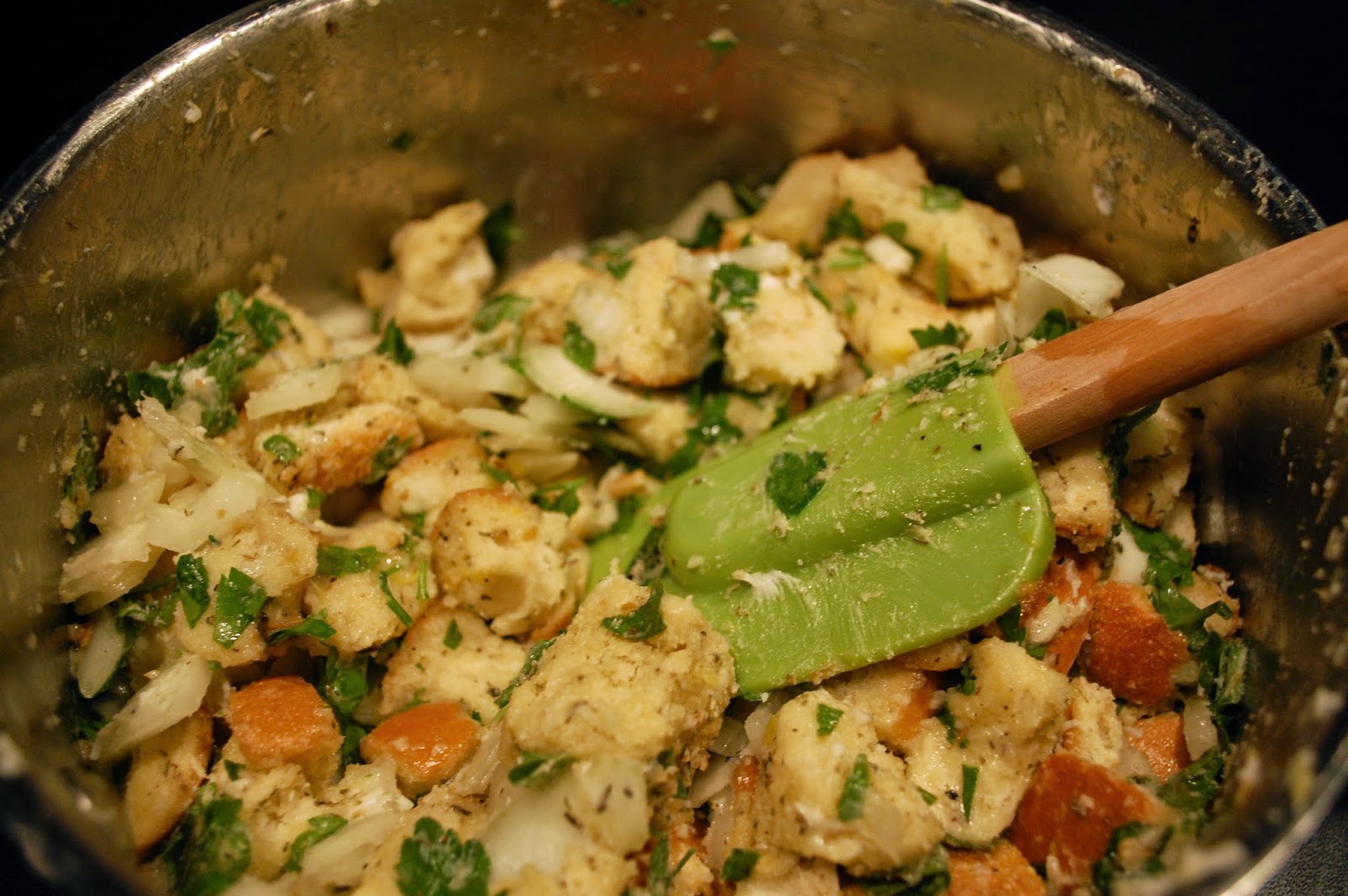 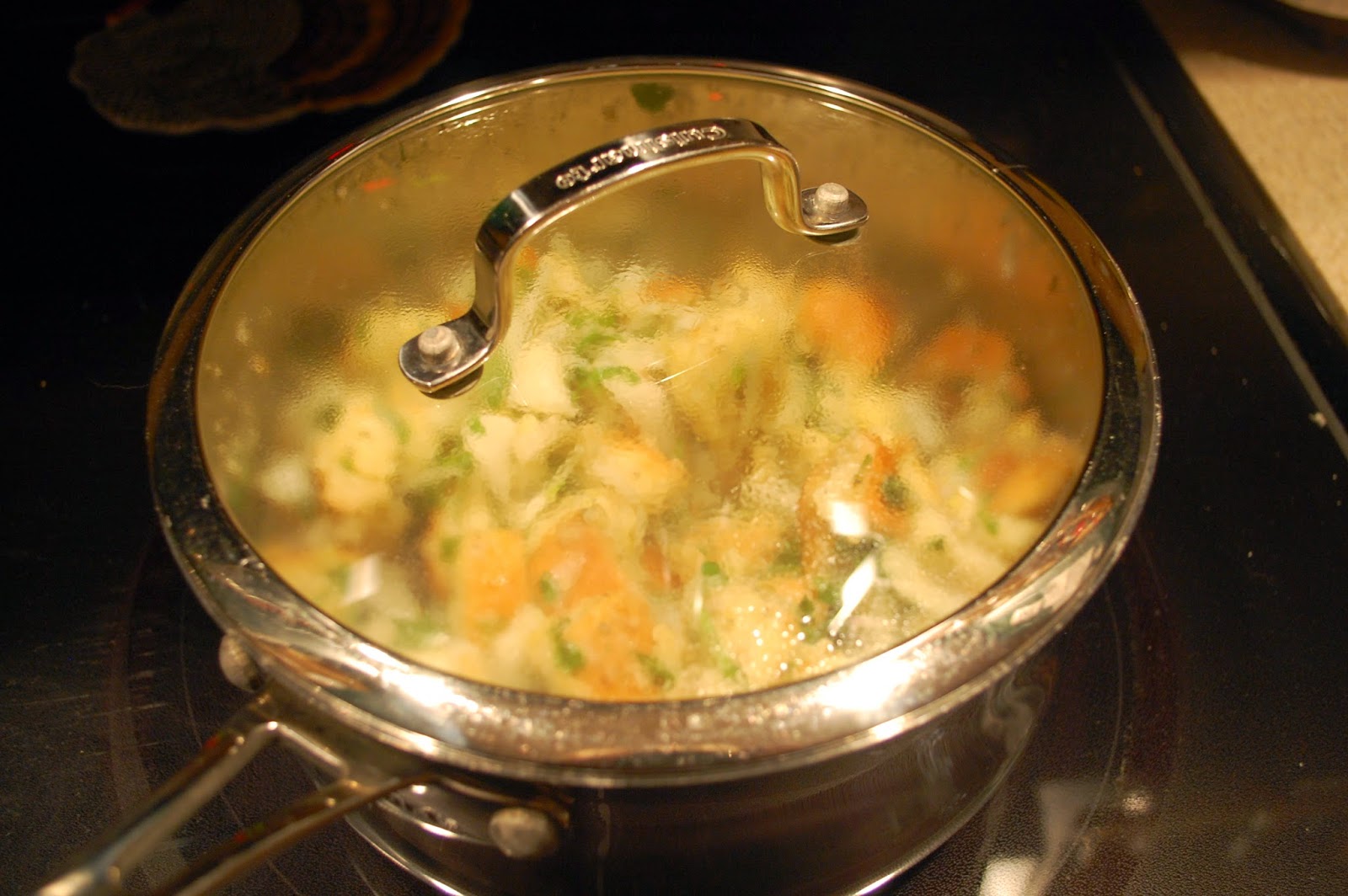 And voila! You've got delicious stuffing you can enjoy regardless of whether or not you're cooking an entire turkey. 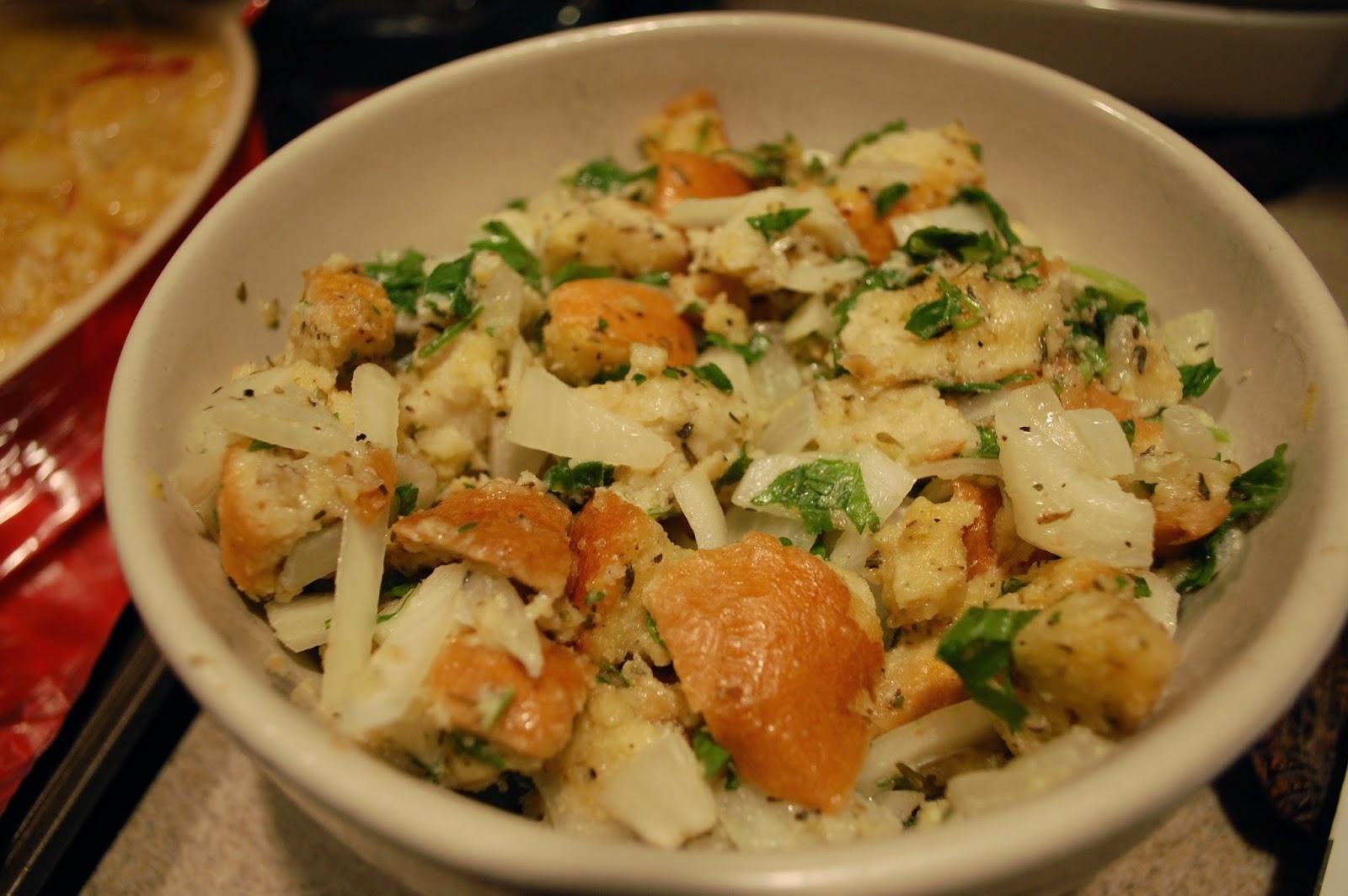 Sometimes, it's a bit of a hard sell to get people excited about eating historical food. I'm not sure why, because after running this blog for over a year, I've discovered most of the authentic historical recipes - yes, even the Depression era ones - have been pretty good. This in particular tastes just like a tasty stuffing we'd enjoy today, and if I didn't tell you it was from an 1857 recipe, I bet you wouldn't be able to tell.

Overall, it was pretty easy and relatively painless to make, and I can definitely see myself making it again sometime. Who knows, maybe it'll show up on our table again sooner than I think? Like maybe this Thursday!
Posted by Gwen at 5:28 PM