It turns out Civil War army rations aren't as horrible as you might think!

I closed my post last night with words from Lincoln's Gettysburg Address, which is hands down one of my all time favorite speeches and I might get choked up every time I read it, let alone if I'm trying to recite it or listening to someone else do it. That's kind of been on the brain for me lately not only because I think its words are still incredibly relevant today, but also because last weekend, my town hosted a Civil War reenactment! I love Civil War reenactments. Living history is something I've always really enjoyed, and part of me would love to be able to do it for a career. The other part of me wonders if I'd do a good job staying in character - I feel like I'd be pretty self conscious!

So while I didn't participate, I did attend, and of course I got to thinking about what kind of food I could make to bring the event home. One of my favorite food blogs - The History Kitchen - had something that totally fit the bill: an authentic stew recipe that would have been cooked by Union soldiers in the field!

I know what you're thinking - Gwen, that sounds horrifying! But I promise it's not. With the benefit of fresh ingredients and a distinct lack of typhoid fever in the area, it's actually quite tasty, if a bit time consuming to make. Put a little faith in me and read on to find out more about it. 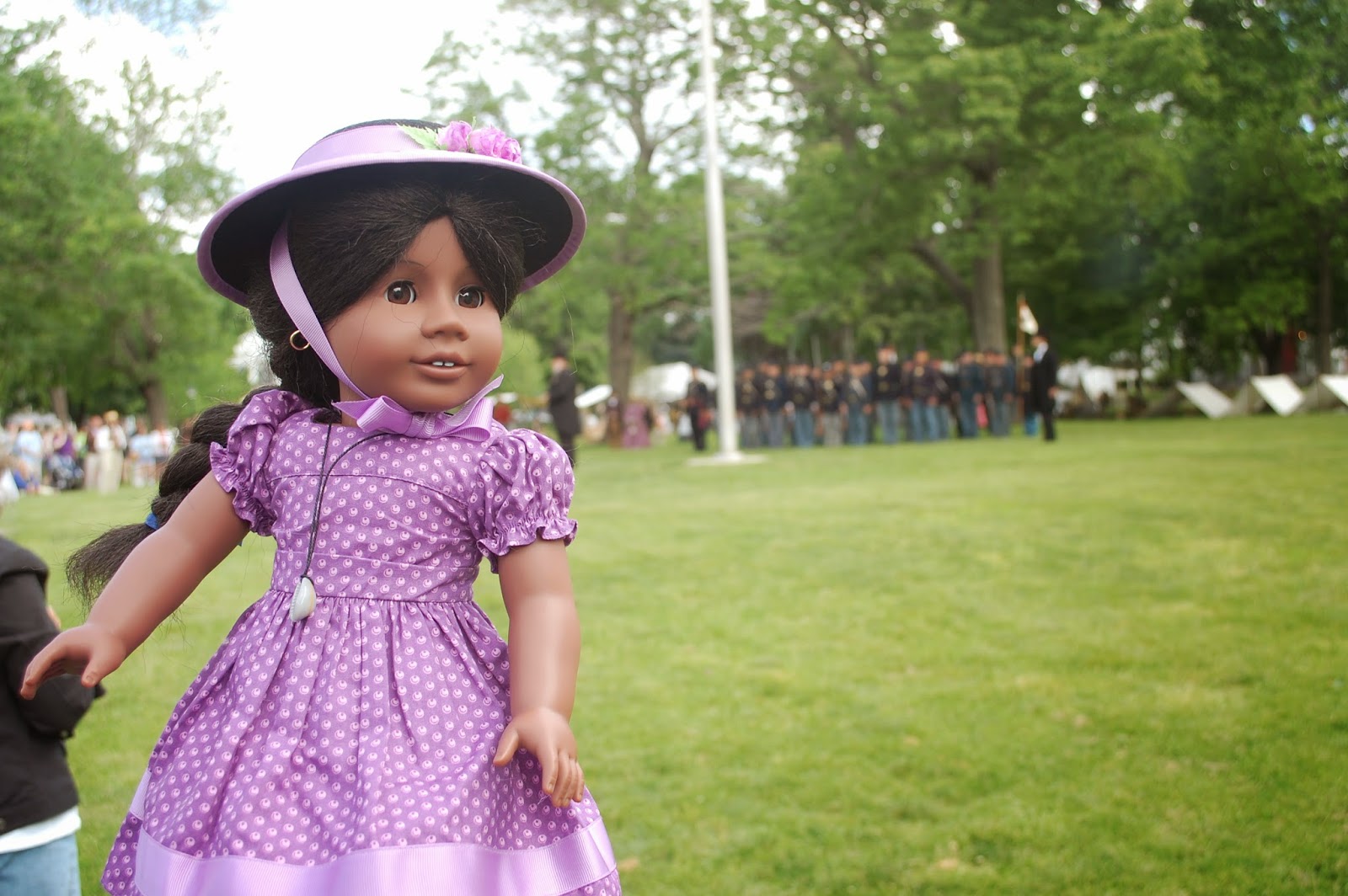 I love my hometown, but sometimes I do totally get why some people feel like there isn't much to do here because, well, there isn't. This was the first event hosted here of this kind that I've been aware of, and while I'm sure most bored local youths didn't care, I was kind of over the moon about it!

Although my academic interests have shifted and latched onto World War II pretty hard, the Civil War is one of the many other topics I really enjoy exploring and learning more about. While a lot of that has to do with it being a genuinely fascinating period of American history, it's also the earliest event I can directly trace my ancestry to. My great-great-great grandfather enlisted in the 9th Massachusetts and fought at Fredericksburg, where he was injured and may have lost his leg while attempting to get up Marye's Heights, a hill that was heavily guarded by the Confederate army. Unfortunately, that's about all we know about him, although I was able to track down his grave with the help of ancestry.com! Hopefully I'll get to head out there to see it, sometime. 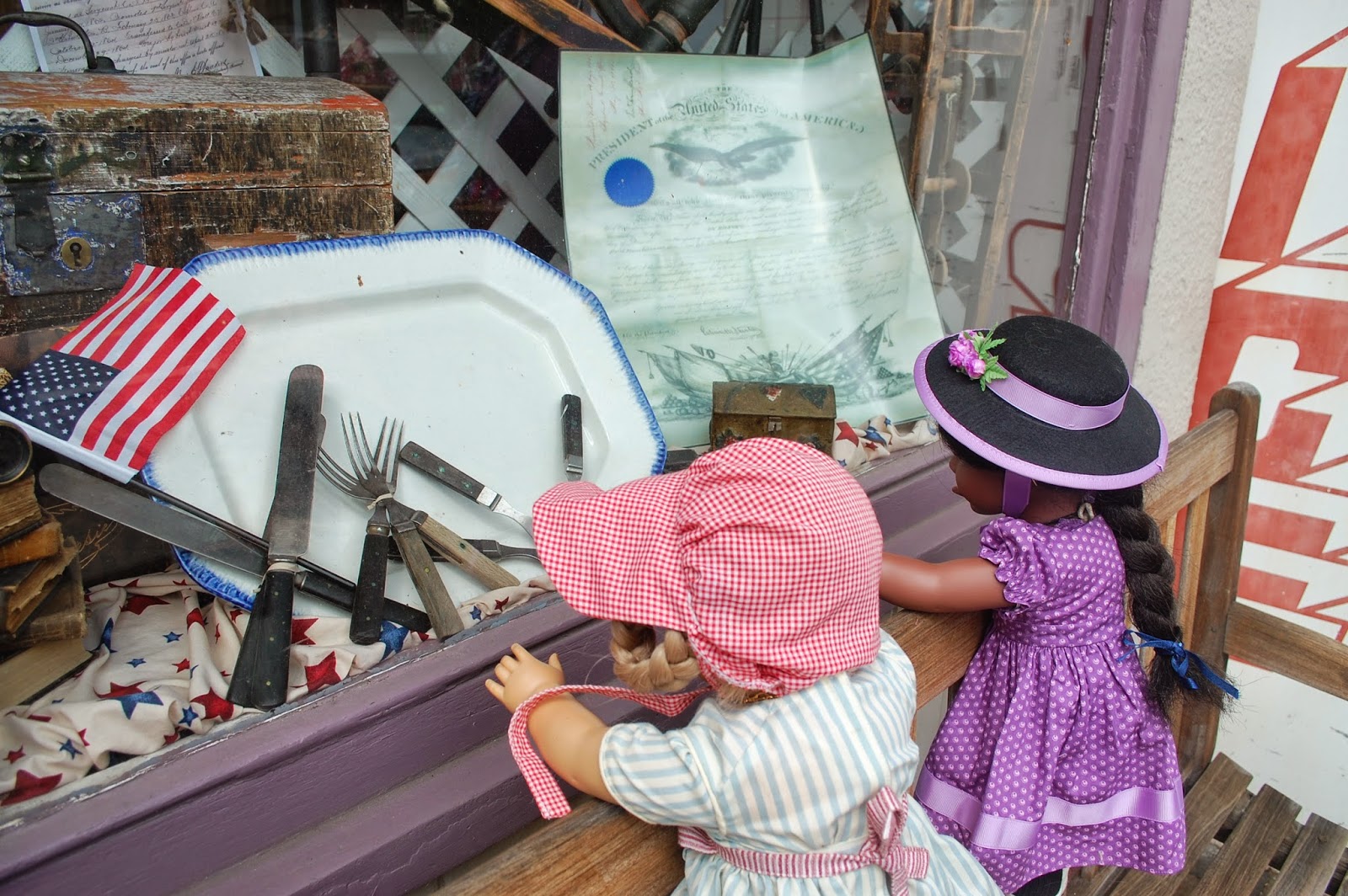 Kirsten came with us too, but didn't end up in too many pictures because of a freak rainstorm.

At the beginning of the Civil War, my hometown had a population of about 2,000 people, and about one fourth of them enlisted or were drafted into the military. Those left at home helped by volunteering at military hospitals, raising money and gathering supplies for troops in the field, and some even ventured south to help advance educational programs for newly freed slaves. Others continued to champion the cause of abolition, even if certain preachers let their desire for peace in the union cloud their sight to the greater evils at play in the south. About fifty men and boys were killed - some in combat, most from disease, a few from stupid accidents and at least one as a prisoner of war. They're all commemorated on a memorial at the center of the town green with the exception of a few, which was apparently an oversight by the designer.

The coolest part of the entire day was that the war memorial had an exhibit arranged around it with information about each of the men listed there. I've often looked at those names and wondered how old they were, what they were like and where they died beyond Antietam or Gettysburg, and this featured diary excerpts, last words and letters home to their families. I also learned there are four Black soldiers listed on the monument, although a typo says one of them served with the 54th Massachusetts, when in reality he served with the 55th. As a fan of Glory, I was slightly disappointed to hear that was a mistake.

My expectations for the event itself were a little reserved - our green isn't really big enough to host a battle, but one regiment representing the 14th Connecticut (also known as the Fighting Fourteenth) set up camp, gave firing demonstrations and even hosted an authentic 1860's baseball game. There was a talk by an author who'd written a book about one of our hometown soldiers, and even Abraham Lincoln was there! The night closed with a concert featuring Civil War era music and dancing, and overall, I think everyone had a good time! 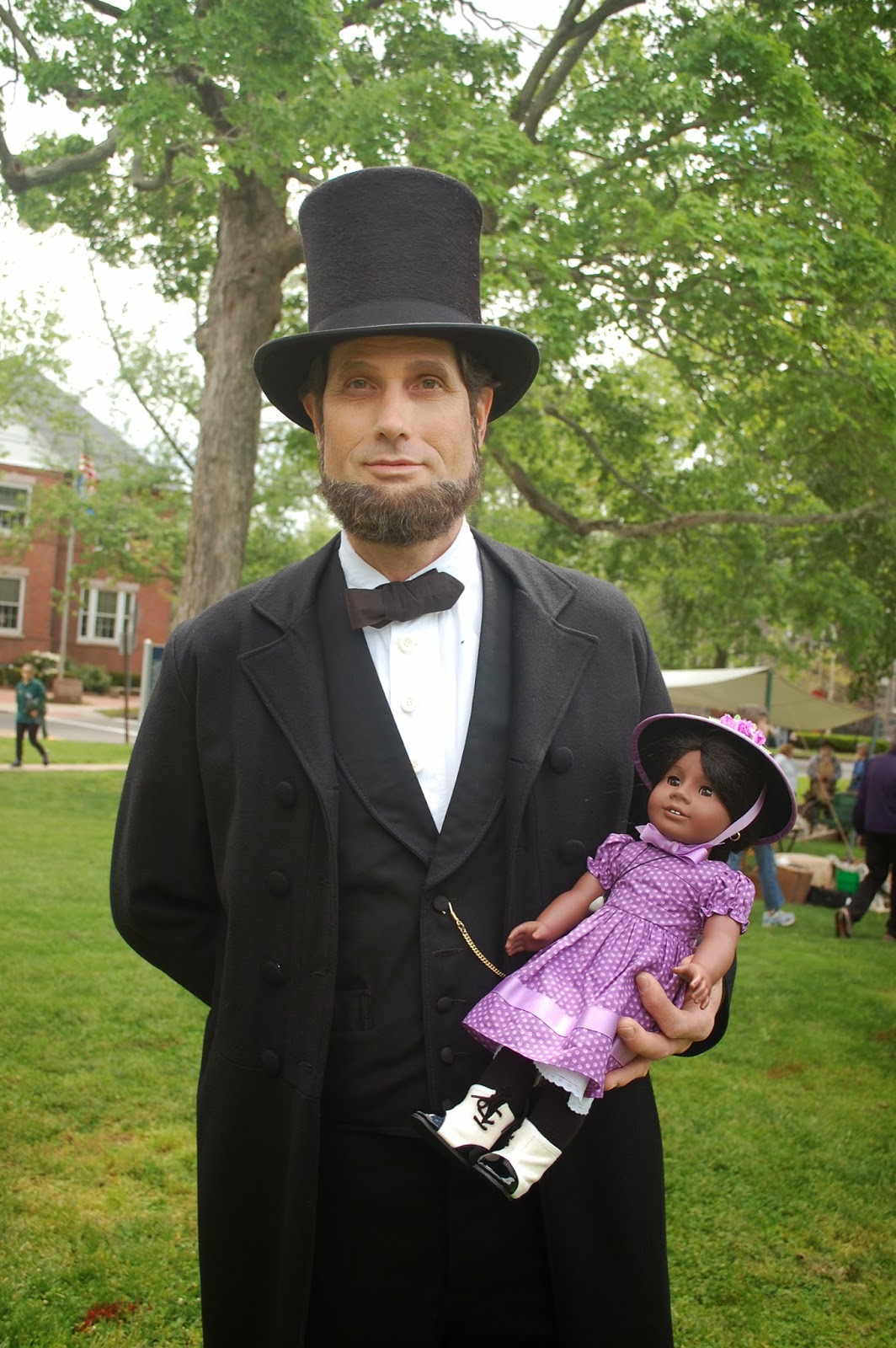 Lincoln was even kind enough to take a picture with Addy!

The recipe I used is again, from The History Kitchen and can be found here! There's a lot of great information about feeding Civil War soldiers preceding the recipe, and I really recommend giving it a read. This recipe was adapted for a modern audience by the author for from an authentic 1860's recipe designed specifically for Union Army cooks, and is a pretty simple stew to make if you're willing to devote some time to making it.

You start by browning your meat (which should be seasoned with salt and pepper) in a pan, and then putting it in twelve cups of water before it's really fully cooked. You let this cook until it boils, and then skim the fat off the top to discard. Skimming the fat was kind of a pain, mostly because I wasn't actually fully certain of what I was doing at first and might have taken a little bit of broth out with it at first. I'd imagine this is the only part that would really be a pain to do while cooking it over an open fire. 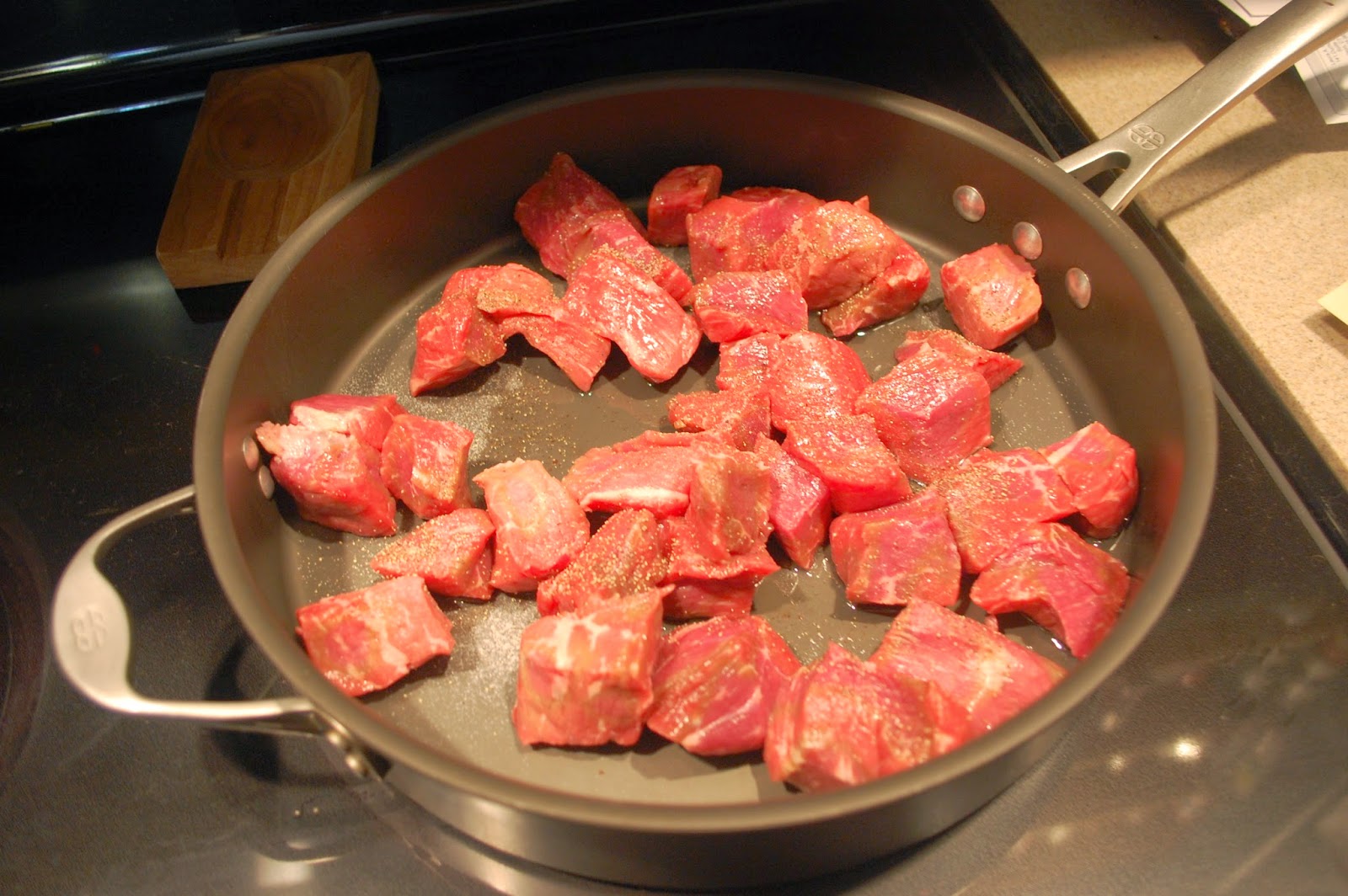 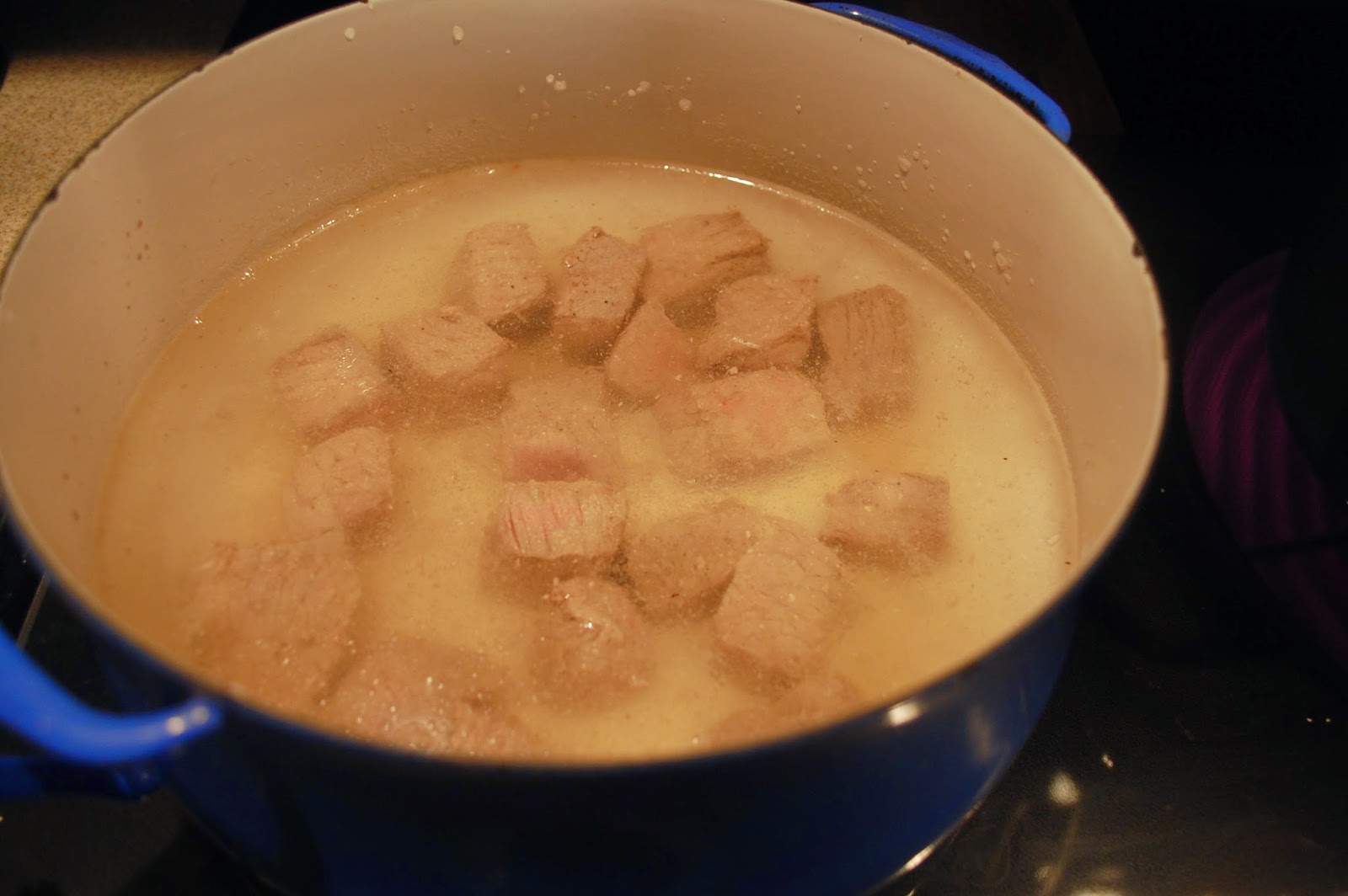 Once it's boiling, you toss in the vegetables. This recipe was the first time I've ever had to cut up a leek on my own, and man, it was kind of a pain! They're a lot bigger than I thought they were, and cleaning them is kind of a production, but they're tasty so I guess it's worth it.

The biggest problem was that the vegetables, liquid and meat definitely were not all fitting into one soup pot, so I had to cook them in two. I did my best to keep the portions equal between the pans, and I think it worked out okay, but it was still a little frustrating.

Once you've got everything in the pan, you add some flour mixed with cold water to act as a thickening agent, and mix everything together with salt and pepper. 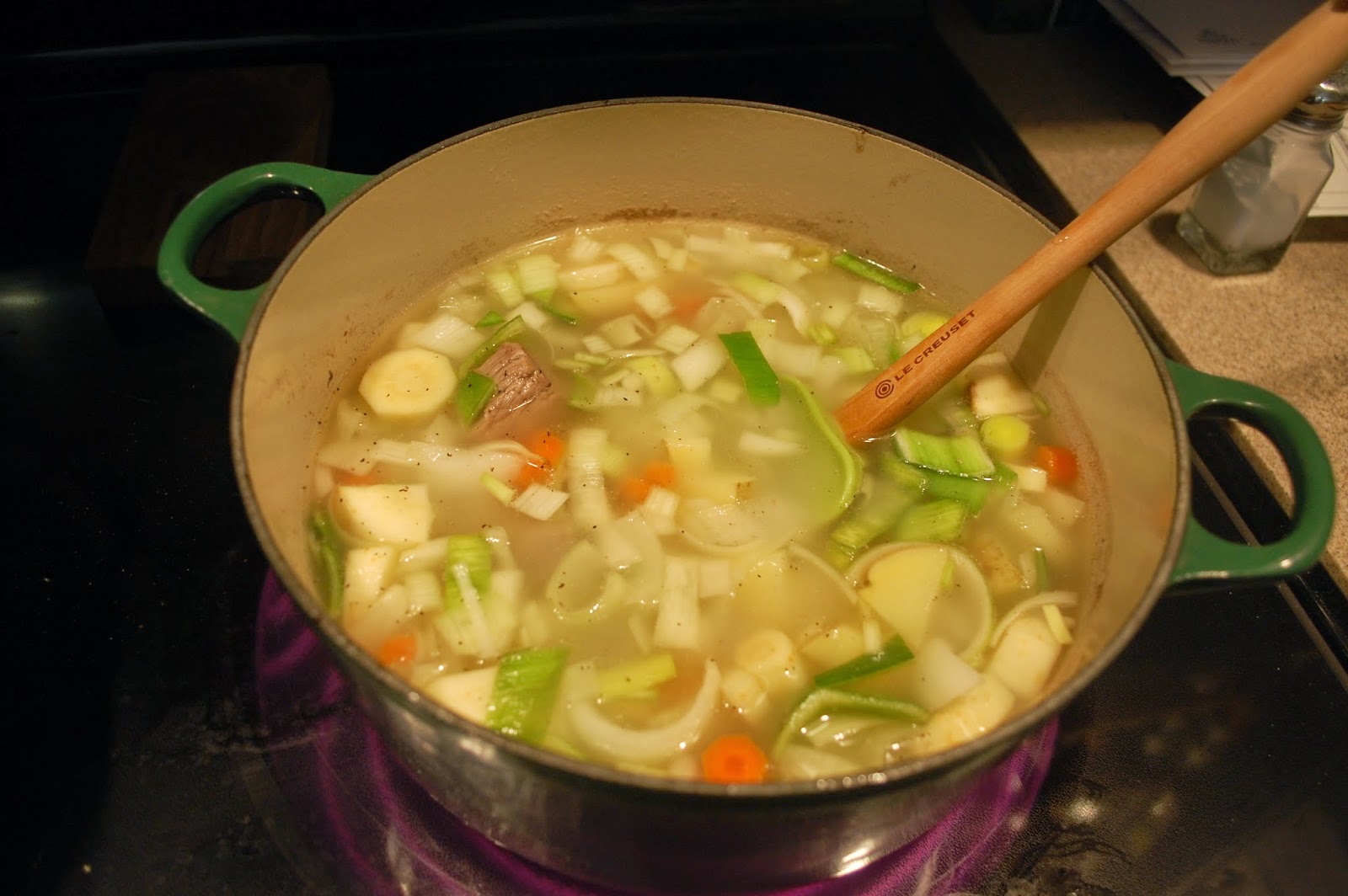 You bring that to a boil... 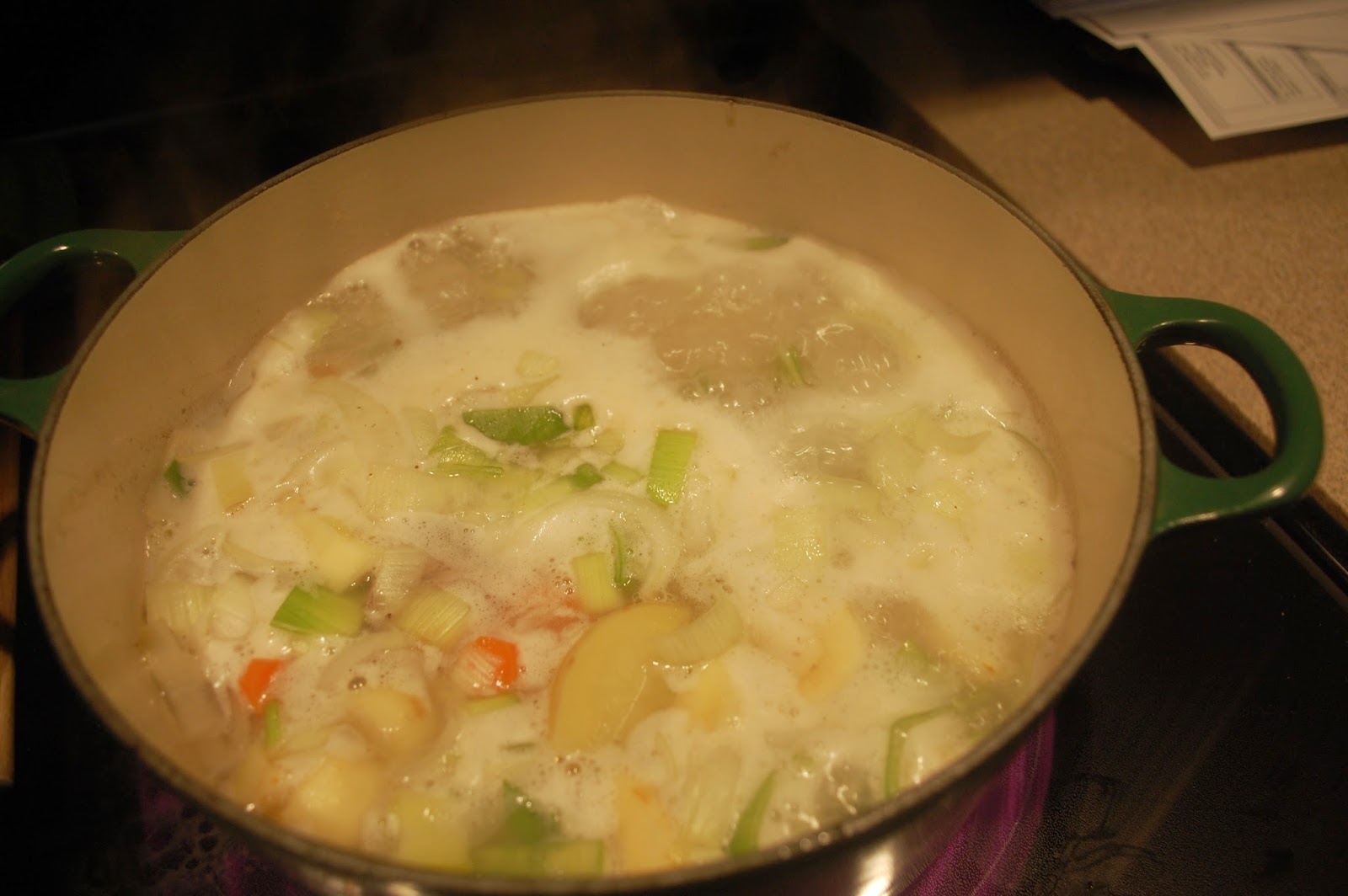 The stew was thick and full of tender vegetables and really tender meat. Salt and pepper were more than enough to add some extra flavor, and kept the dish simple without being boring. It also cooked down enough on the stove that I was eventually able to combine it into one pot, which came in handy when it came to serving it. This definitely isn't the most exotic thing we've ever made, but it was tasty, and I'd definitely make it again.

It's also just cool to think that this is something my great-great-great grandfather might have eaten while miles away from home, waiting to see what was going to happen when he finally saw combat. I've often been curious about what he was actually like as a person - why did he enlist? Why did he choose to leave his home when he was likely married and might have even had kids? What were his thoughts on the war and on Abolition? I'm probably never going to get these answers, but it was still nice to take a moment and think that I was trying something my distant relative might have eaten a hundred and fifty years ago, and I'm really glad we took the time to do it. And it did help that I wasn't making it over a campfire.
Posted by Gwen at 6:56 PM