It's been snowing almost all day, and the temperature has started to drop back down to that zone where I don't even want to walk outside to get the mail, let alone do anything but stay snug and warm at home. There's talk of canceling school tomorrow, and I'm sure the roads are going to be a pain to travel on for a day or two depending on how long the weather keeps up, so I'm not exactly looking forward to venturing out until my little car is going to be able to actually handle whatever's out there. Of course, you still have to feed yourself on days like today, and I had just the recipe to try for a day when it's cold and wet outside.

Now, I'm going to say right off the bat that this is far from the healthiest thing I've ever featured on this blog, but I'm firmly of the mind that as long as you're not planning on eating like this every single day, it's more than alright to treat yourself and this is definitely worth giving a shot. Don't let the high calorie count totally freak you out! I don't remember exactly when I had baked potato soup for the first time, but I'm relatively sure it was at the same restaurant that introduced me to the skillet cookie, and since that was styled as an old west style steakhouse, it seemed to make sense to give this one to our favorite pioneer. Considering all the ingredients are things Kirsten and her family definitely would have had access to during the long Minnesota winter - and there is actually a potato soup recipe included in her cookbook - it just seemed like a no brainer when it came time to pick who would host this recipe.

Unfortunately, the recipe from the steakhouse has been lost, and it's been so long since I've eaten there, I honestly can't say I remember much about what was in it beyond the obvious - potatoes, cheese, maybe some bacon and chives to garnish. I turned to the internet trying to find something that reminded me of the soup, and found a version on Food Network.com that seemed pretty similar to what I remembered, so I figured we might as well give it a try. It's a recipe that could probably relatively easily be made with things you've got lying around the house, and I would imagine you can adapt it to include anything you like putting in your baked potato - onions, for example, I feel would be a decent addition to this soup.

The recipe starts out with the ingredient you'd definitely expect to find in a potato soup, and that is... 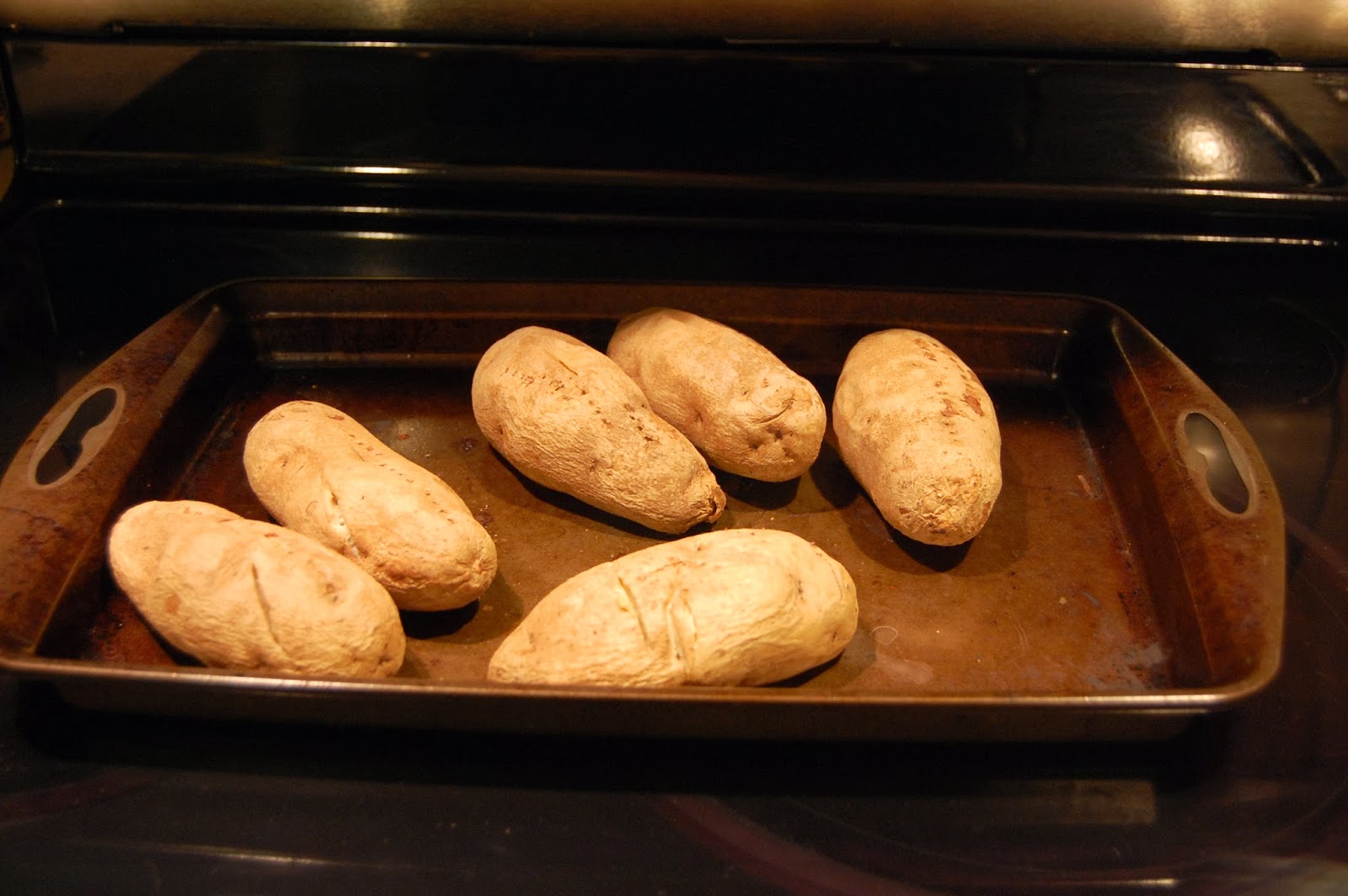 Potatoes. The recipe calls for four baking potatoes, either Idaho or russet. We went for Idaho, and decided to throw in two extra potatoes just to make sure this was really a potato soup, and not just a cream of bacon soup.

One thing I thought might be worth mentioning is a lot of people who wrote reviews of this recipe complained that the potatoes weren't cooked after being in the oven for forty five minutes and decided the whole recipe was a horrible lie because of this. All I can say is potatoes can be a pain to bake, and you really just have to be patient with them. Don't give up just because they're not fully cooked after forty five minutes! You can always just pop them in the microwave to speed the process along.

We also couldn't find the exact kind of bacon the recipe called for, but considering twelve pieces of thick cut bacon is a lot of bacon, I didn't mind too much. It still gave us a lot of bacon to work with. Once it's cooked, you scoop it all out with a slotted spoon.

Which leaves behind this: 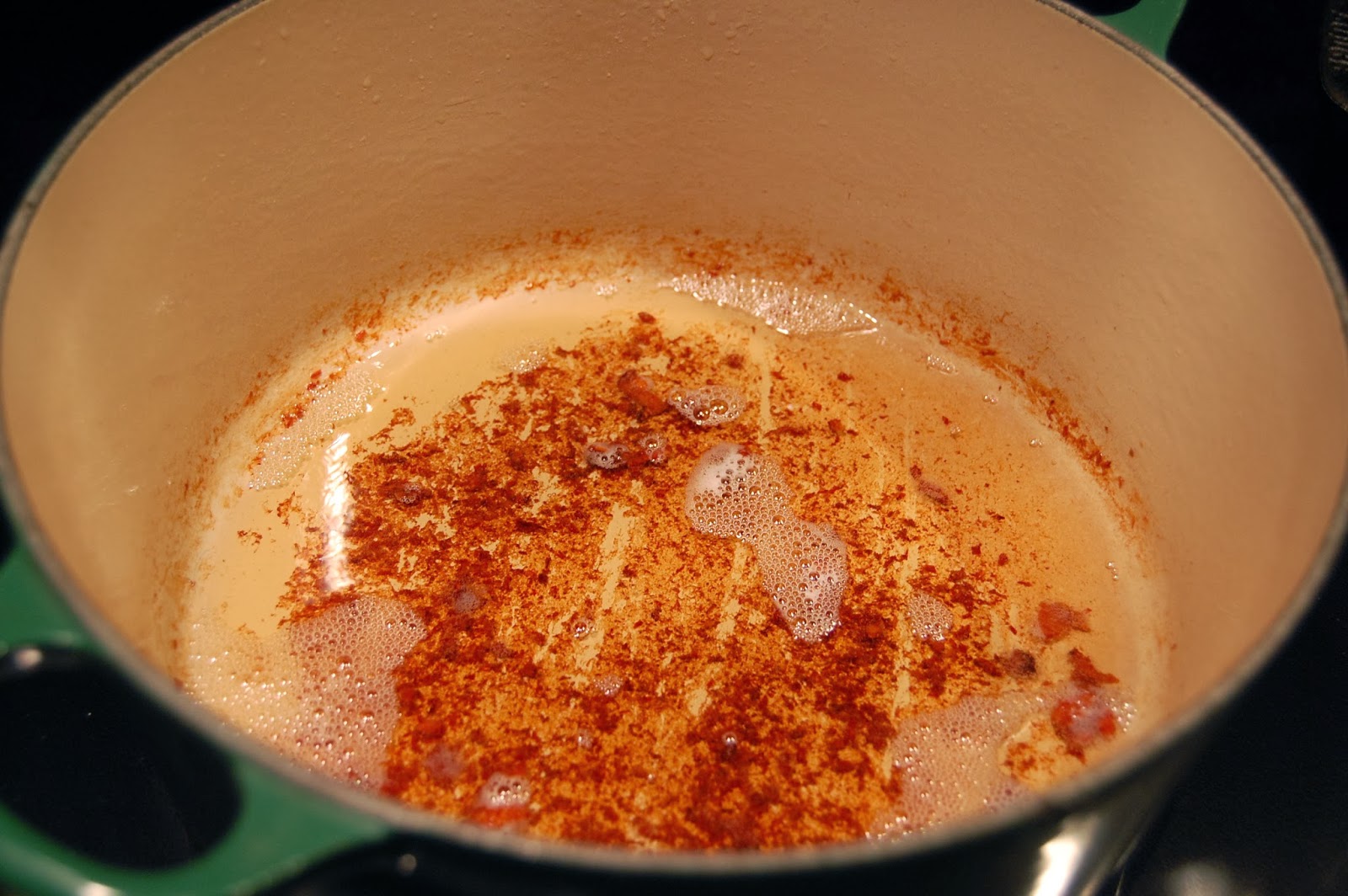 This is pretty much why this recipe isn't exactly the most heart healthy thing in the world, but man, it was totally worth it. Flour is added to the bacon drippings, and once they're combined, you add in the milk. You're supposed to stir it pretty frequently to avoid it scalding, and while the recipe said it would take about fifteen minutes to thicken, ours was ready to go after about ten. It gets a little volcano-ish once it gets hot and thick, so be careful not to turn your back on it or things could get catastrophic quickly. 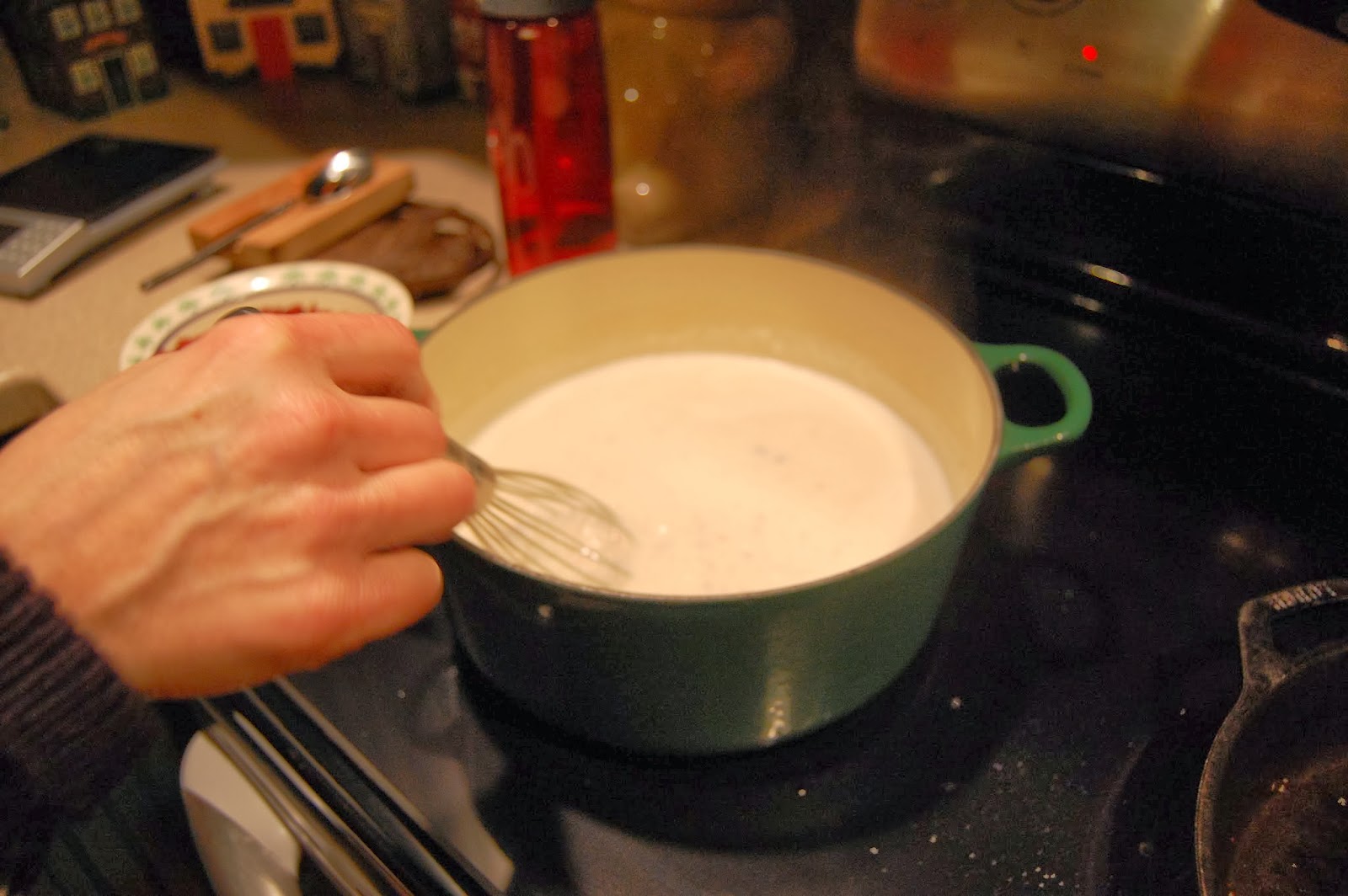 It's a little hard to tell, but by the time I snapped the second picture while my mom stirred, it was really thick and ready for the potatoes to go in. Our potatoes had been cooked and out of the oven for a long time by the time they were added to the base so they were much colder than the liquid was. They stopped the bubbling pretty handily, but I wouldn't be shocked if adding warm or hot potatoes to the liquid might mean you should turn the heat down a little bit to avoid a boil over.

The recipe suggests mashing the potatoes up with a wooden spoon, but honestly, I tried that, and it didn't work at all for me. A potato masher did the job just as well, and it created a really nice thick, lumpy without being too lumpy texture that the wooden spoon just wasn't doing by itself. 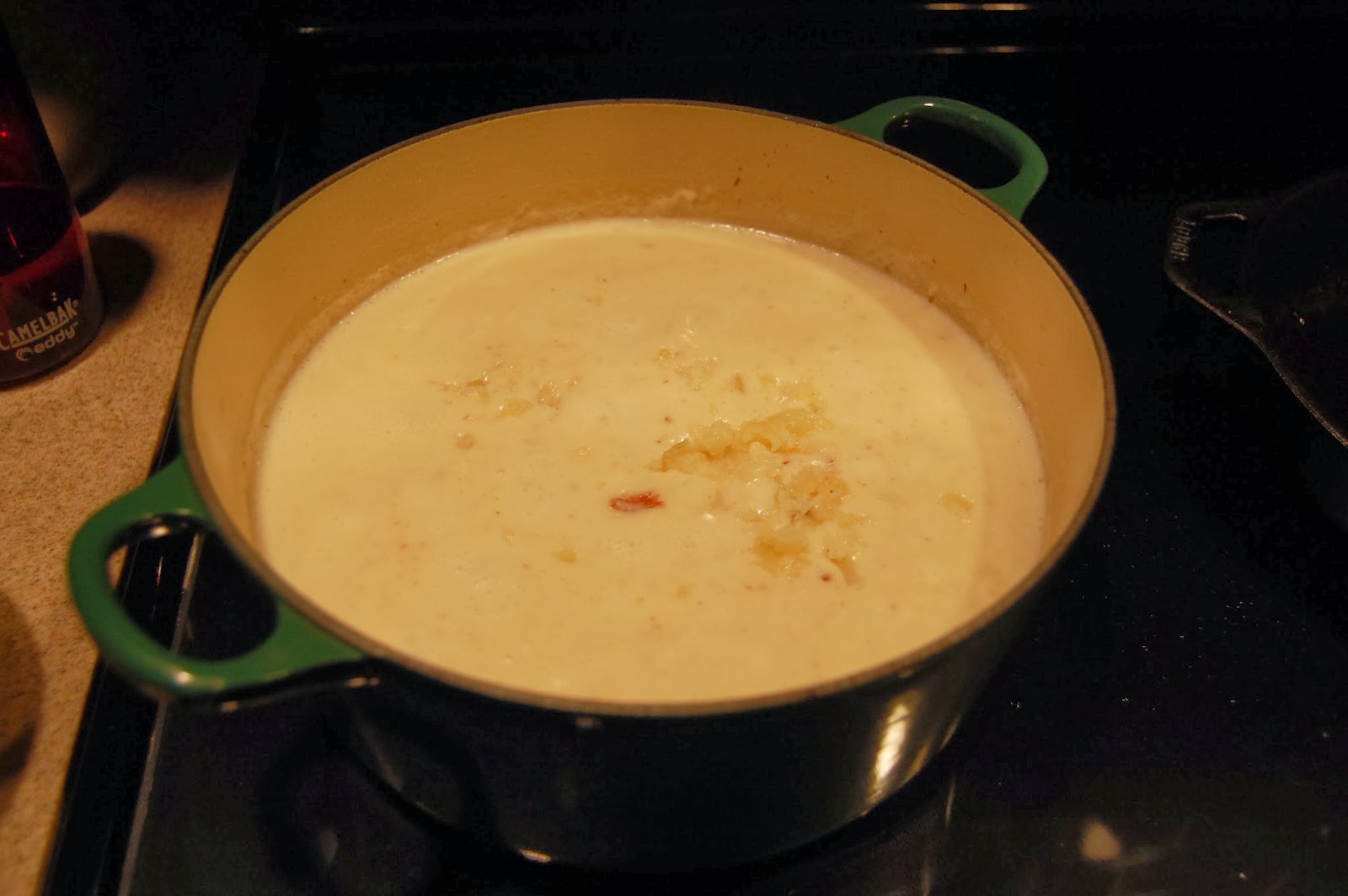 Next comes most of the bacon and all of the cheddar cheese. If you've got the soup on the stove, the cheese will melt pretty much as soon as you toss it in, so you'll be basically ready to serve it within a couple rotations of your spatula or other stirring utensil.

One thing we noticed when cleaning up the pot was that a fair amount of the cheese sort of got stuck to the bottom of the pan, and my mom wondered if maybe this could be avoided if you add the cheese once you take it off the heat, instead of adding it while it's still on the burner. I guess we'll just have to see next time we make this! 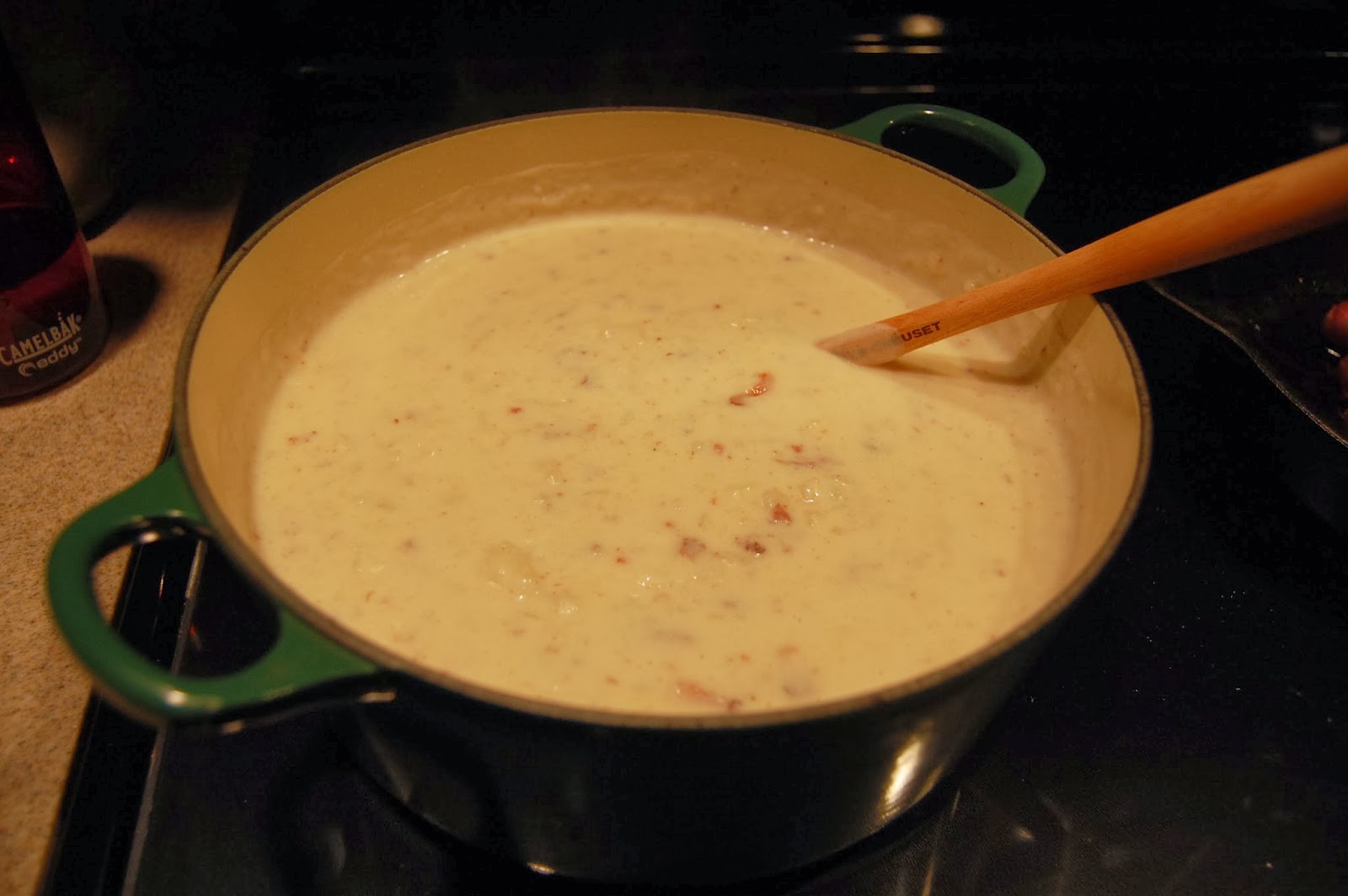 This leaves you with a nice, hot, thick, creamy soup that is totally delicious and just the thing to help cheer you up on a crummy, cold day. You can add salt and pepper to taste, and it definitely does need some, but honestly, I'd rather add my own salt and pepper instead of serving a soup that's too salty or too hot for someone who isn't as into those two flavors as I am. 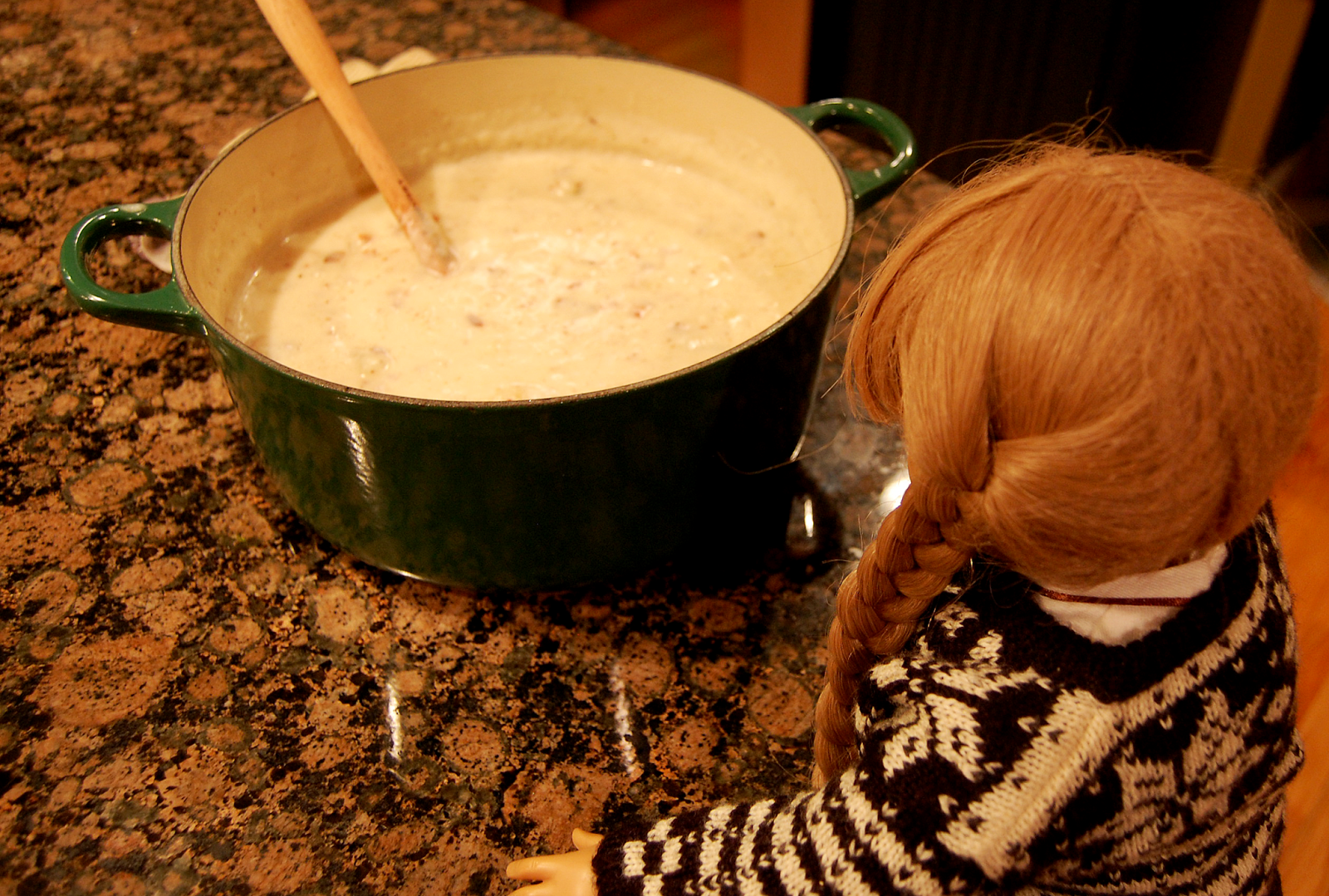 While the soup retained its heat well, it definitely got more congealed and thick as it was left out to sit and get cool, so I would recommend serving it immediately or being ready with some extra milk to help loosen it up a bit if it starts getting more of a pudding consistency than soup.

The recipe recommends serving it with sour cream, bacon and chives as a garnish, which really helps cement this as a baked potato soup instead of just generic creamy potato-y soup. It's got just about everything you'd be served when ordering a loaded baked potato! So, how did it taste? I don't think it'll surprise any of you considering how I've been talking about it thus far that I really enjoyed it. Baked potatoes - and potatoes in general - are one of my favorite things to eat, and having what basically boiled down to being a liquid version of a really good baked potato was pretty excellent. It also tasted a lot like what I remembered eating at the steakhouse years ago, especially when you tossed the chives on top. It was good enough that I was all too excited to have seconds, and am totally looking forward to eating whatever leftovers we managed to scavenge, assuming my brother doesn't get to them first. I was a little worried that the bacon would be really overpowering, especially since it's the base for the broth, one of the main ingredients and a topping, but it was a nice accompaniment instead of turning this into a cream of bacon soup. Still, I'd be careful not to add too much bacon to this, because it definitely can be a strong flavor and I'm not sure a bacon soup would actually be that good.

That all being said, it is filling. It's been a couple hours, and I still feel like I don't need to eat for another week. About a quarter of the way through my second helping I started to have that "I've made an enormous mistake" feeling, and even though I finished it, I kind of felt like I was going to die.

Although it was a little complicated to make while trying to document every step with a decent, non blurred photograph, especially considering I'm not left handed, it was simple enough that it's something I'm relatively enthusiastic about making again, and might even try for a larger group of people than just my immediate family. Overall, this is a solid recipe and I'd definitely recommend giving it a shot even if you're not that comfortable in the kitchen. Trust me, the pay off is worth it! Side note: it goes great with some warm bread, too!
Posted by Gwen at 6:04 PM