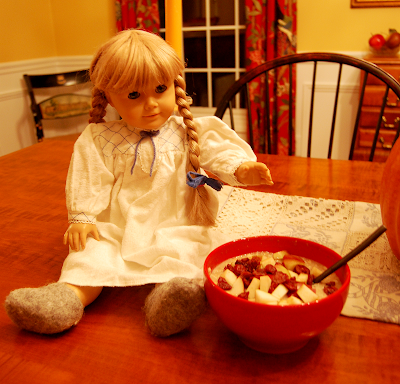 Be careful not to burn yourself!

You know those days where after everything slows down, you sort of just feel like you've been hit by a truck? I have had one of those days. Equal parts stressful and fun (okay... a lot more fun than stressful, but still busy!), I was ready to kick back and take it easy instead of coming up with something complicated for dinner.

So, while this is definitely a breakfast dish, it might have been my dinner tonight.

And by "might have", I mean it definitely was. No regrets.

This is going to be a fairly quick post. Oatmeal isn't too complicated, even when you dress it up a little, but that by no means means that this was a boring or tasteless meal. I got the recipe from Cooking Classy, and you can read it here! It's a pretty easy recipe, and it's easy to customize it if you're not a fan of some of the ingredients, or looking for a way to make this healthier, vegan, or unhealthier.

For example, I just used regular skim milk, and omitted the cream entirely, mostly because we didn't have any in the house. Here's all the ingredients I used: 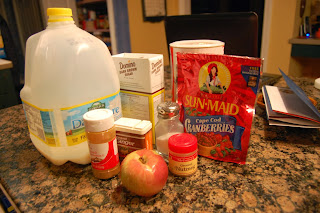 I measured out a little more milk and oats than the recipe strictly called for, mostly because I was really hungry and looking for something that will hopefully hold me over to tomorrow morning. This also meant I got a little enthusiastic with the spices, as you can tell by the giant island of them in the second picture.

I also diced up a whole apple instead of just taking half of it. I'm kind of bad about eating full servings of fruit and vegetables on a daily basis, so it's pretty good to sneak them in where I can. 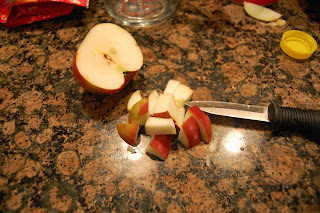 I popped the oats in the microwave for three minutes, and took them out as instructed to stir them. I was a little worried that the oats maybe weren't going to cook up too much in the next minute and a half, because it's been a while since I've made oatmeal in the microwave (... or oatmeal in general), so I was feeling a little rusty and confused.

Fortunately, everything had plumped up really nicely by the time I rescued it from the microwave, and after taking the picture, I immediately threw on some brown sugar.

... Okay, maybe a lot of brown sugar. What can I say, brown sugar is completely delicious and I would eat it out of the bag if that wasn't insanely unhealthy and bad for my teeth.

Toss on the apples and cranberries, and you're good to go! 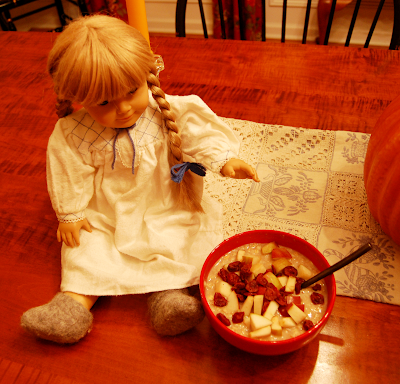 And there you have it! It's a ridiculously simple recipe that you can easily make early in the morning and chow down on before work, or just to substitute for a meal when you're feeling too out of it to break out a million pans and cookware. It's also definitely a simple, filling thing that can be made super healthy if you're in the mood for something lighter, but the apples, cranberries and brown sugar give it some nice sweetness that makes it a lot more interesting than just eating regular oatmeal. The spices smell and taste great, and are basically what you'd put in an apple pie or spiced cookie, so that's a nice extra treat.

Maybe I should investigate breakfast for dinner more often! 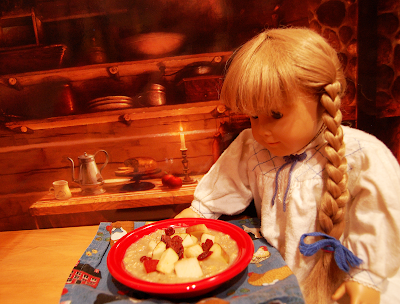 Kirsten seems to think so, anyway!
Posted by Gwen at 5:39 PM