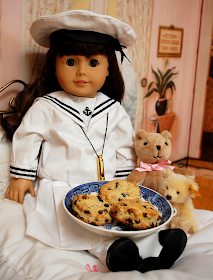 Love him or hate him, there's no question that Teddy Roosevelt was probably the most influential American in Samantha's era. As the youngest US President, he presented a certain vitality to the American public that was just as exciting and interesting to them as his colorful personality and military background. Part of his appeal was that he had a large, young family, all of which were the subject of media attention and enthusiasm... not always in a good way!

For that reason, I've been really interested in featuring a Roosevelt family recipe on the blog for a while now. There are a couple floating around the internet for the interested, but I decided to go with this one because I had no idea what a fat rascal was. Was it a scone? Biscuit? Cookie? No idea! So I dove in and gave it a shot. 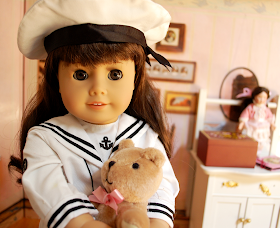 These days, Teddy Roosevelt is mostly famous as the guy who gave us the Teddy Bear because of his supposed act of mercy towards a bear cub while on a hunting trip. This popularized stuffed bears made by companies like Steiff, and became the new It thing to give to children, but also as a fashion accessory for young women. Too bad that went out of style! During office, he also helped improve health and safety standards in commercial food processing and enacted legislation that gave us our National Parks system, which Ken Burns described as America's best idea. His imperialist leanings mean he's kind of a troublesome figure to modern audiences, but there's no question that he was one of the most successful and influential presidents in US history.

So it goes without saying that Roosevelt himself was an incredibly colorful person. Sickly and frail as a child, he grew to be a man who would perfectly embody one of his more memorable quotes: "Speak softly, and carry a big stick."

Remember, that's a metaphor. He was a pretty powerful orator.

His family life was a subject of fascination for the American public. His oldest daughter Alice was a fashion icon, and her sometimes scandalous exploits made her the center of attention for years, even long after her father's passing. His younger kids were almost viewed as the nation's kids, and people loved to hear about their adventures, pranks, and incredibly numerous (and sometimes exotic) pets. I don't know if this recipe was shared with the American public back in 1904, but if it had been, you can bet it would have been a hit, or at least a subject of curiosity!

Apparently this recipe was a family favorite among all the Roosevelts, but Teddy loved to have them as part of his version of a balanced breakfast. I got my version of the recipe from the Food Timeline, which was republished from The Presidents' Cookbook. According to that cook book, this recipe comes from a book owned by Edith Roosevelt. The book is now part of the archive at Sagamore Hill, the family's summer home, which is maintained by the National Parks Service and is open to visitors year round! I really wanted to visit it before my big move, but unfortunately, that's just not in the cards.

The recipe refers to these as biscuits, so that's what I went in expecting them to be like. It's pretty straight forward, and if you've ever made a biscuit or scone before, you won't run into any problems with it. Because this has been adapted into a modern cookbook, you've got temperatures and accurate measurements, so it's a taste of history with none of the hassle of other historic recipes.

I was bad and cut my recipe in half, which is sometimes bad to do when you're baking, but the original recipe just seemed way too big for the audience I was cooking for. I took two cups of flour, 1/2 teaspoon of salt, 1/8 cup of sugar, and two teaspoons of baking powder, sifted them together, and cut in 3/4 of a cup of butter until the mixture was grainy. I stirred in 1/2 pound of dried currants, made sure they were well incorporated in the flour and butter mixture, and then gradually added 1/2 of a cup of milk until I had a dough. 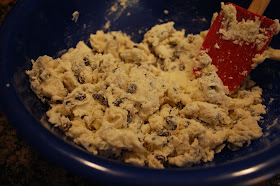 This got rolled out to be about half an inch thick as instructed, and then I put them on a baking sheet. Because I wasn't sure that these classified as scones, and they were actually called rolls in the original recipe, I played it on the safe side and gave them space to grow if necessary on the sheet. Fat rascals are going to be fat, right? They bake in a 450 degree oven for about twelve minutes according to the recipe, and mine were definitely done at that point.

It turns out this was an unnecessary precaution, as they stayed pretty flat the whole time I baked them. 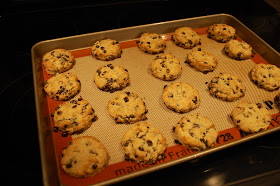 So, at this point, I was wondering if I did something wrong. These don't really look fat, do they? At least they smelled good. 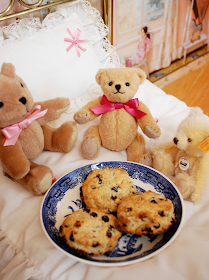 Apparently, fat rascals are actually a relative of the rock cake and originally were invented in Yorkshire, England. They've very similar to a scone, and a little tougher than an American style biscuit, and while some of them do look a little puffier than mine, others look basically identical to the ones I ended up with, so I guess these worked out pretty well!

Like rock cakes and scones, these are also a good accompaniment to tea. I'm not sure how they wound up a favorite of the Roosevelts, but considering how multipurpose they are, and how many cakes this recipe makes, I can definitely see why they'd be a hit with a large family with big appetites.

Honestly, I was expecting these to get a modest reception with my own taste testers. I liked the ones I sampled before bringing them over to my grandparent's house for everyone else to try, but I didn't think they were amazing, or anything especially unusual. They were essentially a scone with currants, which is a tasty combination, but not exactly groundbreaking.

Imagine my great surprise when everyone started raving about them! I've had multiple requests to make them again, or to give people the recipe, and although the recipe (which again, was half the original recipe's size!) made tons of rascals, the leftovers were consumed extremely quickly. I definitely wasn't expecting this strong a reaction, so it worked out pretty nicely for everyone involved, I think. I guess I got a glimpse into what it might have been like to be visiting Sagamore Hill when all the Roosevelt kids and their parents were there. That's a pretty cool taste of history, if I do say so myself! 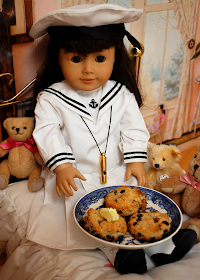 Especially when you eat them hot with a little bit of butter!
Gwen at 8:42 PM
Share