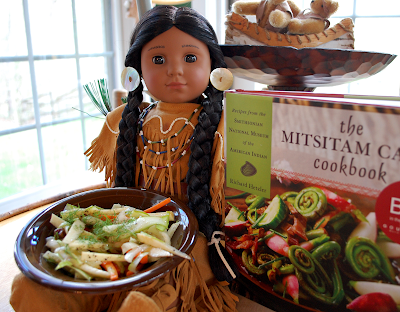 A tasty but time consuming salad.

Every once and a while, people ask me if I'd ever consider a career in the culinary world after taking such an interest in culinary history and cooking. This post is pretty much proof that I'm not sure I could cut it in a real restaurant setting.

Don't get me wrong, this was very tasty and definitely worth the effort, but, whew. The idea of doing this for hundreds and hundreds of people? No thank you. I just don't have the stamina! 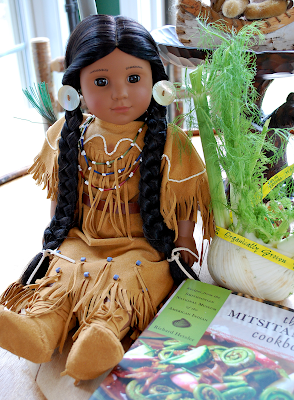 So, I bet no one's especially surprised to see me whipping out the Mitsitam Cafe cookbook again. I can't shut up about this cookbook, or perhaps more accurately, the food at the restaurant, and I recently got to take my mom there for the first time! Fortunately, I didn't oversell it, and now I've got another devoted fan.

By the way, the reason why we were down there is because I got into a grad program down there for Public History, which means I'm essentially getting a degree that will hopefully land me a job working at the World War II Museum in a museum! I just realized I hadn't said anything about it on the blog yet. I'm very excited, even though it's probably going to mean some serious changes to A Peek into the Pantry. I'll talk more about that when we get closer to D-Day!

Anyway, while we were at the restaurant, my mom ordered a salad that used fennel, carrots, and lots of other yummy vegetables. When we got home and started poking around through the cookbook, she said the Fennel and Fig salad sounded virtually identical to what she'd had, and encouraged me to give it a try as an accompaniment to our weekly family dinner. I figured sure, why not? As this looked like a pretty straight forward recipe. Sure, there was some chopping involved, but how time consuming could it be?

Before we get into that, a brief note about the ingredients in this salad. Fennel is not actually native to the Pacific Northwest, and while it had been introduced to North America by 1764, and does grow wild all over the country, it's not necessarily guaranteed that Kaya would have ever eaten fennel. She would have eaten a plant that looks a little bit similar commonly known as biscuit root, a member of the Lomatium genus. These plants had starchy roots that provided important sustenance for many Native American groups. The roots could be cooked, dried, or made into flour. Some people mashed them up and made them into cakes, much like the Nez Perce used camas roots to make finger cakes. Although their flavor is fairly different from fennel, the shape of the plant is quite similar, so I can definitely see how this salad is meant to evoke the native food of the Pacific Northwest.

To start the salad, you cut one bulb of fennel up into thin strips and set the fronds aside for later. These slices get put in a roasting pan with a little oil and put in a 350 degree oven for somewhere between 15 and 20 minutes,or until they're tender, according to the book. You want to make sure they have texture.

Then you chop up about two or three peeled parsnips and carrots into two inch matchsticks, and then take about six or eight stalks of newly headless asparagus and peel them into thin strips with a vegetable peeler.

When you're done, you put them all into a bowl and mix it all together. 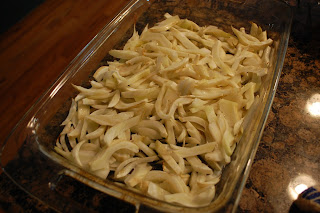 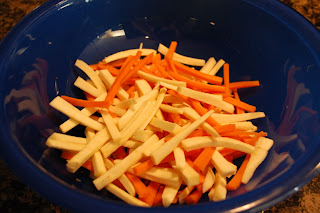 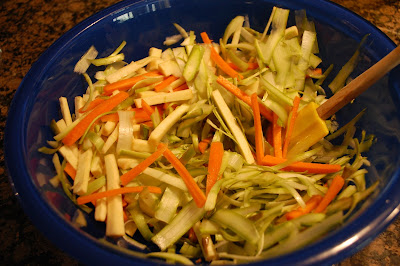 I know this doesn't seem like a lot, but oh my god, it took forever. I'm not someone who's super fast with a knife because I don't trust myself not to cut my own fingers off, so cutting three carrots, two parsnips, and five stalks of asparagus into very precise, tiny, uniform shapes is a lot. I'd say this easily took somewhere between half an hour and 45 minutes to get everything prepped, and it didn't help that this was coming on the heels of finishing some other cooking projects, so I was already feeling kind of worn out from being on my feet all day. I seriously can't imagine doing this for a living because it's exhausting just making one serving.

Fortunately, the vinaigrette was easier, if still a little involved time wise. You take 1/3 of a cup of cider vinegar and cook it over low heat to get it reduced. This then gets poured over 1/4 of a cup of dried figs... or more if you're like me and really enjoy dried figs. These are supposed to get plumped up in about 15 minutes, but honestly, I didn't notice a significant difference.

The figs get taken out and chopped into quarters according to the cookbook, but I made mine smaller to try and spread the wealth a little bit since a lot of people were going to have opportunity to eat this. I then whisked in 3/4 of a cup of canola oil and 1/4 of a cup of honey as instructed with the vinegar, added some salt and pepper, and added the figs back in. 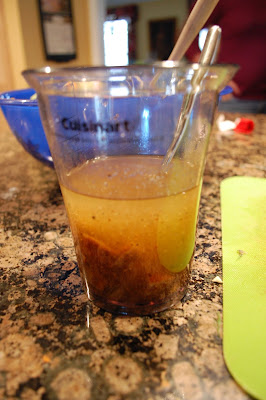 This gets drizzled over the salad, which gets tossed and has chopped up fennel fronds sprinkled on top of it. 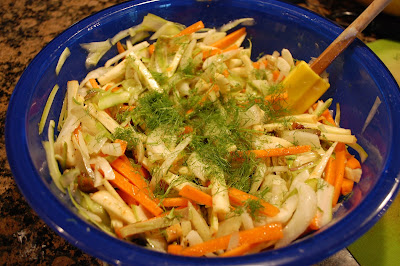 Although being so careful with your knife cuts was frustrating, I do have to admit, it makes for a pretty salad. 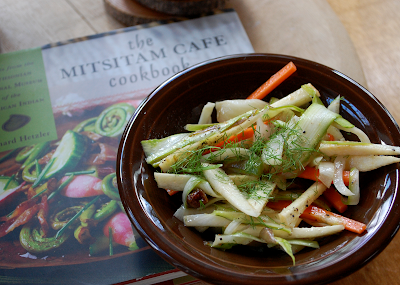 So, don't get me wrong: this salad was delicious. The vinaigrette was a little oily, and I might cut back on that if I ever make this again, but otherwise it had a really nice texture and flavor, and this is coming from someone who doesn't usually love fennel. I also really enjoyed the raw asparagus! That's not something I'd ever had before, and having it so nice and thin was a neat way to enjoy a vegetable I've been slowly making my peace with.

My mom also said this was very clearly the salad she had at te museum, which is more good news! In my trips to the restaurant, I've definitely noticed that not everything on the menu is in the cookbook, and not everything in the cookbook is on the menu. A lot of the recipes I've found appealing I haven't gotten to eat in person, and some of the dishes I'd like to make at home don't seem to have public recipes. Nice to know that this one is something they still have for you to eat there, or bring home to make for your friends and family.

But in the future, I think I might leave the fancy salads to the professionals! 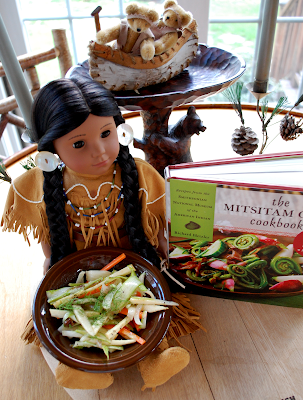 And that's definitely never going to be me...