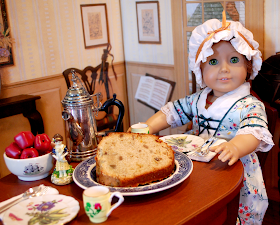 Perfect for any Governor's Ball!

Last year, my parents and I took a quick trip down to Colonial Williamsburg in December to finally experience the festivity that is Williamsburg at Christmas. You can read about the trip on the blog, but to recap, we learned that in Felicity's time, most people didn't care much about Christmas. People in the New England colonies didn't celebrate it at all! In Virginia, families might put out pine boughs and holly (and mistletoe!), but there generally weren't big parties or family gatherings on December 25th proper.

Instead, most of the big events were saved for the last day of the Christmas season: January 5th, Twelfth Night! In Felicity's Surprise, she and Elizabeth are invited to attend a dance lesson at the Governor's Palace on the 5th, where they no doubt would have been served delicious treats much like the cake I baked this weekend. The recipe might seem a little intimidating at first glance, but it was a breeze to make, and turned out to be one of the tastiest things I've made this holiday season.

Which is saying something. Most of the stuff I've made over the last few weeks has come out pretty well! 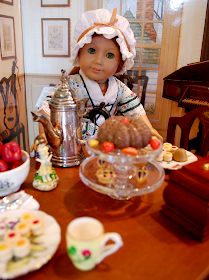 Colonial Williamsburg is a great resource for historical and historically themed recipes. Not only do they have several cookbooks in publication at any given moment, but their website also hosts a number of recipes and articles discussing food history for anyone curious. Their History is Served blog is what got me thinking about starting this blog in the first place, and it's something I go back to often to get inspired and find new things to try out.

This recipe actually shows up in two places: as an article on their main website and on History is Served. The first link only shows the recipe almost exactly as how it was printed in Hanna Glasse's cookbook The Art of Cookery Made Plain and Easy, which was first published in 1747. This means when you first stumble upon it through a quick Google search for Twelfth Night Cake recipes, you panic a little bit, because it calls for four pounds of flour, four pounds of eggs, seven pounds of currants and six pounds of butter. That's a lot of cake!

Fortunately, History is Served always publishes the recipe as it originally appears, and then provides a modern interpretation that you can comfortably make in your own home. The recipe they've come up with - and tested out, which means you're going to be pretty safe trying any of the recipes they've published on their blog - isn't entirely dissimilar to a pound cake, because most of the main ingredients are in a 1:1:1:1 pound ratio.

You start off by beating a pound of room temperature butter in a stand mixer until it's "creamy", which the blog says should take about a minute. Once that's done, you add in a pound of white sugar and cream it together with the butter until it's light and fluffy. The recipe reminds you to scrape down the sides of your bowl before continuing. I do this all the time anyway, because stuff usually winds up sticking to the walls of my mixer and doesn't incorporate well. I like my KitchenAid (my mom's KitchenAid, let's be honest here...), but sometimes I wonder if I actually work faster with a hand mixer. 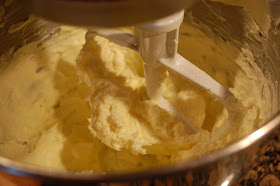 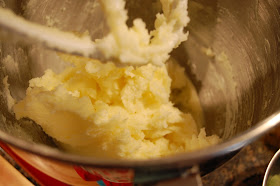 Next comes the part that seems to have intimidated most of the people trying this one at home, including me: the eggs! Although the historians and chefs at Williamsburg have adapted the proportions of the recipe to make this a lot easier for you to make yourself, the basics of the recipe are the same, and since this is an old fashioned, pre 1850's cake, that means no baking soda or powder. Your rise is going to be coming from these eggs.

And you need a pound of them.

How do you measure a pound of eggs? Simple. Just keep adding eggs to a scale until you get a pound. Leave them in the shells! The food historians at Williamsburg reassured several commenters that the shells actually don't do much to throw off the weight. Just get as close as you can to exactly one pound, and you should be good to go.

The eggs get added in gradually, so because I like to make things difficult for myself (and didn't want to risk a mudslide of eggs into my bowl...), I broke each egg in individually and added it to the mixer while it was going at a medium high speed, as per my instructions.

You're left with a super runny, but still somehow pretty thick batter. 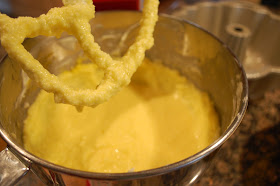 Next comes your dry ingredients. A pound of flour, 1/2 of a cup of almond flour (this is to save you the time and hassle of making almond flour from scratch, like the original recipe wants you to), one teaspoon each of nutmeg, mace and ginger, 1/4 of a teaspoon of cloves and 1 1/2 teaspoons of cinnamon all get sifted together. Again, no baking powder or soda.

(By the way, if you find out you forgot to get mace at the grocery store, you can substitute with allspice. Not that I know from experience or anything.

This gets added in to your wet ingredients nice and gradually with the mixer on a low speed. Once that's done, it's time for the fruit.

Although the original cake had seven pounds of currants (I guess Hanna really liked currants!), this recipe only wants you to use 1/2 of a cup each of currants, candied orange peel, candied lime peel and candied citron. This blended in nice and simply, and you're left with a heavy, fluffy cake batter. 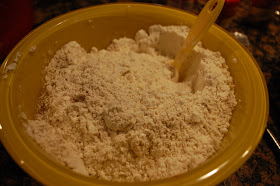 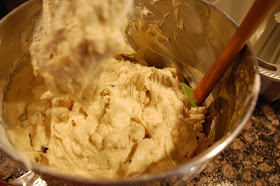 Finally, you add 1/4 of a cup each of brandy and sherry, which takes this back to feeling more like a cake batter than a bread dough. Historically, this case would have had brandy and sherry poured over it over the course of several weeks to help keep it fresh for a long period of time. Remember, we're mostly pre-refrigeration, too!

This all gets poured into a greased ten inch Bundt pan, and gets put in a 350 degree oven for about fifty minutes. 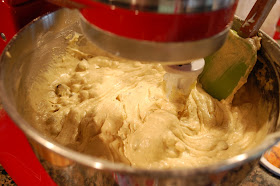 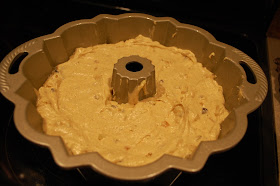 Now, I have had some issues with scratch cakes before, especially with historical recipes. I've had several incidents where my cake just won't cook in the center, and I'm left trying to decide if I want to risk burning it, or just give up. My last baking powder less cake turned into a burned mess on the outside, and I definitely didn't want that to happen again. I turned the heat down to 325 degrees and left it in for about another half hour, and it finally came out done! 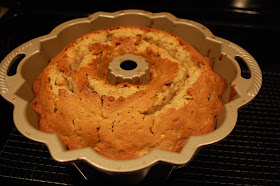 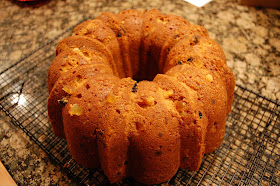 This definitely makes a lot of cake. It came out of the pan nicely, but a lot of the fruit got stuck to the pan and kind of needed to be carefully reattached to the little craters they'd created in the exterior of the cake. 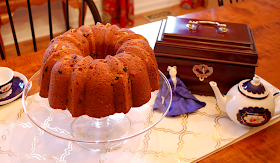 Now, the last cake I'd made without any leavening agent besides eggs burned on the outside and was really rubbery, with an unpleasant crust that probably would have been thicker than I'd like even if it hadn't burned.

This cake was delicate, with only a light crust, and was very easy to cut into. You can't really tell from the slice I photographed, but there's a very good distribution of the candied fruit - the opposite side of this piece had a lot of currants and orange peel bits in it. 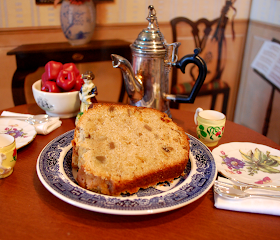 Now, yes, this was a modern interpretation of a historical recipe, but most of the technique was still the same as the original, and most of the historic or historically inspired cake recipes I've made have been very dense, thick cakes, which are definitely more like a tea bread than a birthday cake texture wise.

This one? Not so much.

It's still a little denser than something you'd make out of a cake mix box, but it was much lighter than I'd thought it would be, and not at all rubbery even with the eight eggs! While the alcohol did cook off a fair bit and thus wasn't as present as it could be (or would have been, if I'd poured some over the cake to help preserve it in advance for when I was serving it), there was enough to make this a little different from your average spice cake, even though that at the core is what I'd say this is. The combination of spices is perfect, and this would pair perfectly with a cup of tea.

Or coffee, if you're currently protesting unjust taxation on luxury goods.

The candied citrus was really the only part I didn't love. I'm not a huge fan of fruit that aren't raisins or currants in my cakes, and this wasn't an exception. Honestly, I'd probably make it without the candied peels and just use currants next time.

Otherwise though, this was a huge success. I was a little worried when it didn't look baked at all after fifty minutes, but everything wound up working out fine anyway. The adapted version of Hanna Glasse's recipe might still seem a little intimidating to a modern baker, but this was a lot more straightforward and stress free than I thought it would be. If you're looking to recreate a little piece of holidays past, this is a fun way to put yourself out of your comfort zone and learn that it's not impossible to have a light, fluffy cake without adding baking powder. 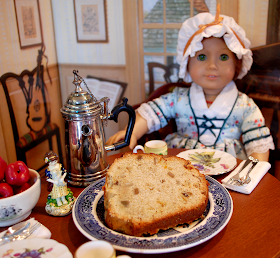 Although I don't want to do any dancing after having a piece or two of this cake... Go on without me, Felicity.
Gwen at 7:20 PM
Share