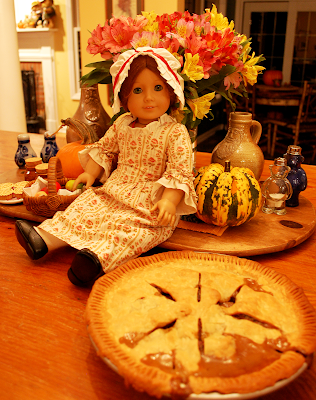 Get in touch with our culinary roots!

A few years ago, one of my Australian acquaintances (who later became my lovely girlfriend) mused about how odd it is that Americans just don't have meat pies or pasties as a staple item on most restaurant's menus. They're very common in Australia, New Zealand, Great Britain, and other former English colonies, but why not the US? This question has stuck with me, because it really does baffle me a little bit. We Americans are a very pie loving people, but for most of us, when we hear pie, we think of fruit pies.

Okay, okay, we do have chicken pot pies, and occasionally something a little more like a meat hand pie might show up on an American menu, but once upon a time, we used to eat meat pies just as much as our British cousins. Pies were - and are - a convenient way of preparing food, and early British settlers to the New World definitely brought their favorite recipes along with them. Although it's less common now, Felicity definitely would have enjoyed savory pies for main courses, and the recipe I made today is from her cookbook! 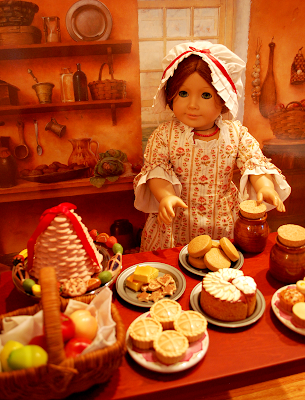 Pies have been eaten pretty much since humans figured out how to make anything resembling a pastry. The Egyptians, Greeks and Romans all ate variations of pies or pasties even if they didn't call them that, and they're very common in the medieval period. The first use of the word pie comes from the 1300's, and over the years, the British became pretty much the pie masters. Originally, pies were cooked with an extremely thick crust called a coffin, which basically just meant box, not necessarily "box to hold and bury a corpse in", although considering these coffins usually held various bits of dead animals inside them, it does seem pretty appropriate.

Coffins originally weren't meant to be eaten. Some of them could be several inches thick, and they were unseasoned and bland! Instead, they were considered to be a safe container to cook and store the meat in, and were even reused. Eventually, these thinned down and became edible, and are now some of the tastiest parts of the pie!

They were still extremely popular when British colonists came to America, and were served at almost every meal in some form or other. At some point, American colonists started deviating from making savory pies the staple they used to be and instead made fruit pies. Fruit pies weren't unknown in Britain, but were called tarts. Americans somehow got the terminology jumbled, so now we call both a pastry with sweet or savory filling a pie. The recipe in Felicity's Cook Book is a beefsteak pie, and is much more simple than some of the historical pies eaten in years before, which could sometimes just be crammed full of pieces of seven or eight different animals. Not exactly appetizing to a modern eater!

The cook book mentions that Felicity and her family would have eaten this warm for dinner - their midday meal, which was usually the biggest meal of the day - and then cold for supper (their late in the evening meal, which was usually just leftovers from dinner) and breakfast the following day. I'm not sure how much I'd like this cold, but I'd definitely be willing to give it a try in the name of historical research!

You start off by lining a nine inch pie pan with a store bought pie crust, and then go deal with your meat. The recipe calls for one or two pounds of beef rump roast. I used a pound, and it made more than enough. The beef needs to get cut up into 1/4 inch thin steaks, and are then pounded and tenderized "until they are tender." I'd never tenderized meat before and didn't really know what I was doing, honestly. Next time, I might be a little more brutal with it, because the pieces I wound up with were definitely a little rubbery. Once they were done, I sprinkled them with salt and pepper, and then put them in a skillet that had been sprayed with non stick cooking spray. I browned them in the pan and then transferred them to the pie pan with the pastry. 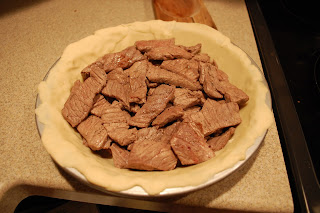 Now, I know some people frown on using premade ingredients, but to be totally honest? I hate making pie crust. I like baking a lot, but fighting with the crust when I can just get a nice, tasty crust from a package? Totally not worth it. I also like trying to recreate the American Girl recipes exactly as they're written in the cook books (with the exception of cutting down on the insane amount of cooking oil they sometimes want you to use), so I didn't go for home made on this one. Sorry folks!

Okay, so now you need to make the gravy. Gravy can be difficult to make, and I've really only done it a handful of times. This time, things didn't exactly work out the way I'd have liked them to, but it probably could have turned out worse.

You take two tablespoons of flour and four tablespoons of water and mix them together in a bowl until it's a smooth paste. Once that's done, add two cups of beef broth to the pan you cooked the beef in and heat it over the stove until it boils. The flour paste then should be slowly stirred into the broth and cooked until the gravy is thick. At that point, you let it simmer for another three minutes, sprinkle a little salt and pepper over the top, give it a final stir, and then pour it over your meat. My gravy never really got thick, but I'm chalking that up to user error instead of the recipe being at fault. The flour paste didn't really get incorporated as well as I would have liked it to!

Don't worry, there's more seasoning in this than beef broth, salt and pepper! Dried parsley, marjoram, savory and thyme get sprinkled over the top, along with two tablespoons of butter chopped into tiny cubes. 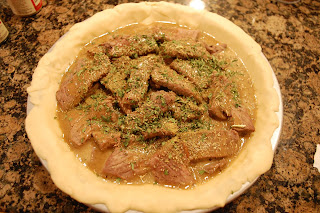 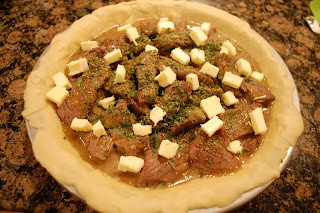 Another pie crust gets draped over the top and pressed on to seal it. Don't forget to cut your slits in the top! 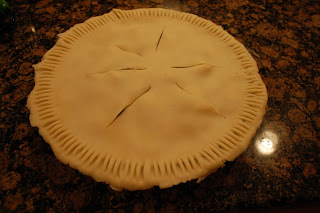 And then your pie bakes in the oven for 50 minutes at 400 degrees, or until the crust is golden brown. Mine looked ready to go by 50 minutes!

(As a side note, colonial homes often had separate bake ovens for pies, located right next to the main hearth. The bricks would be heated from the fire in the hearth, and colonial bakers would judge whether the oven was hot enough to bake a pie by seeing how long they could hold their fist in the oven before it got too hot! Taverns had especially large bake ovens, which could hold a pretty impressive number of pies all at once, while a family might be able to put only a couple in at a time.) 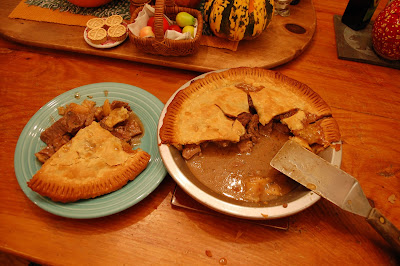 So, fair warning: this can get a little messy. My gravy totally bubbled up and over the sides, creating quite a spill in our oven. I would definitely recommend baking this on a baking dish, which is what I should have done... and then promptly forgot until I saw the initial mess while checking on the pie. The gravy also managed to basically totally destroy the bottom crust, which was left a soggy, flabby mess. It still tasted okay! But I like my crust nice and crusty, for lack of a better descriptor, and the bottom half definitely was not.

The top was nice and flaky, though! No regrets about using pre-made pie crust in that regard. And while the meat was a little chewy (I really should have tenderized it a little more!), the flavor was pretty good. The spices were a nice combination, and even with the gravy and crust, the dish didn't really feel unpleasantly heavy. Just a nice, stick to your ribs kind of dinner that's pretty perfect for the chilly fall days we're right in the middle of. Next time, I'd want to try and get my meat easier to chew and gravy less watery, but overall, I can't say this dish was a complete disaster. In fact, I'd say it actually turned out pretty well, especially since my taste testers seemed pretty happy to go back for seconds.

Would I want to eat this for dinner every day? God, no. But if I was doing nonstop manual labor or otherwise needed to do a lot more work than sitting at a desk all day, I think I'd be on board for the pie at every meal diet. Let's maybe just add some vegetables or potatoes next time. 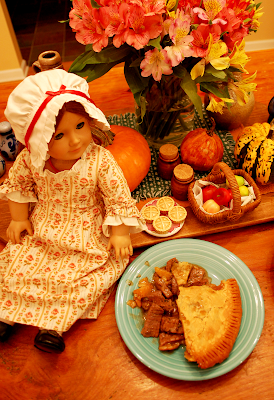 Not that colonial vegetables were much better for you...
Posted by Gwen at 7:59 PM