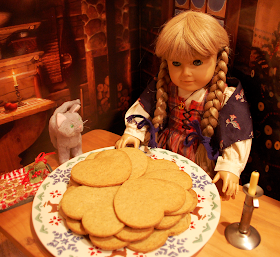 There is a debate going on in my house about this recipe: my mother swears we've made this exact one before, as in the recipe that's printed in Kirsten's Cook Book. She says when I was in kindergarten, she made these cookies for my class during our curriculum about different cultures and cultural practices around the world because my teacher was Swedish, and because of Kirsten, I was kind of representing Sweden. I'm virtually certain that we've only owned a copy of Kirsten's Cook Book since last year, considering I don't remember any of the recipes or pictures inside of it from my childhood and we definitely do not have another copy of it floating around the house. Even if we did at one point, why would we have ever gotten rid of it?

Either way, despite not being Swedish, we have known of pepparkakor for quite a long time, and as a fan of spiced cookies and cakes, I've been eager to break out the recipe for this blog for a while. I've had a couple near misses and actual flops with official American Girl recipes before, but I think I can pretty safely say this one is a winner. It makes quite a lot of cookies even if you're using a big cookie cutter, it's a straight forward recipe, and the end product just tastes good. 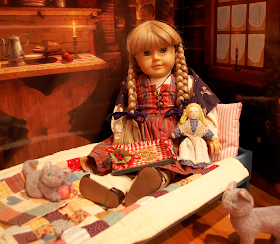 Okay, so this is technically another "probably should have been done during the holidays" post, but I wanted to focus the month of December on characters and customs I hadn't already showcased... and then wanted to make these cookies anyway, so here we are.

Pepparkakor are Swedish ginger cookies, and although they haven't always been deeply associated with Christmas, they've become a popular mainstay of Swedish Christmas celebrations, appearing on both tables as a snack and Christmas trees as decorations! You can still buy or make them yourself year round, though. The recipe was originally brought to Sweden in the 1300's by German monks, and did originally include pepper, thus the name. The pepper was eventually dropped from the recipe, but the other spices from the original remained. The cookies became more popular in normal households after the price of imported spices became more affordable, and started appearing as a staple of the holiday season in Sweden at some point in the 19th century, just in time for Kirsten and her family to bring the recipe with them to Minnesota!

Fun fact, a little set of pepparkakor cookies was the first non straight from AG I ever bought for my Kirsten from a local craft fair back when I was maybe five or six years old. I recently found a shop on etsy that seems to sell the same ones if you're interested in getting any for yourelf!

The recipe printed in Kirsten's Cook Book is a fairly straight forward cookie recipe, although I was surprised to find out that it calls for maple syrup, not molasses. I'm very certain that we had to use molasses one time while making these, and was fully expecting needing it here. I guess we didn't!

You need two sticks of room temperature butter and one and a half cups of sugar to begin. The recipe surprised me again by saying you needed to press the butter and sugar into the sides of the bowl and then stir. Why not just say you need to cream the butter and sugar together? It's basically the same thing.

Once they're well combined, you add an egg, two tablespoons of maple syrup and one tablespoon of water and combine the ingredients well.

... In theory. The dough I wound up getting felt very flaky and difficult to work into a ball, or get to stick together much at all. With some serious convincing, it managed to come together, but it still took some effort and patience, the latter of which I don't always have. I think this is a pretty typical issue to run into with this recipe, because I definitely remember having similar issues with it before. 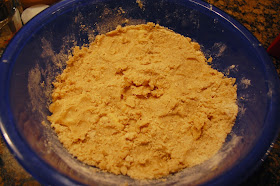 The recipe recommends you chill this dough for about an hour, but I got tired and ended up leaving it in the fridge over night. I should have known not to do this. About a month or so before I got the idea for A Peek Into the Pantry, I was helping my boss with an American Girl themed program at one of our local schools, and we made pepparkakor while we were teaching the kids about Kirsten. We had to leave the dough in the fridge for two nights, and when we took it out, the dough was completely unworkable, it was so cold. I wound up needing to hold small balls of it in my hands to warm it up enough to be anything close to pliable, so the kids actually made their cookies by pressing the dough into the cookie cutters, instead of rolling it out and actually cutting the cookies from a sheet of dough.

This is pretty much what I had to do this time, although with patience, I was able to get it to a consistency where I could roll out the dough. This ended up taking a much longer time if I'd just chilled the dough for as long as I was supposed to in the first place, so I'd definitely recommend not letting it sit too long in your fridge. If it is too hard to work with, heat palm sized balls in your hands until the dough warms up enough to roll out. It should be easy enough to combine multiple balls of dough once they're warm enough to squish and roll out. 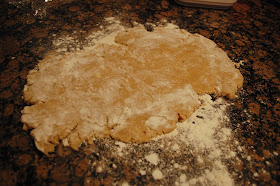 You can use pretty much any shape you'd like to make the cookies. Traditional shapes include hearts, moons, stars, flowers, people, even goats and pigs, especially around the holidays! I don't have any goat or pig cookie cutters though, so I just made hearts.

The dough should be only about an eighth of an inch thick, but I'm terrible at estimating stuff like that and always wind up with thicker cookies than I should. Oh well. They still looked okay on the sheet. 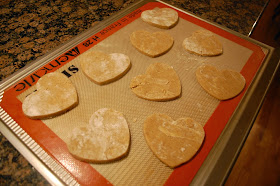 ... And came out of the oven looking okay, too! The recipe warns that these burn easily, so you should watch them carefully while they bake. They're supposed to cook at 350 degrees for about eight to ten minutes. 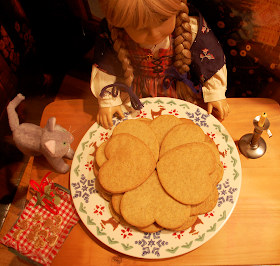 Again my cookies came out a little thicker than they probably should be to be wholly authentic. Swedish folklore and custom dictates that during the holidays, put a pepparkakor in your hand, make a wish, and tap the center. If the cookie breaks into three pieces, your wish will come true. My cookies definitely were not thin enough to shatter like that, unless you were taking a hammer to them (and your hand!), but they were still thin and crisp and very delicious. They weren't quite as spicy as some commercially made pepparkakor I've had over the years, so I wonder if this recipe was intentionally toned down a little to make it more appealing to kids. I don't see why, though, as I've loved spicy cookies since I was a kid.

Despite that, I will go on the record as saying these things were dangerously tasty. I tried to calm down and only eat one or two at a time since they were big cookies, but they were so good I kept going back for another, and then another. They were spicy and flavorful without being overpowering, but still left your mouth feeling kind of fresh and clean after you'd finished eating them, with a nice, spicy aftertaste that lingered for quite a while after you'd had them.

One other thing I really loved about these cookies was how flat they are, which means they're really easy to stack! This isn't exactly something that has to go along with pepparkakor, but colonial cookies often are meant to be displayed in beautiful tiered stacks, and most of the recipes I've made from that period have come out a little lumpy or bumpy, and are thus difficult to make into an artfully arranged pyramid of cookies. These baked evenly enough that you can almost put them right on top of the other like a factory made cookie, and thus they were easy to store, too! I just really can't say enough about how much I enjoyed these, even if there were parts of the process that were a little frustrating. If you know what to expect going in, you're going to wind up with a seriously tasty cookie that will vanish from your house in a heartbeat. 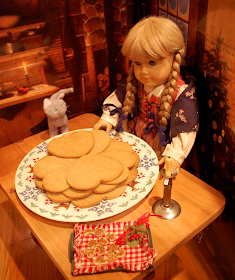