A surprise discovery that turned out to be an old family favorite! ... For some.

Continuing my adventures in making authentic, historical recipes, we decided to head backwards in time to the Great Depression, partially because Kit Kittredge has officially joined my rapidly expanding collection, but also because I found a neat little cache of recipes that I thought could be fun to try out.

Depression era food is probably just as difficult to sell to people as 40's wartime food, and 70's casseroles that sound like someone effectively dumped the contents of a pantry into a dish and hoped for the best. I know a lot of people make faces when I mention it's something I'm interested in, and I'm pretty sure it would be a hard sell to get certain friends and family members over for similar dishes. That being said, I've been enjoying the results, and I think some of the mystique and terror associated with cooking during these two eras has started to dissipate.

I'm sure some of my taste testers will protest that fact, but what can I say? Maybe I'm learning to overcome my picky eating habits. I found this set of recipes thanks to a website I never thought to look for recipes on, or even read like... ever. Business Insider ran a piece on 11 Depression Era recipes all provided by a woman who would have been around Kit's age during the Depression, and I found myself intrigued by a lot of the dishes presented there. I then discovered she has her own YouTube channel! You'll probably see this channel mentioned again in later Kit posts! The Italian ice recipe sounds particularly interesting. It's a good read, and I'd definitely recommend checking it out if you want to get some interesting

I'm not sure what drew me to this recipe the most out of the others listed. Maybe it was the fact that it sounded pretty easy to do, and as you guys know, I'm always eager to work with something that isn't going to take six hours and a million ingredients to make, especially now that I'm working. I also feel kind of guilty for featuring so many desserts, because while they're fun and definitely easier to get excited about eating than anything featuring asparagus, I didn't really start this blog looking to become an expert pastry artist or cake baker. I wanted to learn how to make actual meals! And this looked like something that might come in handy to know later on in life - something inexpensive, filling and pretty easy to throw together in a pinch.

You start off by cutting up a potato and an onion. These get tossed in a sauce pan with olive oil until both the onions and potatoes are tender. 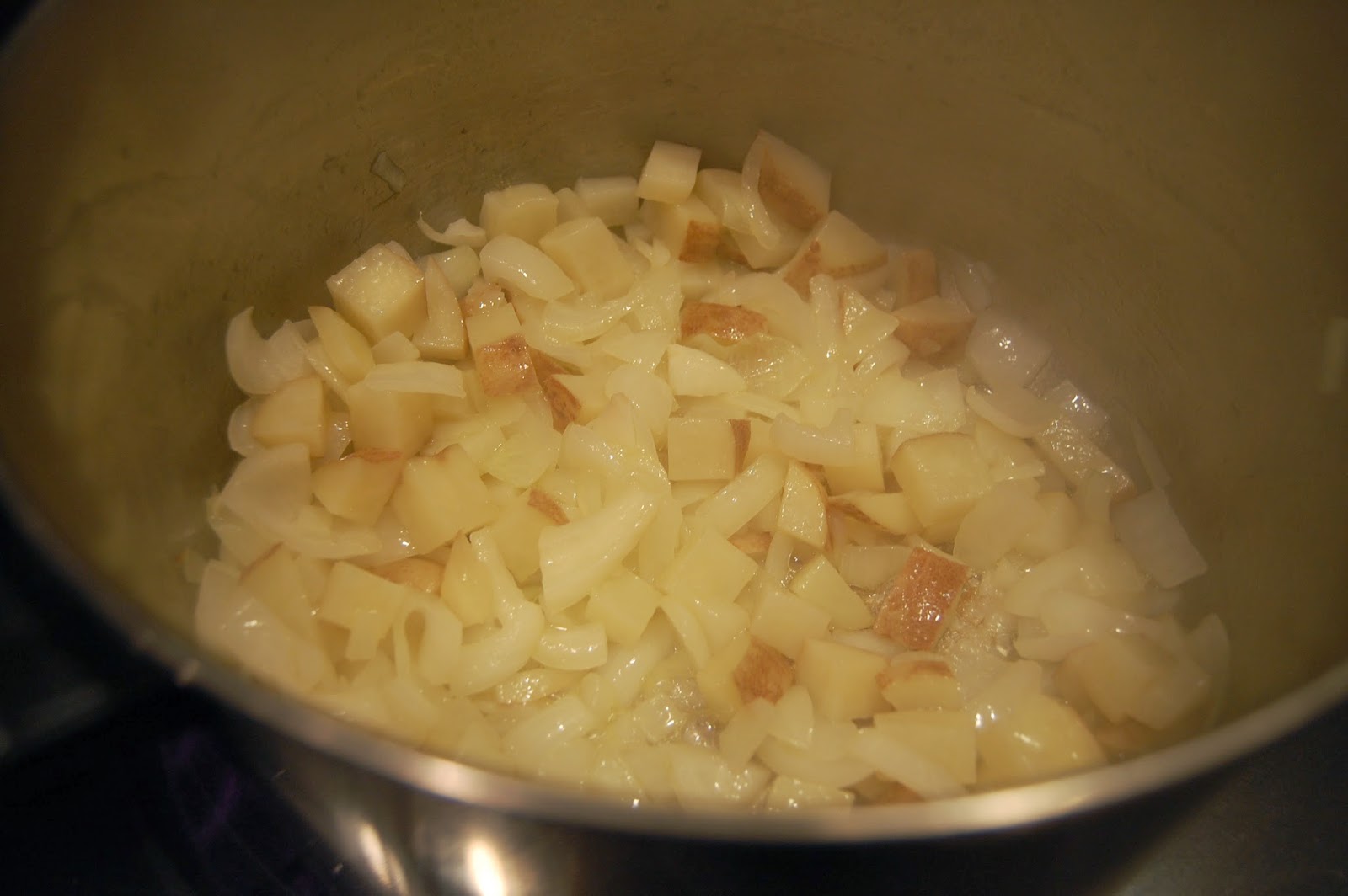 Then you add canned peas and pasta. I drained the liquid from the peas before putting them in, and we used ditalini for the pasta. It looks like the pasta used in the original recipe, and is also what my great grandma used in her variation.

After you mix them together, you have two options: leave the stove on, or turn it off and leave the pan on the burner with the lid over it, allowing the heat and steam cook the pasta. The former probably would cook it quicker, but the later is more accurate to the period. As Clara explains, to save gas, you would often let dishes cook this way, so that's what we decided to go with. 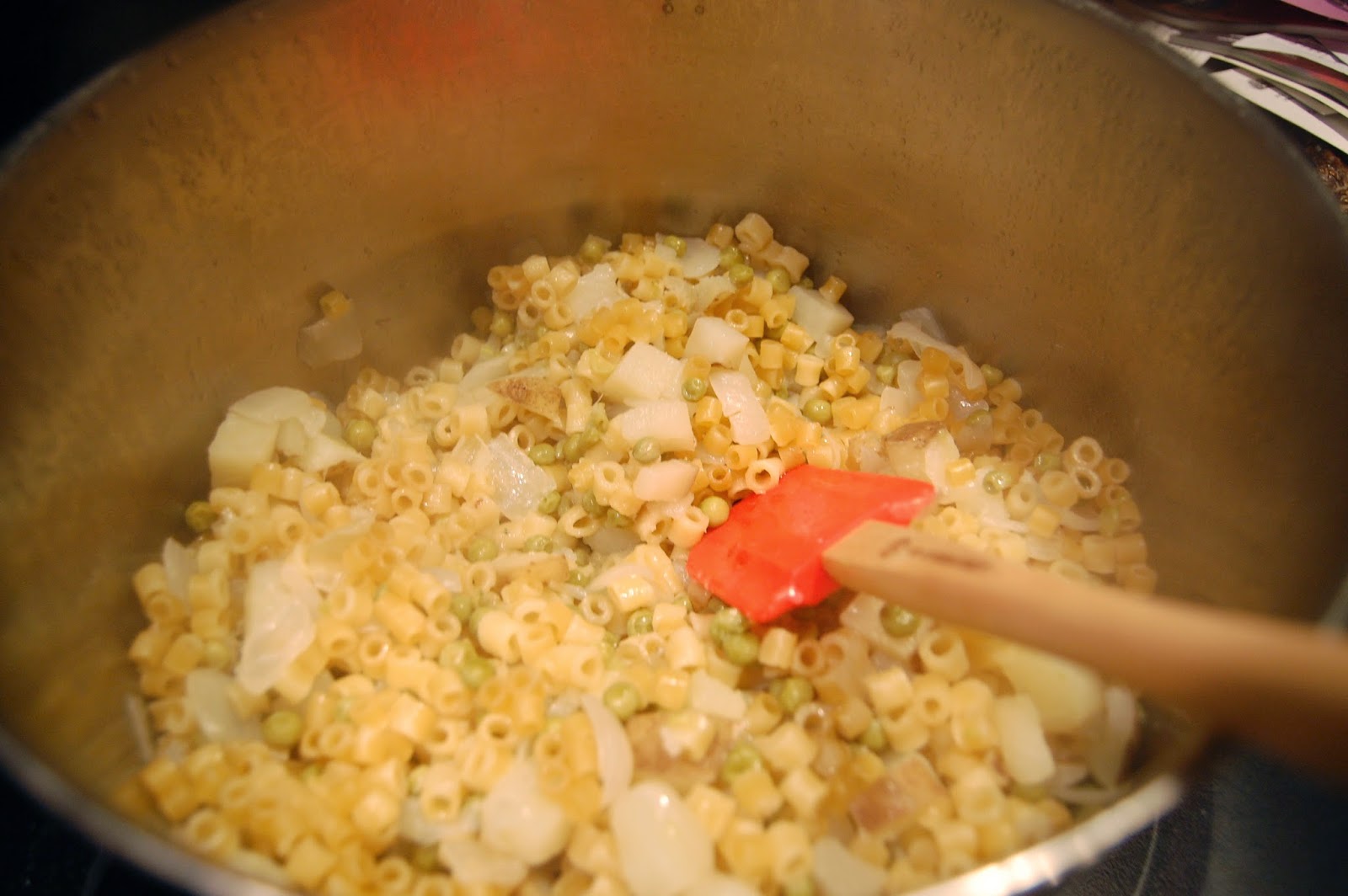 I'm not sure if there just wasn't enough liquid in the pot or what, but some of the pasta on top didn't quite cook all the way through, but that was the only disappointment from cooking it this way. It wasn't exactly warm by the time it was ready to eat, but fortunately we live in a time period where the microwave makes short work of that.

I wasn't sure if the tomato sauce was supposed to go in all at once, or get doled out on top after it was plated, so into the pot it went. 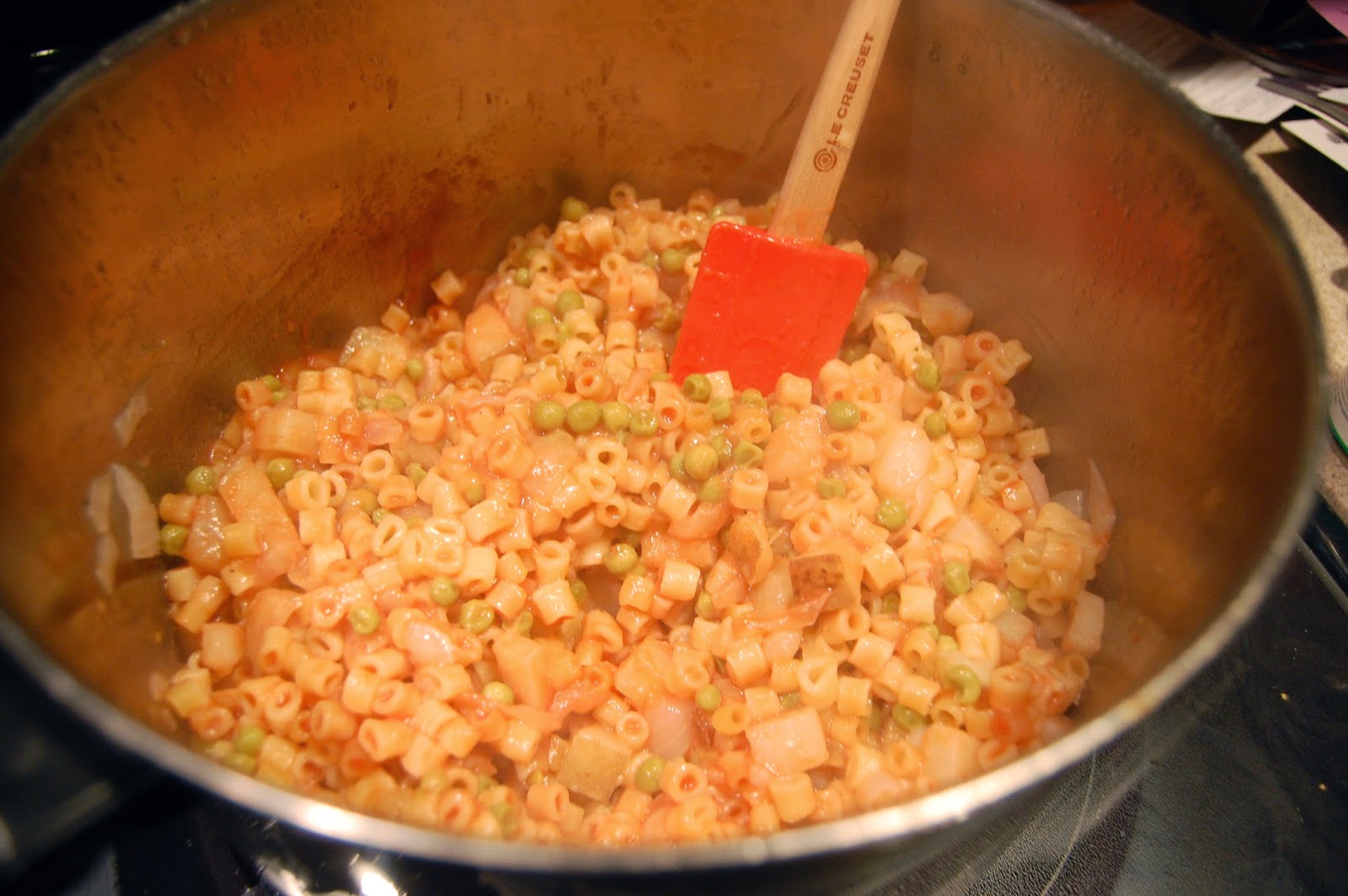 You finish off the dish with Parmesan cheese! The whole thing took about half an hour or forty minutes to make, and most of that was just letting it sit on the stove. Pretty hassle free, all told. So, how did it taste?

Not two seconds after putting his first forkful in his mouth, my dad - while making a face of abject horror - uttered his succinct review of the dish: "Wow, the Depression sucked."

My thoughts were a little more positive. Not unlike the smothered sausages, this dish was a little bland even with the cheese on top, and I think it's something that could easily be spiced up or tweaked a little to make something genuinely delicious. But I don't know, I really didn't think it was all that bad. I might not pick it out if I went out to dinner and it was on the menu, but I'd eat it again if someone made it for me, or if I needed a dish that's a little more vegetable heavy.

That's the other thing: it's not really a great dish to have totally by itself, because there isn't much protein in it at all. If you're planning on making this for dinner, I'd maybe try to find something else to have with it to make sure you're not going to be hungry again in an hour.

Still, I liked it alright! It definitely wasn't enough to get me to stop being interested in authentic Depression era recipes, and I'm looking forward to our next adventure there, even if I think my parents wouldn't mind pit stopping back during an era that's better known for it's delicious dishes, and not for the various ways a potato can help stretch a meal to feed more people. Because yes, the Depression did suck.
Posted by Gwen at 6:21 PM