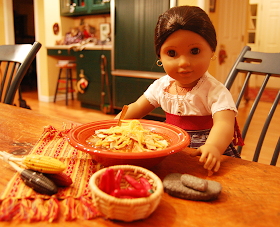 Whoever invented tortilla soup was a genius.

I think a lot of people are really intimidated by the idea of making their own soup - I know I sure was! Since it's so easy to just open up a can of soup and let the factory and your stove or microwave do the rest of the work for you, I definitely get how people might think making a soup is more complicated than it actually is. While I hope I've showed you guys that making soup is actually pretty easy, it does usually end up taking a long time to taste good.

This has become more of an issue for me than it had been in the past. Now that I have a full time job, and hopefully will continue to for quite some time, I've got much less time to cook than I did when I was unemployed and sadly poking at job websites trying to find someone to hire me. This means while I still like trying out new, exciting, complicated things, an easy recipe that doesn't take too much time to make is a nice thing to be able to throw together on a day where I'm already tired from work, and it's even better when it turns out to be something very tasty, filling and good for you! This hit all those notes, and was tasty enough that I would definitely make it again, and would highly recommend giving a try yourself if you're ever in the mood for something a little different than microwavable soup. 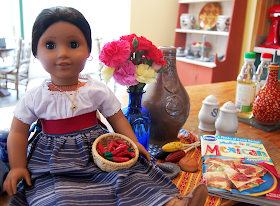 Tortilla soups are a staple of Mexican cuisine, and have been for a very long time. They've been around for so long that no one's actually sure where they came from, or who was the first person to think gee, this might be a tasty idea! Most people assume it comes from Mexico City, but when and how have been lost to the sands of time.

There are hundreds - maybe even thousands - of varieties of this soup. My mom and sister's favorite is the sopa Azteca at the San Angel Inn in Disney World, and after giving this a try, I have to admit, I'm curious to see if any of our Disney cookbooks include a recipe for that. Tortilla soups can be anything from a light chicken soup to a much more hearty version with beans and other vegetables thrown in, and our version is - for the most part - vegetarian.

You start with a large tomato which you roast in a skillet until the skin is blistered and charred. Mine didn't turn out super roasted looking - it was an oddly pumpkin shaped tomato, and I'm not sure it really got the texture or flavor we were looking for. You can always use a canned roasted tomato if you're feeling less adventurous and hands on.

Chop up an onion and two cloves of garlic, and then toss these with the chopped tomato into a large sauce pan. You're going to want to cook them on medium heat for about three minutes, and definitely stir them around a little to make sure they're cooking evenly. 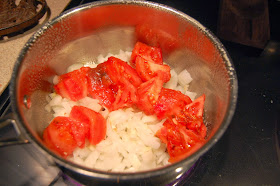 Next comes the beans. You want fifteen ounce cans of navy beans, black beans (both of which should be drained, cleaned and rinsed) and chili beans, which basically means more beans that have already been cooked in a spicy sauce. You pour in the whole can of chili beans, and then add about fourteen ounces of chicken stock to help beef up and dilute the broth a little. I'd imagine if you wanted to go full vegetarian, you could substitute for a vegetable broth pretty easily, as the chicken stock didn't add too much flavor to the dish overall. This is definitely more of a bean soup than a chicken soup.

This is also the stage you'd be adding any meat you might want to include. I'm definitely curious to try this with chicken or beef at some point, but quasi vegetarian was the way we decided to go tonight.

Mix everything together, bring it to a boil, and then reduce the heat and let it simmer for about fifteen to twenty minutes. 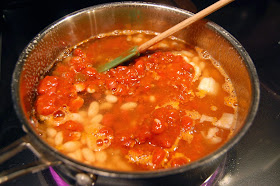 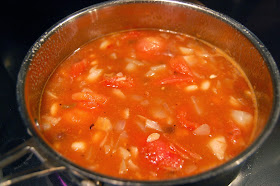 While it simmers, take four corn tortillas and slice them into thin strips. Place them on a baking sheet

Traditionally, these tortilla strips are fried in oil, but since we were looking for a healthier version of this dish, baking them is the healthier option. They browned up nicely in the oven at 425 degrees, but there were still a few that looked pretty doughy. Mine were also a little too long and maybe a little too thick, so I ended up snapping them in half to make strips that were easier to eat without choking or looking like a doofus.

Grate some cheddar cheese (or use some pre-grated cheese), arrange it and the tortilla strips on top of the soup, and you're good to go! 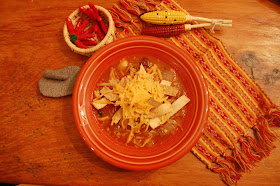 You guys already know I liked this soup - it's not like I've been shy about telling you when I haven't liked something I've made - but I do think there are some ways to improve on it, too. While it had nice flavor, it was a little bland for me. My family tends to like pretty spicy foods, and this dish definitely could have used a little more of a kick to me. That said, if you're more of a cautious food fan who's often wary of authentic Mexican food, this might be perfect for you!

One thing I'm excited about is how easy it would be to tweak this recipe for different audiences, or even if you're just in the mood to try something different! Customizing the spices, protein sources and going all out with the richer ingredients means it's super easy to get an entirely different, very tasty soup with as much effort as you're willing to put in, which is always a nice thing. Sticking to the recipe is good and all, but being able to go a little off book is always an adventure, and it's nice to know that's still an option even if I don't have as much time to cook as I used to. 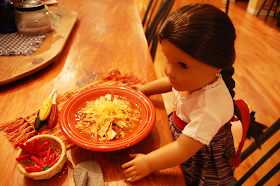