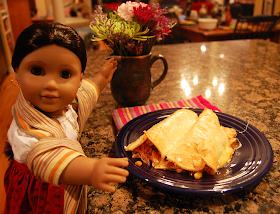 Now I know I owe you guys an Ivy feature, and I promise I'm working on it. We have a (hopefully) really good recipe planned, but are hitting a snag in being able to find dumpling wrappers, since apparently our local supermarkets have severely downsized their Asian section. This means we need to head down to the big ("big") city on an expedition to an Asian market, and unfortunately, that meant we needed to reshuffle our schedule of upcoming recipes a little.

But honestly, I'm not too bothered. We would have had to head down there anyway to get an ingredient for another treat I'm hoping to feature at the end of the month. What is it? You'll just have to wait and see!

In the meantime, we're going to be doing a feature with the stowaway we picked up from our recent trip to American Girl Place New York! Her identity isn't much of a surprise - the header image and title of the post definitely give it away... - but I'm still very excited to reintroduce you guys to... 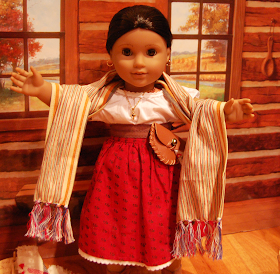 María Josefina Montoya! More commonly known as just Josefina, and no, it's not Joe-seh-fee-nah, it's Ho-seh-fee-nah. While I do get kind of judgmental about people pronouncing Kirsten's name Kur-stin and not Keer-stin, I have to admit, my mom needed to correct me when I was younger and just assuming that because her name was spelled with a "J" that the "J" had to be pronounced, so if a kid says it wrong, I cringe a little less then when people call Kirsten Kristen. She was the first American Girl released after I got interested in the company, and I remember it was a huge deal to see a new historical character with all her awesome new accessories. My grandmother got my sister and I a boxed set of her books pretty soon after they came out, and I remember going through the catalog over and over and over again fantasizing about one day owning her bread oven, her school lunch set, her party treats and her memory box.

(I have always had a thing for small food.)

Josefina is from New Mexico before it was a part of the United States, and her stories start in later summer 1824. She's an adorable character who stands in contrast to a lot of the other American Girl not only because she's from a unique culture that thus far has no crossover with any other historical AG character, but also because she's very shy and not much of a risk taker. She's also the only historical character to aspire to be a doctor - or more specifically, a curandera, a healer - and I've always been a little disappointed that her collection doesn't have something catering towards that. 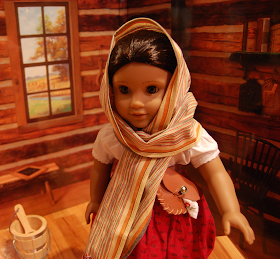 I'm honestly not really sure what inspired me to pick this particular dish to feature as my Josefina's first official post on the blog (I was borrowing a friend's Josefina for the beef mole tamale pie). My aunt made these really fantastic enchiladas about a year or so ago that convinced me they might be one of my favorite things ever - which I admittedly say about a lot of tasty food - so I guess I was inspired to try my hand at making them myself. Enchiladas are a Mexican dish that date back at least to Mayan times, and have grown and evolved a lot between time and location.

I decided to try my hand at this Tyler Florence recipe for Chicken Enchiladas from Food Network.com, mostly because it was very highly rated by other users who had tried it, and also because it was allegedly an easy recipe that wouldn't take too long to make. Both of these facts made me feel pretty confident that this was something I could do without becoming too frustrated, so I went into this with relatively high hopes.

As it turned out, I might have been a little too confident.

Your first step is to cook your chicken in a saute pan with salt, pepper, garlic powder, cumin and a Mexican spice blend. This turned out more or less fine, although it took forever for the breasts we had to cook, and some of them turned out a little burned on one side because the centers just wouldn't cook through.

My mom was acting as my sous chef and was one of my taste testers, and she thinks if we were to make this again, it might make more sense to poach the chicken instead of sauteing it, because the chicken did turn out to be a little dry.

The onions and garlic go into the pan with the chicken drippings, and once they're cooked, you add in the corn, chiles and tomatoes. For some reason the recipe called for whole green chiles and never said to actually chop them up, but we chopped ours up anyway because it didn't make any sense to just have giant chiles floating around in every other enchilada, while others had no chiles at all. This is also a step you can easily tweak a little depending on how much spice you want in your enchiladas - for example, we were a little cautious about how many chipotle peppers we put in because my grandmother really doesn't like spicy food much.

Also, our chipotle peppers were frozen, so that's why they look kind of... weird. 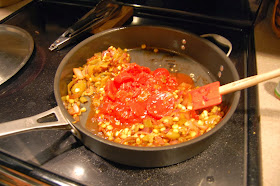 Once you pull your chicken breasts apart - you were supposed to hand shred them, but considering ours were still pretty hot, we just used a fork - you put them in the pan with everything else, stir, and then dust the top with flour to help the filling set a little.

This was where we hit our only real snag in making this dish: in our rush to get out of Stop & Shop, my mom and I grabbed two cans of green enchilada sauce, and didn't realize this until literally right before we were going to put the sauce in the pan. My dad had to do an emergency run to the grocery store to get replacements, so I'm going to take a minute to say thanks to him for covering for us and for my grandparents for being so patient as making dinner started to take way longer than we thought it was going to.

Anyway, you put some enchilada sauce on the bottom of both pans, and put the rest in a shallow bowl. After microwaving the tortillas - this makes them a little easier to work with, and fair warning, corn tortillas are a pain to work with even after you did this - you dip them in the sauce, put in a quarter cup of the filling, roll it up and place it seam side down in the pan. 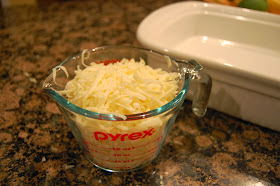 I found the first few tortillas we worked with folded up pretty nicely and had very limited tearing, while the last half or so we handled were super fragile and ripped open pretty badly. We were left with one dish that looked pretty nice... 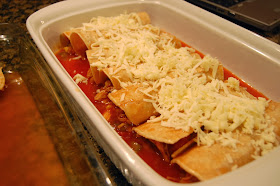 And one that looked. Pretty homely. 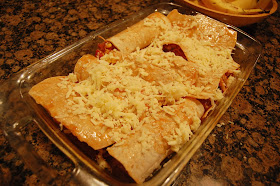 The cheese is hiding a multitude of sins.

These were both popped in the oven for fifteen minutes with Jack and cheddar cheese shredded on top, and came out again looking... 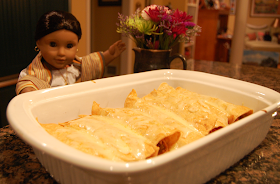 Perfect! Well, okay, this pan looked great, the other one was still sort of a mess. Corn tortillas are not super fun to work with.

I wondered if it might have had something to do with them getting cooler after taking them out of the microwave, and next time I use them, I might experiment with that a little bit to see if it helps them keep their shape a little better.

The recipe gives a lot of suggestions for what to top your enchiladas with, and this is what we had on the table for people if they wanted it: 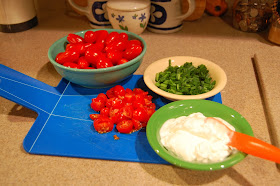 But I honestly liked mine plain the best. 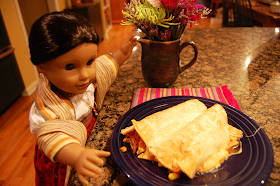 Melted cheese is all the topping I ever need.

So, my overall thoughts on this recipe?

I'll admit it - I'm kind of a lazy cook. A dish could taste absolutely incredible, and I'd still be reluctant to make it again if it took a lot of effort to prepare, especially for a larger group of people. Because of that, this wasn't one of my favorite meals to cook because it required a lot of prep time, and it left me with a lot of respect for people who are able to churn these out in restaurant kitchens without skimping on quality or flavor. Not that I didn't have respect for them before, but there's something about cooking your own food that makes you really appreciate how much effort goes into making this on a large scale, especially when some of the people you're cooking for aren't going to be as nice and appreciative as say, your very supportive family.

Because this dinner ended up taking a lot longer than it advertised it would - although I know the biggest time sink was replacing the sauce, so it's not exactly the recipe's fault  for that - I have to admit I'd be pretty reluctant to make this again compared to say, the shepherd's pie or the barley soup I've made. If you have someone in the kitchen helping you out, it does go by faster, and cutting back the recipe might help make this more manageable for a smaller group. I definitely don't think I would have made it to the end if I didn't have my mom lending a hand! Then again, I'd also feel a little stressed making this for a big group because there's a good chance your tortillas are going to look like they were attacked by a polar bear before they made it to the table, so I'm a little on the fence about the prep process.

That said, these were incredibly tasty, and I was definitely encouraged by my taste testers to give this another shot. I'd encourage you to, too, but would caution that the first time around, this might take a little longer than you'd expect it to from the recipe info on the website. Once you find a better rhythm, you might be able to cut down on cooking time, but it took me about half an hour longer than predicted to finish this, not including the emergency trip to the grocery store. Still, a tasty dinner is a good reward, especially when things during preparation get a little shaky, so I really can't totally write this one off! 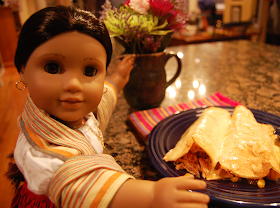 Now to come up with something to make with the green enchilada sauce...
Gwen at 6:36 PM
Share