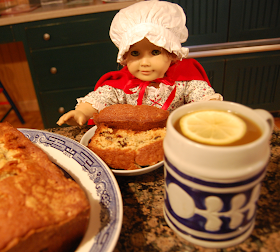 A tasty tea bread and hot apple cider to keep warm during any other polar vortexes!

It probably won't come as a surprise to most of you when I say I'm a pretty nostalgic sort of person. I mean, this blog is pretty much all about my affection for American Girl dolls, something I was introduced to at age five and have pretty much always loved, even with all their various flaws. I've really enjoyed reminiscing with friends about their favorite characters and which books they liked best, or what hairstyle horrors they accidentally put their dolls through, and it's been a lot of fun for me to get both new and old fans thinking about what kind of food their favorite characters would have enjoyed.

Today I had the pleasure of having an old friend over the house for a late lunch, and since Felicity was her childhood doll, I went around trying to find a good recipe to go with the beef pasties. I ended up finding an archive of a lot of interesting recipes that I'm definitely keeping on file for future post ideas, and I'm very excited to share it with you guys. 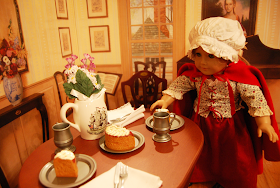 So fun fact: colonial people didn't eat lunch. Their midday meal was called dinner, and was usually the heaviest meal of the day, while their later meal - supper - was usually much lighter, and might even just be leftovers from dinner. This makes it kind of difficult to find colonial lunch recipe ideas because there just aren't any, although some tea treats could definitely be considered a lighter midday meal. While I knew I wanted to make the pasty the main course, I wanted something new and really colonial to make for my friend, so I started investigating tea treats.

There are a lot of great resources out there for recipe ideas like this, but I was very enthusiastic to find a list of colonial recipes from the Gaspee Days Committee pretty quickly in the course of my search! I had never heard of Gaspee Days until about a year ago, and I would bet there are a fair amount of my readers who haven't heard of it either.

Basically, the Gaspee Affair (or Incident, depending on who's talking about it) was a significant event in the lead up to the American Revolution, which is often overshadowed by the Boston Tea Party, much to the chagrin of the people of Warwick, Rhode Island. On June 9th, 1772, the HMS Gaspee ran aground at what is now known as Gaspee Point. The ship was enforcing the highly unpopular Navigation Acts, and so when the local townspeople heard about what had happened, a group of men boarded, ransacked and torched the ship. To commemorate the occasion, the people of Warwick host "Gaspee Days", a festival that celebrates the history of the event with a parade, historic reenactors, and other fun events. Last year my family was in Providence for a few days during the same weekend as Gaspee Days and got to see the parade and participate in some of the events. It was a lot of fun, and I was excited to find this archive of recipes used during past celebrations of the event.

I picked the Providence Cake and Spiced Cider Punch because both sounded fairly stress free while also being fairly authentic. I'm not sure why the cake is called a Providence Cake, as I've never heard of one before discovering this recipe, but I'm assuming it has to do with Providence, Rhode Island versus providence the concept. 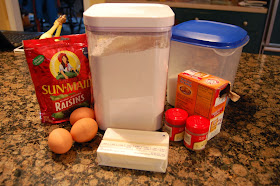 It's got a pretty standard set of ingredients for a cake, and requires separating the dry and wet ingredients just like every other cake I've ever made. 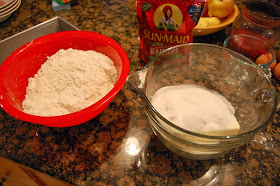 I originally wanted to use the mixing bowl with the spout to make pouring it into the pan easier, but it turned out that wasn't going to happen. That said, I'm glad I did it because the higher sides of the clear mixing bowl help cut down on the splatter from the mixer by a pretty incredible amount, so while it meant more dishes to clean, it did help cut down on the mess a little bit.

It was pointed out to me a long time ago that if I hadn't wanted my blackberries to all sink to the bottom of my cake in my chocolate blackberry cake post that I should have coated them in flour first before adding them. I wish the recipe had said something about that, because I really think the pile of soggy seeds on the bottom of the bowl kind of interfered with my ability to enjoy the dish. This recipe was a lot clearer in saying that the raisins had to be mixed in the flour and added at the same time as it was to help the distribution, and I have to say it turned out really well in the finished dish.

Admittedly, whole blackberries are a lot more fragile than raisins and wouldn't hold up to the same kind of mixing action, but it still would have been a nice thing to know about! 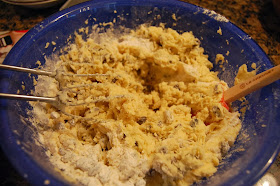 Now, the recipe doesn't actually tell you when you need to put the half pint of milk in, which is a major pet peeve of mine. While it's true that all the ingredients are going to end up in the same place eventually, it's still helpful to try and make sure you're putting the right things in at the right time

Fortunately, I thought to Google it and discovered it was supposed to go in after you'd blended all the flour and raisins in. I say fortunately because as the flour got combined, the batter was way more like a dough, and would have resulted in a really, really rock solid cake if the milk hadn't been added.

Once it was included, the batter was much more cake-like and was very easy to work with. I actually had enough left over to make two decent sized cakes. 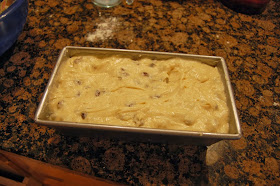 While the cake baked, I got the cider ready. It's a really easy recipe to make and one you can do pretty much at your own pace, because the longer the spices sit in the cider, the more flavorful it will get.

The recipe originally called for a full gallon of apple cider with the intent to serve 25 people, but I cut it down a fair bit since there was only going to be two of us drinking it. I also got to use some of the cinnamon sticks from my spice box!

Seriously, it's a really simple recipe, and was a lot faster to make and have ready to go than the cake. 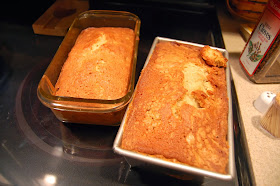 This is definitely more of a tea bread than a birthday cake. The center is really moist and tasty - the spices add a really nice kick! - and the crust has a really crunchy, thick coat. It's actually pretty hard to cut through with just a butter knife, but it's not unpleasantly hard in my opinion. If that's not really your scene, it's very easy to peel off or cut away, and you're still left with a very decent sized piece of cake.

The cider was similarly tasty, and the lemon and orange slices really gave it a nice extra flavor that most of the spiced ciders I've tasted were lasting. It was good hot or cold, although I prefer my spiced cider warmer than room temperature.

(And for the record, the fruit slices are more for decoration than eating at this point, I just left one in my mug for the pictures.) Overall, I feel pretty confident in calling both of these expeditions a success. The cake is a nice option for either a dessert or just something to nibble on with tea or lunch, and the cider is exactly what I've been in the mood for during the last few chilly days.

It's almost too bad there are only so many hours in a day and days in a month, because I'd really like to try out more of the recipes featured in that little archive. I might have to pass it along to a few of my friends at the local historic society too for the next time they have a function! 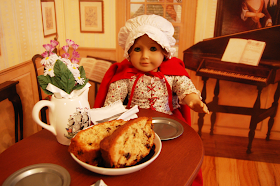 And get on down to Warwick, RI this summer if you're in the mood to learn more about the Gaspee!
Gwen at 5:33 PM
Share