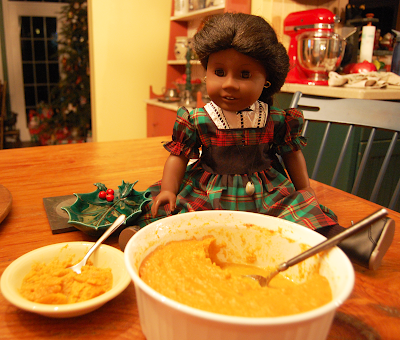 A super tasty historic dish that you've definitely got to try!

Next up on our holiday adventure is Addy! Like most of the other original (or at least, pre-2011) historicals, Addy has a well defined holiday story and an easily identified dish to prepare, and I have to say, hers was the one I was most curious to try.

I don't make puddings often unless it's the kind from a box, and the last pudding I made wasn't exactly tasty. I was also curious to see if it would taste anything like the sweet potato pies I made a few weeks ago, and I was pleasantly surprised to find out that not only was this not a terrible failure, but also was incredibly tasty without just tasting like the pie without a crust. I'd definitely recommend giving it a shot if you're looking for something super tasty that doesn't often make its way onto modern tables or menus, and it's easy enough to make that I feel very confident in saying this is an official American Girl recipe that's a real winner. 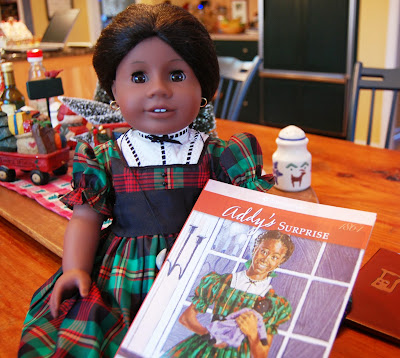 Sweet potato pudding is featured fairly prominently in Addy's Surprise, the third book in Addy's series. My childhood copies of Addy's series actually belonged to the library, so my personal editions are all from the newest line of books available. I'm glad she at least got to keep the second edition cover art, since the new books not all having matching covers is something that bums me out a little bit, but her updated illustrations unfortunately aren't as nice as the originals.

An unfortunate amount of Addy's collection has been retired over the years, so I don't exactly have much by way of props from her holiday story, but I do have what is - in my opinion - the most important one. 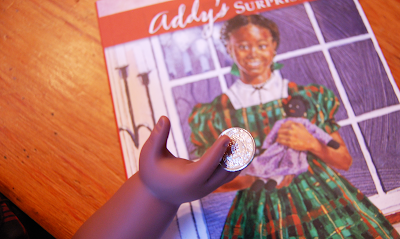 Addy's half dime comes from her accessory set, and is given to her by Uncle Solomon before she and her mother make their escape to freedom. He tells her to spend it on something important, and while Addy initially plans on using it and half of what money she earns from doing deliveries for her mother's employer to buy her mother a new scarf, she changes her mind after hearing her pastor encouraging people to give everything they could to help newly freed slaves trying to start their new lives in freedom. Addy remembers the kindness she received from people like her friend Sarah Moore and her mother when she first arrived in Philadelphia, and ultimately decides to give all her money including her half dime to help those trying to start a new life.

I'm really glad American Girl decided to include a story like this to their line up, as most of the holiday stories involve the girls dealing with problems with their family members and traditions changing, rather than finding ways to give back to their community during a season that traditionally encourages people to help out those less fortunate than them. Obviously other books focus on this - Kit's series in particular touches on these issues a lot, and Rebecca and Samantha both have their forays into social justice and community service - but as finding ways to give back during the holidays (and other parts of the year) has been a part of my family's holiday traditions for as long as I can remember, I enjoy that there's a holiday book with a focus on it.

My favorite organization to support has always been Toys for Tots. Founded in 1947, it was founded by the United States Marine Corps Reserve after Major Bill Hendrick's wife wanted to donate a handmade toy to a child in need, but could find no official organization to do so. Major Hendricks (who also happened to be the PR director for Warner Brothers) and other marines organized collection bins outside Warner Brother's movie studios, and after the first year was so successful, they enlisted celebrity support to promote the campaign. A fun fact I didn't know until I researched the history of the organization for this post: Walt Disney Studios designed the red train logo! The organization has since expanded so other groups can help set up collection bins in areas where no USMCR members were present, and received endorsement from Michelle Obama in 2009. It's a great organization, and if you've got room in your budget for it, I'd definitely vote for supporting it however you can. 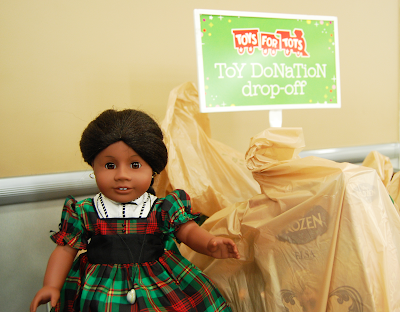 Addy even came Toys for Tots shopping with us this year!

Anyway, on to the recipe. Like Felicity, Addy originally had a set that allowed kids and their parents to recreate one of the special dishes her family enjoyed for Christmas, rather than having a plastic model of the food like Kirsten, Josefina or Kit. Addy's was sweet potato pudding, and the set came with a doll sized cast iron skillet you could actually cook with, a ceramic bowl, wooden spoon, sprig of holly and two different recipes for making the pudding. 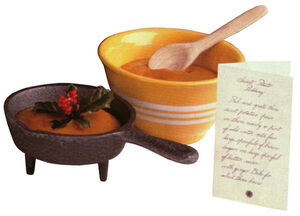 Image courtesy of the AG Wiki

Despite not having my hands on the recipe, I was able to find it online. The "handwritten" recipe is much more inexact with measurements, and since I hadn't made this before, I decided I should start off with the modern version and then maybe try the original once I knew what this was supposed to taste like.


Unsurprisingly, the first thing to do is clean and cook your sweet potatoes. I chopped them up a little to help them cook faster, and though my mom wondered if baking them rather than boiling would help them keep their flavor, I think boiling them worked out fine. Still, it might be an interesting option if you're interested in trying it. 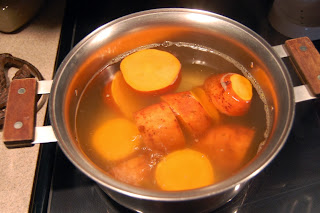 Once they're finished, peeling the skins off is really easy, even without a peeler. The recipe says to mash them up with a fork, but mine were a little tougher than they probably should have been. A potato masher or something similar will definitely help if you're struggling with the fork a little. 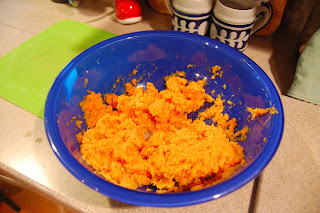 The next step was probably the trickiest. Combining the butter and sugar with a mixer is sort of complicated when the butter keeps trying to shoot out of the bowl even on the lowest setting and you don't have a mixing bowl with higher sides available.

But once that's done, mixing it in with the potatoes is pretty simple. The butter might melt a little if the potatoes are still warm, but this didn't seem to do anything bad to the pudding. If anything, I'm pretty sure it helped spread the flavor more evenly through the potatoes, which is definitely a good thing because I could see this dish becoming more like a side dish than a dessert pretty easily if the sweeter flavors aren't really worked in.

Next comes an egg, vanilla and milk! Again, pretty self explanatory, and the pudding gets a nice, thick texture when it's all mixed together. 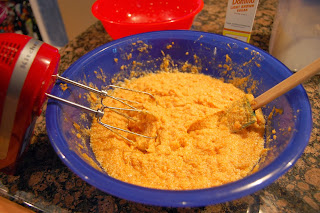 I forgot to take a picture of the nutmeg when I first put it in the mixture, but luckily I realized my mistake before it got fully incorporated, just in case you didn't believe I remembered to put it in: 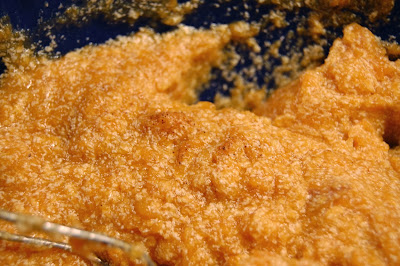 See! It's in there somewhere.

After greasing a casserole dish, you are pretty much ready to go! Fortunately (sort of), the amount of butter you need for the recipe leaves a weird amount left over - not quite two tablespoons, but not really enough to cook anything else either, so you can use this to help grease the dish if you don't want to use cooking spray or shortening or anything like that. 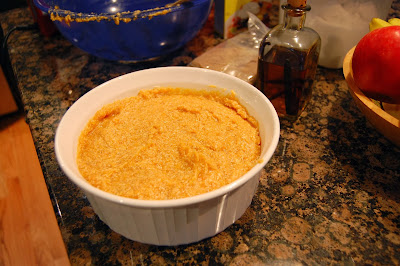 Mine came out fine after fifty minutes, with some nice carmelization on the sides and a little on the top. 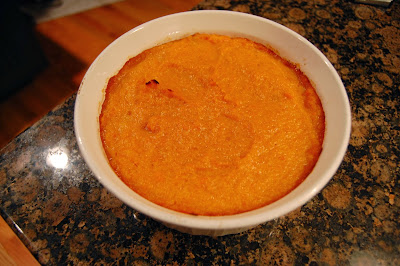 I was super excited to try it, but the recipe says you're supposed to let it cool before you bite into it. Obviously this is the worst part of cooking, and needless to say I sort of impatiently hovered around the kitchen until it wasn't going to set my mouth on fire. 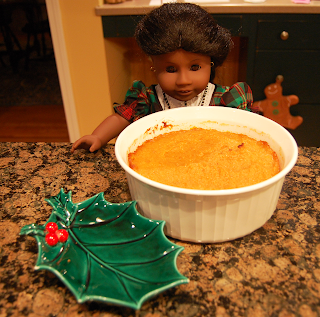 As I said above, I really couldn't be more pleased with how this ended up turning out. It had a really nice texture, not at all similar to the weird, spongey consistency of the pumpkin pudding we made, and not really similar to the sweet potato pie, either. This was more similar to a mashed sweet potato with a little more body to it, and man, it was good. I don't love sweet potatoes, but this was sweet and had a great hint of vanilla that really made it a dessert, not a side dish. Since this is a recipe that doesn't involve too much knife work or meddling with the stove, I also think it would be totally feasible for a younger chef to take point while an adult helped out with the stove work.

I can also attest that it tastes good hot, cold or room temperature, and makes a pretty decent portion if you need to feed a lot of people. This was definitely a winner, and now that I know what it's supposed to taste like, I'm definitely interested to try out the handwritten recipe included in the kit and see what differences pop up. 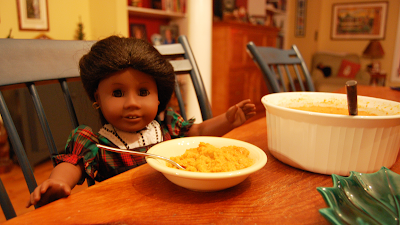 Thanks for indulging my rambles about Addy's Surprise and Toys for Tots!
Posted by Gwen at 6:15 PM