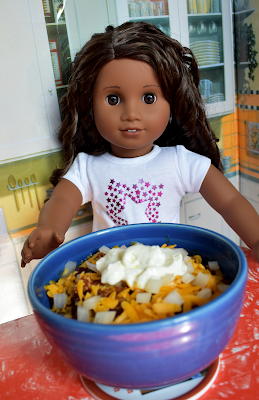 An unusual but tasty spin on chili!

Our final entry in our Black History Month series comes from the personal archive of the Obamas! To share it with you, I brought out Gabriela McBride, AG's first Black Girl of the Year character. Gabby runs for student body president in her third book, so besides being a modern girl who would have grown up during the Obama administration and probably been incredibly excited to see girls like her living in the White House, she felt like a good fit to share this unique but tasty recipe for one of my personal favorite foods. Read on to see what's for dinner with Barack and Michelle! 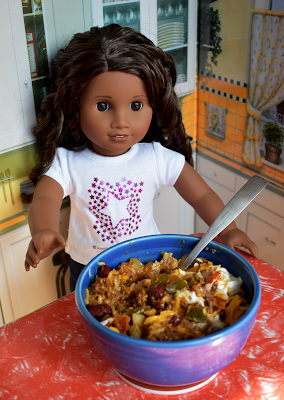 Everyone has their opinions about what makes a good chili, and Barack Obama is no different. As I've discussed before, Americans have almost always been fascinated by what food our presidents or presidential hopefuls might be eating. It's an easy way to build a rapport with the public, making them feel more human and "just like us!", and it's often been a way for people to feel just as fashion forward as the families living in the White House.

During the 2008 campaign season, several different media outlets published Barack Obama and John McCain's personal favorite recipes. McCain's was a recipe for barbecue ribs, saying barbecuing for guests was one of his favorite ways to relax. Obama's recipe was his personal recipe for chili that he says he's been making since college. He warned readers that he wasn't revealing all the secrets, but "if you make it right, it's just got the right amount of bite, the right amount of oomph in it, and it will clear your sinuses."

Chili is one of my favorite go to meals, so of course I was interested to see how this would turn out. It's also not the first presidential chili I've ever sampled, although Lyndon Johnson's doesn't include beans, and I'm a bean chili girl, so Obama's recipe already had that going for it. But one of the coolest things about chili, in my opinion, is how different my vision of a good chili might be from yours, and there were frankly a few eyebrow raising ingredients in President Obama's recipe.

To start, you need to chop up one large onion, one green pepper, and several cloves of garlic. These get sauteed in one tablespoon of olive oil until they're soft, and then you're to add one pound of ground turkey or beef. As Jess and I figured the turkey was a suggestion from Michelle as part of her campaign for cleaner eating, I decided to use beef to be truer to colleged aged Barack.

Finally, add one can of red kidney beans, and then let everything cook for a few minutes longer. The President suggests serving it over white or brown rice with shredded cheddar cheese, sour cream, and diced onions. 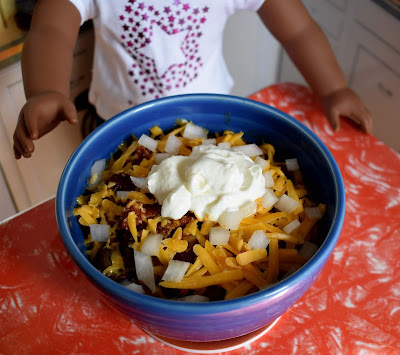 Despite my hesitation about the addition of some distinctly Italian flavors and the red wine vinegar, I was really pleasantly surprised by the end result. It definitely was recognizably a chili, and the flavors all harmonized nicely. It's definitely not the chili I'd make you if you came over to my apartment for dinner, but I'd happily eat this again. If you like a spicy chili, I do think the published version of the recipe toned the spices down to be more palatable to the less adventurous eater, so feel free to add more if you prefer a hotter chili. 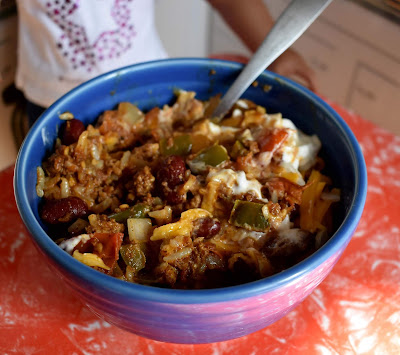 But one of the things I liked the most about trying this unusual but tasty chili was thinking about how much this totally felt like something a college kid could make with ease as long as they had access to a stove. The ingredients are cheap but filling, the final product is totally tasty, and it makes enough to have leftovers for days. It's also good for if you're having a party because it serves a crowd easily, and the President says he does, in fact, bring it to potluck parties. Or at least he did. Maybe being a former president is like a get out of potluck free card for the rest of your life?

I hope you've enjoyed this look at four dishes Cécile, Addy, Melody and Gabby might have enjoyed! I definitely had a good time making them. It's always great seeing how food and history intersect, and this was a great opportunity to pick out dishes that fit the character's stories and historical moments in time. 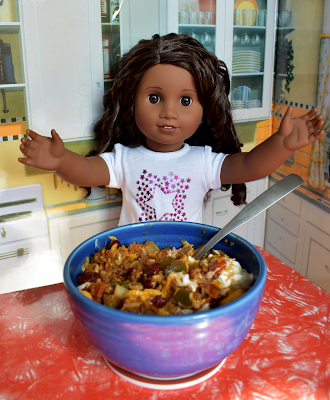