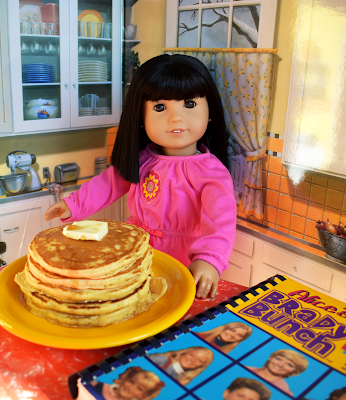 A treat straight from Ivy's family cookbook! Sort of...

In Julie's stories, it's mentioned that Mrs. Ling is famous for making ginger pancakes, and often treats Julie to them when she stays over at their house. I've been trying to make more historical recipes mentioned in the books themselves, and decided I needed to give these a whirl.

There was just one problem: my favorite (and currently only) 1970's cookbook with breakfast recipes in it told me to just make my pancakes with Bisquick, and that wasn't good enough for me. So I had to turn to a slightly unconventional source to find my base recipe for ginger pancakes. Read on to see how Alice's Brady Bunch Cookbook came to my rescue! 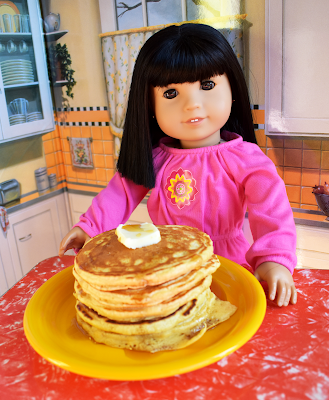 Bisquick is admittedly a very iconically 70's ingredient, but it's also a little lazy to share their pancake recipe with you on this blog. While Alice's Brady Bunch Cookbook was actually published in 1994, it's very much in keeping with the 70's flair of the original show. The recipes go from simple and stress free, to trying-to-be-healthy, to what passed for fine dining in 1974. There's nothing in the cookbook that'd be unfamiliar to Ivy and Julie, and it's definitely something I could see one of them gifting the other when they're in their 30's and looking for a fun present to surprise the other with in 1994.

The other reason I was excited by this recipe was that the pancakes in here are extremely, extremely basic, and so they're a great template to add your own spices, flavors, or fruit to the batter. I very specifically didn't want to make "gingerbread" pancakes, as the pancakes described in Julie's books are just ginger, not nutmeg or cinnamon, so I pulled out a big jar of powdered ginger and got ready to go to work.

To make these "Groovy Old-fashioned Pancakes", you'll need to beat two eggs until they're well blended. Add 5 tablespoons of melted butter and 1 cup of milk and mix everything together. In a separate bowl, whisk together 1 1/4 cups of flour, 1 tablespoon of sugar, 4 teaspoons of baking powders, 3/4 teaspoons of salt, and a couple heaping teaspoons of powdered ginger.

Add the wet ingredients and mix everything together until it's just combined, then cook them in a greased skillet as you would any pancake. 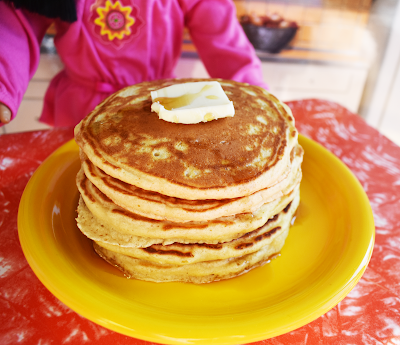 The recipe makes about fourteen pancakes, although I had a terrible kitchen accident and burned my thumb pretty badly in the middle of flipping a pancake, so we ended up with about a dozen instead of fourteen. The other two were total losses after my accident.

When the batter was wet, the ginger was very subtle, but it was definitely noticeable when the pancakes were warm and fried. If you want an even more intense flavor, fresh ginger would also probably work, and I'm very curious about what candied ginger might bring to the table. But this was a pretty good first attempt, so if you too have been wondering what it might be like to have a special breakfast at the Lings' house, this is a simple way to bring that vision to life. 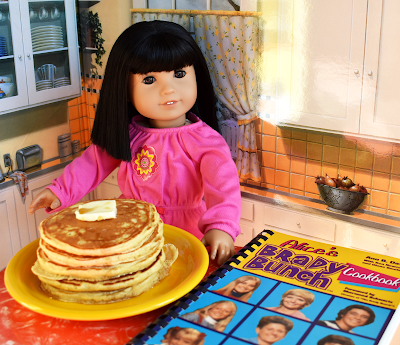 And is there any better way to spend a Saturday?
Posted by Gwen at 6:23 PM