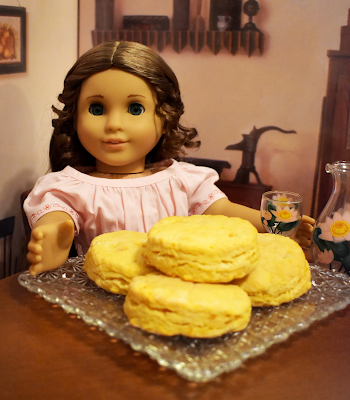 A sweet twist on an American classic?

I promised another sweet potato focused recipe in my last post, and here it is! I've had sweet potato cake, bread, and muffins before, but I can't say I've ever had the opportunity to try sweet potato biscuits before.

Biscuits in general aren't a huge part of my diet, although they're staples of American cuisine, particularly as you wander further south. Don't get me wrong, I like them a lot! But they weren't a staple thing on our dinner or breakfast table growing up, so they're more like a fun treat I get to enjoy at restaurants or on the rare occasion I decide to make them myself, usually for a blog post like this.

So, how do we make them? 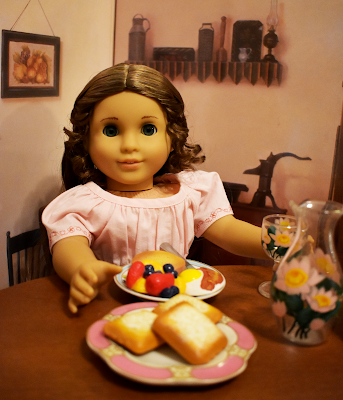 Besides the obvious southern connection to biscuits, this recipe made me think of Marie-Grace (and Cécile) because a friend of mine has been doing a lot of research into the doomed Franklin Expedition of 1845, which has inspired me to do some digging into the history of canned foods.

Canning was first invented in Europe in the early 1800's, and the practice quickly spread to the Americas. Just like many food trends, originally eating canned food was seen as a status symbol and a trendy new thing to indulge in. Governments found the method of preserving food - particularly meat - an ideal way to supply their militaries, and the Franklin Expedition famously stocked up on lots of tinned food to keep the explorers well fed on their journey to find the northwest passage. They never made it, and while we aren't entirely sure what happened to the expedition after their ships became stuck in ice, historically people have proposed that the lead used to solder the tins shut contaminated the food. They proposed that this caused many crew members to go insane and eventually die of lead poisoning.

Interestingly, more recent research has suggested that blaming the lead from the tinned food is actually untrue, as lead levels found in the mummies of a few of the crew members discovered by scientists are actually somewhat consistent with remains from other 1840's and 50's bodies that died of other causes.

In the 1850's, canned food was still seen as something of a novelty, so this recipe is definitely something I could see Marie-Grace coming across and being interested in giving a spin. As we've discussed time and time again, it also would let her try out another new cooking invention: baking powder!

Eventually, canned food became more affordable and appealing to the middle and lower classes as well, and now has come full circle into being something people turn their noses up at because it's not healthy, fresh, or as fancy as organic produce.

Some of this criticism is fair, but canned products can still come in handy for certain dishes, as they do in this biscuit recipe. You'll want to mash up one can of drained sweet potatoes with 3/4 of a cup of whole milk and set it aside while you take care of your dry ingredients. 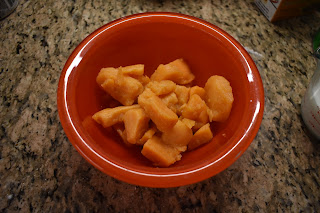 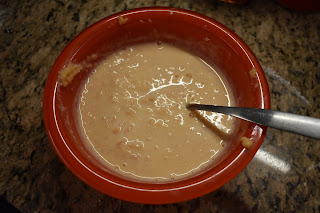 Sift together 2 1/2 cups of flour, 1 teaspoon of salt, and 1 teaspoon of baking powder in a bowl, and then cut 1/3 of a cup of shortening in with a fork or pastry cutter. Add your wet ingredients, and fold them all together just until everything's well combined.

Pour the batter out onto a floured surface and knead it eight to ten times before rolling it out to about 1/2 inch thick. Cut biscuits with your favorite biscuit cutter (or cookie cutter, or floured glass, whatever works!) and put them on a baking sheet to cook at 425 degrees. The recipe says they'll be baked in about eight to ten minutes, but mine took a lot longer to feel cooked through. 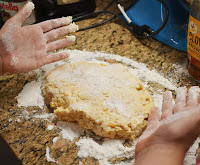 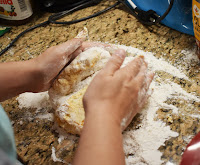 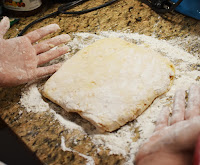 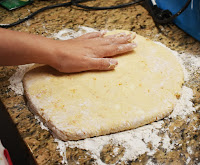 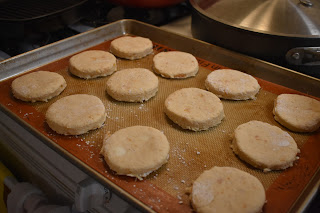 After about sixteen minutes, my biscuits were cooked through and looking pretty good! 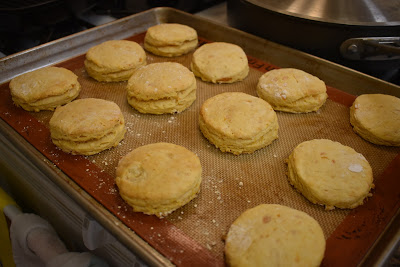 They didn't all puff up to get great flaky layers, but some of them did in a very satisfying way! 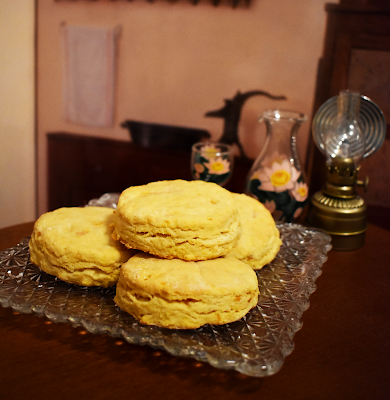 So, how did they taste?

Delicious! I'm not sure if they'd be better with fresh sweet potatoes, but the final product here is definitely tasty despite the canned main ingredient. They weren't super sweet, but they were definitely a little more flavorful than normal biscuits in a really pleasant way. They were pretty dense, which is to be expected with a bunch of potato mashed into the dry ingredients, but the texture was still nice and they paired well with some butter and honey... as most biscuits do.

So that is that! Hope you enjoyed this little twist on the traditional biscuit. They'd be a great addition to any brunch menu, and would definitely pair well with most dinners you might be throwing together too. Let me know if you give them a shot! 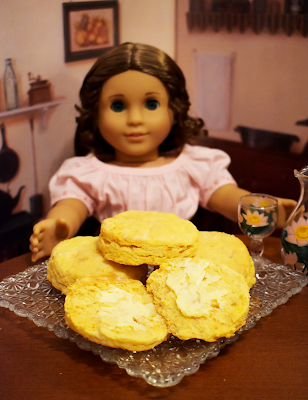 Meanwhile, I'll be polishing off the rest of mine!
Posted by Gwen at 11:27 AM